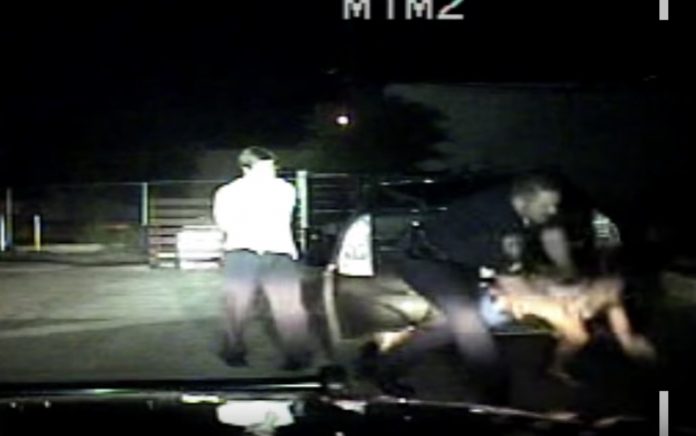 An investigation into the actions of a Texas AGW named James Palermo has found multiple incidents of Hut! Hut! Hutting! – most of them captured for posterity by the AGW’s own camera. Including one especially appalling incident depicting Palermo – who is a large man – gratuitously body slamming a young woman who is very small – face first onto the pavement.

After reviewing 176 cases, it was found that Palermo “like(s) to file resisting arrest” charges…

“… and we find that a lot of these people get hurt,” noted the lead investigator.

Who goes on to question why this “13 year veteran” does not understand the laws he is supposed to enforce nor that he has no lawful authority to make up and enforce laws on his own – “James Palermo’s penal code,” in the words of the investigator.

Palermo sits quietly – his Inner Bully tamped down in the presence of Authoritah exercised over himself.

The AGW was actually charged with a criminal offense – “aggravated assault by a public servant” – but only in one of the scores of Hut! Hut! Huts! caught on camera. The case involving the slightly built woman hurled face-first onto the pavement, which could easily have resulted in massive/permanent injuries – possibly even her death.

But Palermo was subsequently let off the hook on the sole charge.

He was given probation – no jail time. For brutally abusing a slightly built woman half his size who – watch the video – did absolutely nothing to menace this costumed thug but apparently didn’t display enough submission, soon enough.

Had that slightly built woman slapped the AGW, she would have spent time in jail.

One standard for them… a lesser one. Another for us… a far more stringent one.

Worse, this currently ex-AGW is not precluded from resuming his “work” as an AGW, which he is very likely to do since his “skills” have no market value. He will do the secular equivalent of the Pederast Priest Shuffle.

He will move to another county or city or state – where new victims await who have no idea what just arrived in their midst.