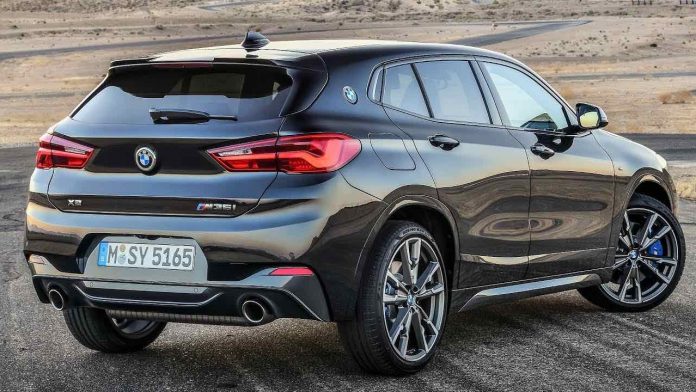 Well, first of all, you make it not quite the same – in order to appeal to two different buyers.

That way, you can sell the same basic car to both of them.

This is why for several decades GM successfully sold two versions of the Chevy Camaro – the other being the Pontiac Firebird. They were similar, but not identical. 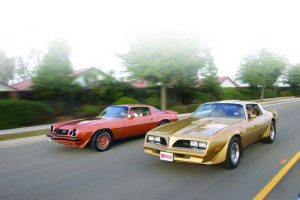 Camaro was the value proposition; it cost less and was more basic in terms of its amenities – but you got a lot of performance and style for your dollar.

Firebird offered a more upscale experience under the Pontiac label – as well as a much larger engine in the high-performance Trans-Am version of the Firebird.

Both Camaro and Firebird sold very well – because they complemented one another rather than competed with one another.

Today, on the same principle, you can buy the Mini Countryman – or get the same basic thing in a more upscale package – and with a much stronger engine: 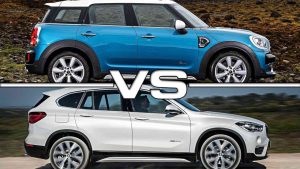 The X2 M35i is basically a Mini Countryman with the optional John Cooper Works (JCW) performance enhancements  . . . enhanced even more.

And dressed in BMW sheetmetal.

Both are compact-sized, five-door wagons built by the same parent company (BMW owns Mini) and share a common under-the-skin platform, or basic architecture.

And they’re both powered by the same basic 2.0 liter turbocharged four cylinder engine. 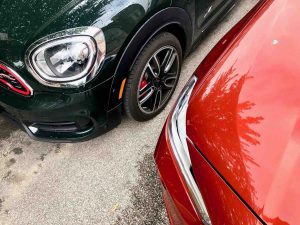 But the BMW’s version of the four is packing at least 302 horsepower vs. 228 for the JCW Countryman’s. The BMW also comes standard with all-wheel-drive and an eight-speed automatic – vs. optional AWD and a standard manual transmission in the Mini.

Plus things not optional in the Mini – including an exhaust wastegate (more below) and BMW “M” upgrades such as 20-inch light-alloy wheels and bench-vise Brembo brakes.

Both have about the same interior space – and cargo space – but each has its own very distinctive appearance, inside as well as outside. 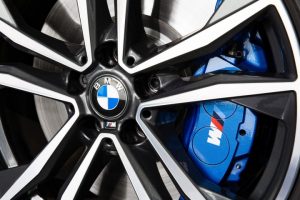 Their respective prices are distinctive, too.

But it’s a BMW, after all  – and while the Mini is very nice, the BMW is even nicer.

As well as much quicker. 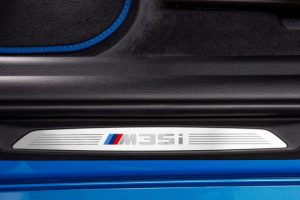 You can also get an X2 28i – which is the same thing without standard AWD and with a lower-output version (228 hp) of the turbocharged four cylinder engine.

A very different look – inside and out.

Better mileage than the lower-powered Mini’s.

Countryman is available with a manual transmission. 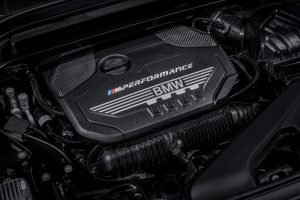 The M35i’s 302 horsepower turbocharged four is one of the most powerful engines of its size you can buy – and the M35i is among the quickest compact wagons you can buy.

As always, speed is a question of money. How fast do you want to go?

But it won’t cost you more for gas. Surprisingly, the M35i’s 23 city, 29 highway MPG rating is slightly better than JCW Countryman’s 21 city, 30 highway.

And BMW may be giving you some free horsepower.

The M35i – like all new BMWs – has an in-car dynamometer, a gauge that indicates how much power (horsepower and torque) the engine is making at any given moment. You can find this under the Sport displays available in the secondary LCD cluster, to the right of the main instrument panel. 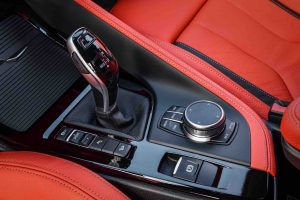 During my weeklong test drive I noticed that the maximum reading on the gauge during WOT runs was 310 horsepower. German engineers are precise people. I suspect the gauge is very accurate. And it indicated more-than-advertised horsepower. Which jibes better with the M35i’s actual performance. The advertised 74 hp difference between the M35i and the Countryman JCW doesn’t quite account for an almost two second difference in zero-to-60 times.

The gauge – and the timeslip – tells the truth.

BMW people are aware that this is common practice – that BMW often understates the actual output of its engines, especially the engines in M vehicles. 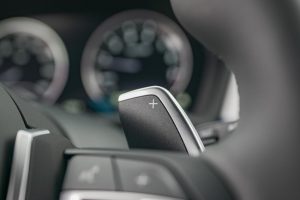 Anyone who complains about this is the kind of person who gets upset when he finds an extra $20 in his wallet.

Some may complain about the M35i being automatic (and AWD) only.

The reason for the first has to do with BMW’s corporate attitude – which reflects the efficiency mindset of German engineers. Automatics are more precise than manuals and perhaps most important, they are more consistently precise. A human driver who knows his trade can execute a perfect launch and nail each upshift, spot on. But can even the best human driver do that every single time? All the time?

No, he can’t. And this matters to BMW – as it does to all car companies – because it affects fuel economy numbers as well as performance numbers. An automatic can be programmed to peg the numbers – and thereby achieve compliance with federal fatwas. 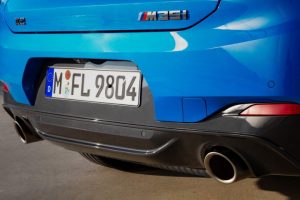 And it’s precisely why the much more powerful BMW gets noticeably better mileage than the JCW Countryman with the manual.

Of course, shifting for yourself is still more fun – and sometimes, that matters more than mileage stats or even 0-60 times. Here the Mini has an edge – because you can still get it with a six-speed and a third pedal.

As for AWD – there’s only so much the front wheels can handle. It is hard to go fast in a straight line when the car is jerking sideways – torque steering – due to the front tires having a time hooking up all that power and trying to keep things pointed straight ahead.

There is a reason why there are no 300-plus hp FWD cars on the market. What good is power you can’t control? 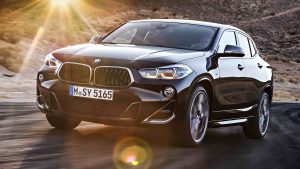 Including the sound of performance.

The M35i has an active exhaust system – which means a baffle that works like a turbocharger’s wastegate. It pops open to relieve backpressure – and let the engine make maximum power.

It also makes a wonderful point about the things we’ll miss if electric cars are successfully force-fed down our throats – which they have to be, precisely for this and other reasons. 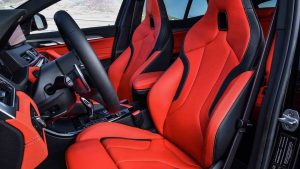 Part of the joy of performance is the sound of it. Silent performance is for elevators and dishwashers. Each trumpet blast of spent exhaust gasses from the M35i’s tailpipes is a kind of war whoop exultation and as critical to the experience as having the volume on when you’re listening to the stereo.

There is also the distinctiveness of the engine itself – as opposed to the motor (in EVs). An IC engine has its own specific character – power peak, torque curve – the intangible how it feels as you go. Electric motors all feel the same. DeWalt vs. Makita.

No shifting at all, either. 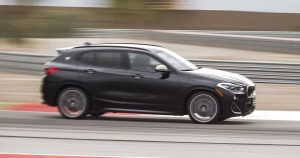 If you miss the clutch in the M35i you will really miss the gears in the EV the government (it’s not the car industry; they’re just acquiescing to the government)  is trying to force down your throat. An electric motor has just one speed – and you don’t need to shift it. Not much to do in one except push the accelerator down – and keep an eye on the rapidly decreasing range. This will give you time to think about where you’ll spend the next several hours waiting to recharge.

In the M35i, you can think about which road you’ll abuse next – as you wait 5 minutes to refill the tank.

The M35i is based on the FWD-based Countryman – and so it, too, is based on a FWD layout. It’s a bit nose-heavier vs. rear-drive-based BMWs and inclines more toward understeering than oversteering when cornering near its limits. But its grip threshold is very high for a wagon, – especially with the optional 20-inch wheel/tire-package. 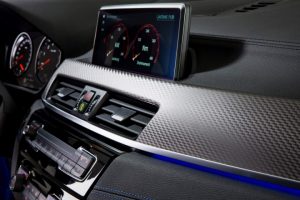 It is also noticeably less bouncy than the JCW Countryman – even though both cars have identical wheelbases and share underpinnings developed by the same engineers. This may be and probably is due to the Mini’s ground-scraping 5.7 inches of clearance vs. the BMW’s 7.2 inches. Put another way, there’s more suspension travel – and so ability to absorb bumps – underneath the BMW.

Even with the inch-high-sidewall tires on those 20-inch wheels.

And the additional inches of ground clearance give the BMW a huge advantage when it’s time to slow down  . . . when it’s snowing. 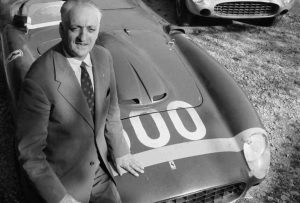 The Mini does have one advantage over its BMW brother, however: Better rearview visibility –  because it has more glass area and less slope to its roof. Of course, there is also the saying attributed to Enzo Ferrari when someone complained about the same problem with his cars:

What is behind me does not matter! 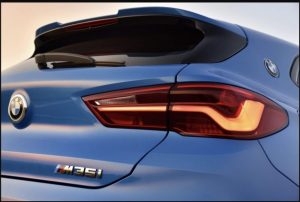 The M35i has a dramatically low roofline – its signature styling feature –  but first and second row headroom (39.8 and 37.1 inches, respectively) is about the same as in the taller-roofed Countryman (39.9 and 37.5 inches).

You can adjust the headroom, too, by opting to skip the otherwise standard panorama sunroof. The BMW’s front seats also have generous vertical adjustment such that even with the sunroof, a very tall guy like me (6 ft 3) doesn’t have to hunch down to avoid head-butting the ceiling.

Both cars have about the same first and second row legroom – but the BMW’s slightly longer overall length (172.2 inches vs 169.8 for the Mini) gives it the edge when it comes to cargo room. 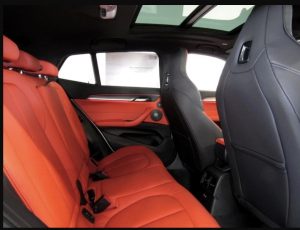 Either way, it’s a lot of space.

A current mid-sized sedan with a much larger overall footprint (on average, about 190 inches in length) will generally have no more than 14 or 15 cubic feet of trunk capacity.

The other thing you get is less tangible but no less important: A distinctive look. The M35i does not look like the Countryman and neither looks like other cars. That is no small thing given how same-same so many new cars look. 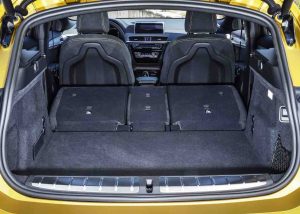 Another area of aesthetic distinctiveness is the M35i’s traditional main gauge cluster. Dials and needles rather than digitized displays. There is no question you can display more info using an LCD screen – which can be configured multiple ways – but there is also no question that needles and dials are easier to read and less distracting.

This car is about driving – not toggling through menus to keep your mind off the drive. 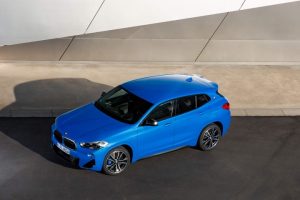 As a high-end BMW, the M35i comes with almost every imaginable luxury feature – but is missing one convenience feature that ought to be standard in any luxury car and usually is in most economy cars – AppleCarPLay.

It’s available, but optional. You have to buy a subscription.

The cost is minor but it’s petty of BMW to charge extra for this.

A faster – fancier – Mini is now available at your local BMW store!