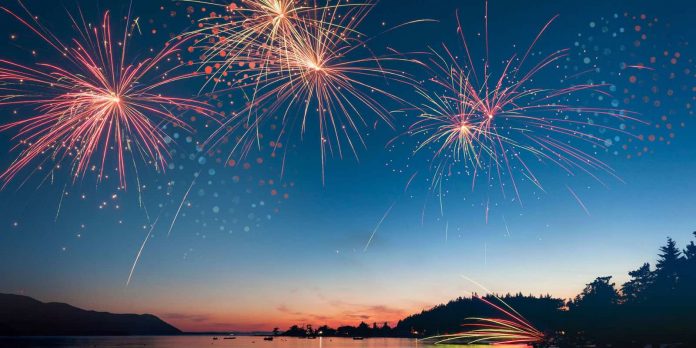 Today is Independence Day, so it seems a good time to ask: How independent are we? Put another way: What are we free to do – and not do?

Orwell wrote that freedom “… is the right to tell people what they don’t want to hear.” And also that two plus two equals four rather than five.

But there is a more foundational freedom and it comes in two co-equal parts. The first part is the right to say No. The second part – without which the freedom to say No is a functional non sequitur – is that your No be respected. In law. By law. 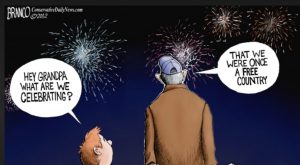 We are free to say, No of course – in the manner of a woman being raped … who is raped, regardless. The trouble is the rapist’s indifference to the woman’s protestations. The ineffectiveness of her No.

Americans used to be able to say No effectively.

They were once free to say No to health insurance, for instance. Which is a reasonable thing to say for many, such as the young and healthy – who can reasonably bet they won’t require expensive medical treatment and so prefer not to spend their limited resources on expensive insurance.

The fundamental thing being that their right, as individuals, to say No was respected.

Whether you – or others – agreed with their decision being functionally immaterial. Other people were required to mind their own business – and leave you free to mind yours.

That principle is now soundly rejected by perhaps a majority of Americans – who believe because they say Yes others must be punished for saying No. 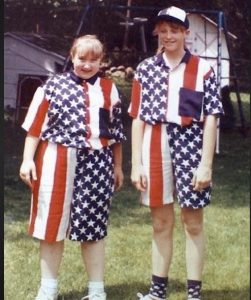 This has its ideological basis in the doctrine of majority rule, which forms the basis of democracy – something America was never meant to be. Which is another thing Americans, in general, no longer understand.

The very word – democracy – was considered almost pejorative by most of the Founders, who loathed the practice. It is nowhere to be found in the Declaration of Independence nor the Constitution, the latter allegedly the law of the land.

Or even, for that matter, the Pledge of Allegiance, which was written by a socialist.

It refers to the republic, not the democracy.

It is an important distinction. Republics respect the freedom to say No by accepting it without applying punishment or its threat – duress – for so saying. They acknowledge individual rights as not subject to a vote – no matter how many votes are taken. 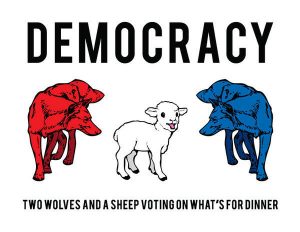 Which means he has no meaningful freedom to say it.

There is a tepid form of No we are still allowed to say. It is the choice of alternatives presented by the majority – or those who claim to represent it but often don’t. It is a wicked irony of “democracy” that in practice, minorities rule.

For example, the choice at the ballot box between the overlord presented by Party A and the overlord presented by Party B. These are conjured by the minorities who control the inner workings of the allowed parties. The candidates of these minorities are then brought forth and a vote is taken, often with the winning candidate determined by a minority of the eligible-to-vote populace.

The chief overlord – aka the president – is determined by a vote of approximately half those eligible, that half cleaved very close to 50-50, with the winning overlord determined by – typically – something like 26 percent of the 50 percent.

We have no meaningful choice to say No to any of this – and have our No respected in the form of being left alone by all of them.

At almost every turn, our No is countermanded by you will – or else.

And Americans celebrate – to the degree they are allowed to – even on what is supposedly “their” property but isn’t since they’re not free to say No to taxes in perpetuity on their property in exchange for services they didn’t contract for and would decline . . .  if they were free to say No.

An appropriate analogy on this day of independence denied would be feed lot cattle clicking their heels and lowing in pleasure, not conscious of the absurdity – nor the next step in the their travels.