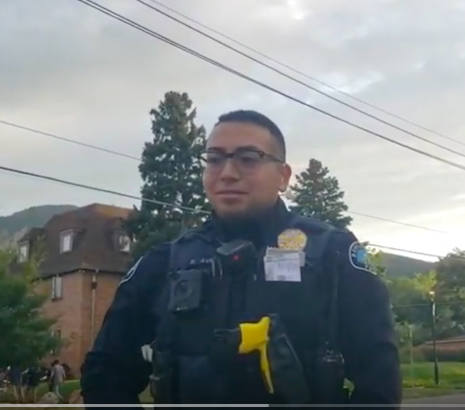 A guy drinking a can of soda is almost Hut! Hut! Hutted! by a pair of armed government workers dressed to the nines in the very latest police state gear – multiple magazines at the ready; body armor. Taser mounted quick-draw-style and at the ready.

This is the country we now live in now. One in which people can’t even walk down the sidewalk without heavily armed government goons accosting them. These two evince the contempt for the people they “serve” and “keep safe” by mocking the man for expressing concern about being confronted by a pair of armed thugs with a literal license to kill.

Ask yourself what form of two-legged cockroach would perform such “work” – and behave this way. These two are exactly the sort who would kick down doors to “secure” no-longer-allowed firearms; would herd people into busses.