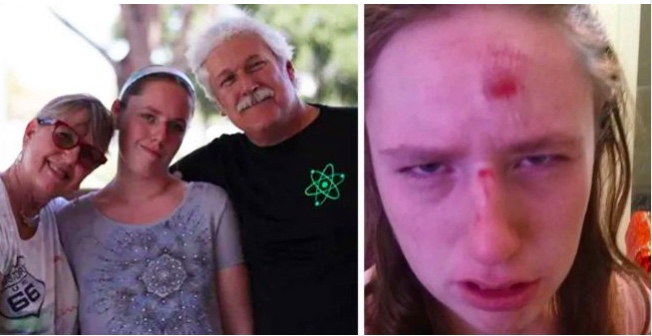 Here’s an especially appalling story about a pair of Riverside, CA armed government workers who brutally “took down” a 19-year old autistic girl whose only “crime” was ignoring their illegal orders.

Michelle Chartrand, 19, was walking home from school – not an illegal act, yet – when she was accosted by AGWs, who began asking questions and demanded she identify herself.

According to the Desert Sun:

On Aug. 30, 2018, Chartrand was dropped off by her mother at Summit High School in La Quinta to attend a job training for people with learning disabilities. Soon after arriving, two Desert Sands Unified School District security officers received reports that Chartrand had left campus and was walking home, according to the complaint (subsequently filed by her parents in U.S. District Court).

Chartrand told The Desert Sun last year that she struggles with academics, grew upset during the training and decided she needed to walk to her home, which was about three blocks from the school.

According to the Sun, school security called AGWs, who confronted her and when she tried to walk by them, was violently grabbed by the AGWs, who ululated their usual “stop resisting!” while hurling the girl to the pavement.

According to the lawsuit:

Plaintiff Michelle Chartrand—an autistic member of the Riverside community—suffered injuries as a result of an encounter with law-enforcement officers at her school. Despite having no reason to forcibly detain and arrest Plaintiff—and fully aware of her disability—officers for the Riverside County Sheriff’s Department wrestled with Plaintiff, tackled her to the ground, handcuffed her, and caused her head to strike the concrete pavement. Plaintiff suffered injuries as a result. She requests a jury trial to pursue justice on the claims detailed in this complaint.

The AGWs claim is that they acted to keep Chartrand “safe.”

AGW spokesman Chris Wilson told media in the aftermath of the incident that the two AGS merely “… attempted to contact the woman, however, she walked past one of the officers and onto Fred Waring Drive, directly toward the morning traffic.”

“I pressed the crosswalk button and waited for the walking icon to pop up,” she told The Desert Sun last year. The sheriff’s deputies “thought I was acting crazy, but I wasn’t. I looked both ways before I crossed the road.”

Regardless, the fact is Chartrand committed no criminal act; was not suspected of any criminal activity. She was walking down the sidewalk, minding her own business – and as a 19-year-old, was a legal adult and under no obligation to speak with or even slow down for the AGWs.

She had every right to attempt to walk past them – and the AGWs had no right to put their hands on her, let alone hurl her bodily onto the pavement.

But her rights – and yours and mine – are meaningless in the face of the unlegislated but very real “law” that we must Submit & Obey. That AGWs are the “law” – and we disobey the “law” at our peril.