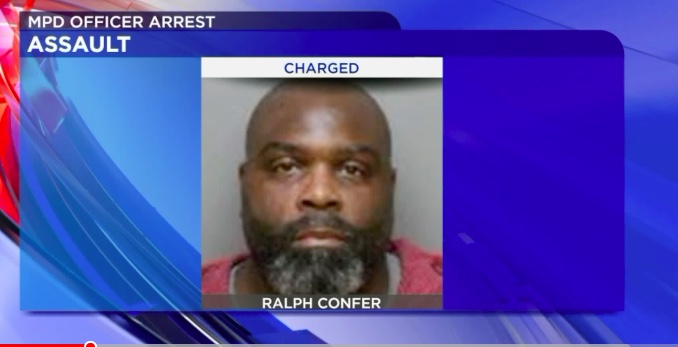 Armed government workers are very territorial; like rabid junkyard dogs, they froth at the mouth, snarl and snap their jaws when anyone invades what they consider to be “their” turf.

This occurred the other day in Memphis, TN when an AGW named Ralph Confer attacked a woman who had the temerity to wander past a cookout being held at the Regional Medical Center. The woman – a med tech who works at the hospital and so had every right to be at the hospital – asked one of the employees having the cookout whether she could have a hot dog.

She was told yes, but AGW Confer said no.

She left but came back a few minutes later and asked again and was told – again – that she could have a hot dog, so she got one and was in the process of adding condiments when an enraged Confer appeared and “slapped the bun from her hand and told her she couldn’t have any food,” according to local news report about the Hut! Hut! Hutting!

Confer then picked the woman up off the ground, smashed her head into the ceiling, threw her onto the ground, then threw himself onto the woman, kneed her in the back and placed her in manacles.

The victim suffered multiple bruises and a hematoma.

Luckily, she was not summarily executed for “resisting.”

Confer – a thug with severe anger management problems – clearly has no business being allowed near authority much less firearms. He was subsequently arrested and charged with aggravated assault but has not been fired and continues to feed on the taxpayers – including the woman he assaulted.

A tragic aspect of this case is that the people who witnessed this Hut! Hut! Hutting! dared not risk intervening to help a woman being attacked by a man twice her size and probably three or four times her strength.

Had they done so, the “hero” would likely have uttered the Magic Words – I feared for my safety! – and shot them all dead.

And been absolved of any responsibility for it.

AGWs are de facto (and practically de jure) untouchable. By the law – or by us. No matter the law.

Or what they do to us.