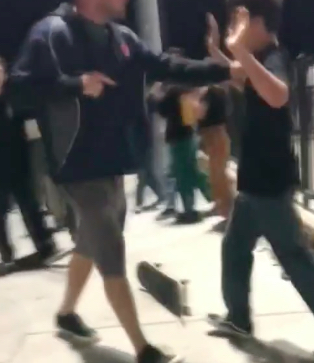 Those who believe trigger-happy armed government workers are just a few bad apples might want to have a look at the orchard.

Another AGW has been caught on camera threatening to kill a scrawny teenager, promising to “shoot him in the fucking face” for not being sufficiently submissive.

The incident was caught on camera, so there’s no question that the kid represented any kind of “threat” to the “safety” of the AGW, who pointed a loaded gun at the kid’s face over some loud music and the kid backing away from the AGW.

Failure to Submit and Obey immediately being a capital offense (see: Amber Guyger and Aaron Dean, who shot Atatiana Jefferson to death in her own home last week after perfunctorily screaming at her to “show me your hands!”  . . .which he gave her no time to do before shooting her to death.)

This kid is very lucky he wasn’t shot to death. The AGW was itching to do it and probably only prevented from doing it by some dim comprehension that his actions were being video recorded. Had this occurred in an alley somewhere and with no cameras around, the AGW probably would have ended the kid and said he “feared for his safety” when the kid “resisted.”

“I was right next to the kid that he pulled the gun on,” said one of the other kids whose lives were threatened by the armed and dangerous AGW.

In the video, the boy in the black t-shirt is seen on his knees with his hands in the air.

“[The teen] got on the floor, did exactly what the man said. The man never identified himself as an officer to my friend…just kept aiming his gun and being more and more aggressive,” said one of the other teens.

The Orange County Sheriff’s Department said in a statement:

“Orange County Sheriff’s Department employees are expected to conduct themselves with professionalism on and off-duty. We take this incident seriously and will fully investigate.”

The AGW has not been arrested. He is reportedly on “administrative leave.”

The Orange County Sheriff’s Department apparently thinks it’s acceptable – and certainly not criminal – to draw a gun on and point it at a kid over loud music and skateboarding.

It would be a felony for anyone not wearing a government-issued costume. Such a person would certainly be “red flagged” and have his guns seized – reasonably, given these circumstances.

But because the circumstances involved an armed government worker, there’s no crime – or even a firing. And in all likelihood, this unstable, dangerous individual with anger management issues will be “serving” the community again after a few days of paid vacation awarded for threatening to murder a kid.

We are told by people like “Beto” O’Rourke that we can’t be trusted with dangerous weapons.

I’d certainly feel a lot safer if their guns – and license to kill – were taken away.