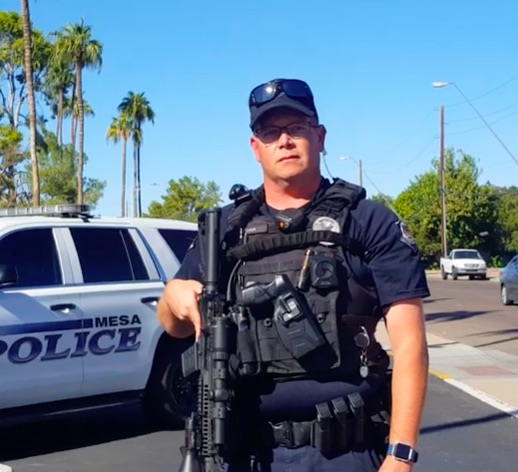 Here’s video of an Arizona armed government worker swaggering around with an AR-15 (finger poised over the trigger) for no apparent legitimate reason. He’s also carrying two pistols, multiple mags and all the usual Tacticool kit, including body armor.

It appears a “welfare check” is being performed – by a squad of heavily armed men who look like they’re ready to invade Grenada.

The men video recording the scene aren’t especially coherent but their real crime is affronting the Authoritah of this real-life GI Joe wannabe. Who isn’t a “real American hero.”

They are lucky to have escaped with their lives.

We have been Stockholm Syndromed and gaslit into accepting as normal the transformation of what was once upon a time civilian police into an occupying soldiery little different in appearance and attitude toward the occupied than German soldiers in Poland circa 1940. These are not fellow citizens who are charged with keeping the peace. They are brutal enforcers – they use exactly that term to describe themselves.

One cannot reason with an enforcer.

A start would be to revert to less violent language. People often assume the roles described by the words. Doing away with enforcer would likely lead to less . . . enforcement. And doing away with the accoutrements of soldiery –  weapons of war, such as AR15 and the carrying to multiple magazines just like a soldat of the Waffen SS  – as well as the preposterous and dangerous practice of awarding “ranks” to people who aren’t in the army – would serve to further de-escalate things. 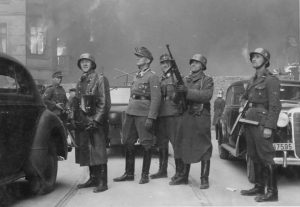 There is a false narrative that all this Hut! Hut! Hutting! is necessary because of “the times.” But the fact is violent crime is lower now than it was back in the ’90s; the main threat to the safety of us – the people – are militarized enforcers imbued with a paranoiac fear of the populace, who have been encouraged to regard us as the enemy and a perpetual “threat” that must be met with Shock and Awe at the first display of the slightest lack of “cooperation.”

Which – to them – is synonymous with failing to remove our caps and bow our heads like Warsaw ghetto juden.

Enforcers are anathema to a free society – which is why America is no longer that. It will never be that, again, so long as there are enforcers.