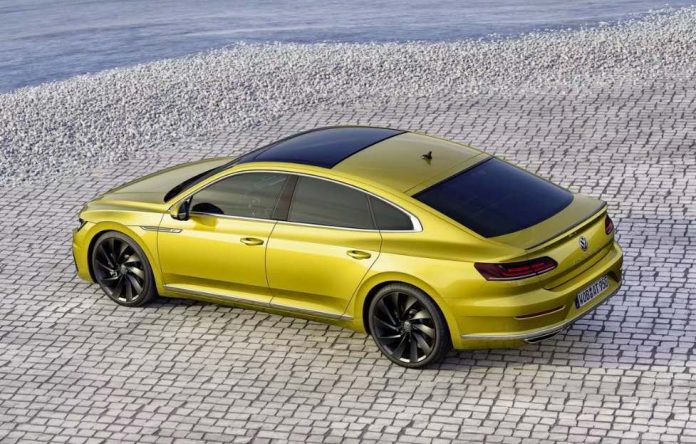 Top-of-the-line cars used to almost always be sedans, but that layout has fallen out of favor because of the modern sedan’s comparatively small trunk – and limited versatility. Even long-time big-sellers in the family car segment like the Toyota Camry and Honda Accord sedans are struggling – arguably for the same reason.

Which is probably why VW decided to make its new top-of-the-line Arteon sedan a hatchback.

VW calls it a “Gran Turismo” with “coupe-like styling,” because that connotes better. But the function – and purpose – are the same.

Compared with the almost identically sized Passat sedan – which has a trunk –  the Arteon has three times as much space for stuff.

It also has much more power – as well as some things you never used to be able to get in a VW, like a massaging driver’s chair.

Not even the $70k Phaeton had that.

And this new Arteon costs tens of thousands less than that. 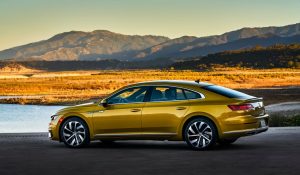 The Arteon is VW’s new “halo” car –  industry-speak for a top-of-the-line model. It’s VW’s first post-Phaeton (and Comfort Coupe – which was also a sedan) attempt at a high-end model . . . this time with a price more in line with VW models, VW buyers’ budgets – and sensibilities.

It’s about the same size as the Passat sedan, so mid-sized edging toward full-size – but comes standard with one of VW’s most powerful engines and offers AWD, which is no longer available in the current Passat.

It also offers luxury car stuff – like the massaging driver’s seat mentioned earlier – that you generally have to spend luxury brand bucks to enjoy. 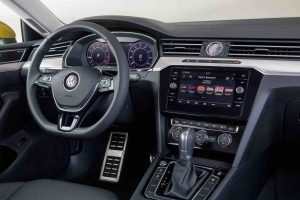 Prices start at $35,845 for the SE trim with turbocharged 268 hp engine and front-wheel-drive.

The Arteon is all-new, as is its position at the top of VW’s lineup.

Sleeker – and more practical – than the Passat.

Second row as roomy as first, both leg and headroom-wise.

Minor price bump to get AWD in SE and SEL trims.

Massaging seat (only the driver gets a back rub) is limited to the SEL trim, which starts at $44,945.

Slinky stance – just 5.4 inches off the pavement – cancels out much of the winter-weather advantages of AWD. 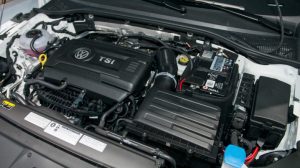 All trims come standard with a 2.0 liter four cylinder engine paired with an eight-speed automatic transmission and your pick of FWD or AWD.

For cross-shop purposes, the current Passat’s version of the  2.0 liter engine only manages 174 hp.

Not surprisingly, the Arteon is much quicker than the pokey Passat. Zero to 60 takes about 6 seconds vs. more than eight for its less muscular same-sized brother.

The bad news – if you care about such things – is that the Arteon uses noticeably more gas: 20 city, 27 highway vs. 25 city, 36 highway for the less powerful but more parsimonious Passat.

Some very good news: The Arteon’s engine is direct-injected but has a separate port-fuel-injection circuit – there to to nip any potential carbo-fouling problems from the DI system (which is there for fatwa-compliance reasons) in the bud.

Back to the boost. 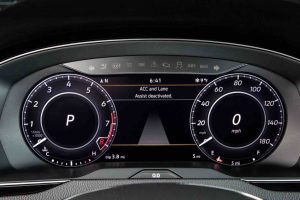 The Arteon’s engine is pressurized to an almost Indy Car 31 psi under full throttle. That’s what it takes, apparently, to get the power of a six out of a four. Put more precisely, to maintain the power of a six while getting rid of sixes.

VW – the entire car industry – is facing crunch time. How to maintain the power/performance that buyers expect – while also complying with the strong-arming fatwas of government?

Note that VW no longer offers its 3.6 liter V6 (which made 280 hp) in any of its new passenger cars – including the Arteon or the Passat. 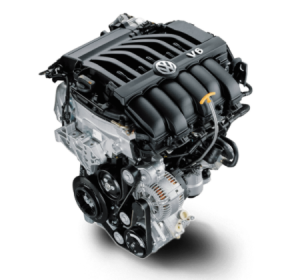 The reasons for that having to do not with lack of buyer interest in sixes – or horsepower – but rather with federal fuel economy fatwas, which have sleazily morphed into “emissions” fatwas. The IC engine is getting smaller – with the aim being to make it disappear altogether.

In favor of the electric motor. Which is allegedly “cleaner” than an IC engine because it creates no carbon dioxide – locally. At the power plant (and open pit mine) is another matter.

It’s possible to make an IC engine run so cleanly it produces almost no harmful emissions. More than possible. It has been achieved. 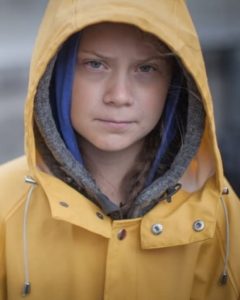 But it is not possible to make an IC engine that doesn’t produce carbon dioxide – the new “emission” that’s being substituted for the old (under control) ones precisely because it cannot be eliminated without also eliminating the IC engine.

Carbon dioxide can’t be chemically converted into something inert, non-reactive and harmless in terms of air pollution (as has been done with real emissions, the ones that do cause or worsen air pollution) because C02 already is an inert, non-reactive and harmless gas, in terms of the fractional contribution of cars to the less than 1 percent of the Earth’s atmosphere that is C02.

But smaller, less C02-producing  engines also produce less power  . . . unless they’re goosed via boost –  to make up for their smallness when power is demanded. This does the trick but it’s also a bit unnerving. 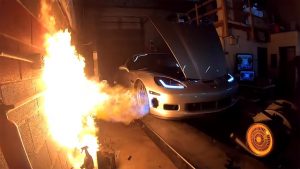 We’re now up to boost levels previously found only in very high-performance cars like Porsche 911 turbos, Mitsubishi EVOs and Subaru WRX STis – in family sedans and luxury cars like the Arteon.

It will be interesting to see how these heavily-boosted little engines hold up over the next 10-15 years.

These big-boosted engines don’t feel it. They just feel . . . big.

Because, of course, the boost is. 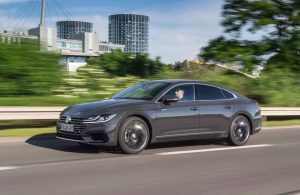 Their power output is comparable to that of the larger engines force-retired by the fatwas and their delivery is better. Note that the peak torque output of the Arteon’s 2.0 liter engine (258 ft.-lbs., identical to the torque made by the old 3.6 liter V6) is made about 500 RPM sooner in the powerband (at 1,950 RPM vs. 2,500 RPM).

Thus, the Arteon gets going with less apparent effort – despite having less engine.

The most astonishing thing, though, is how smoothly all that boost is applied. In the old days – you know, ten years ago – a car running 30-plus pounds of boost would have the power curve of fire hose. 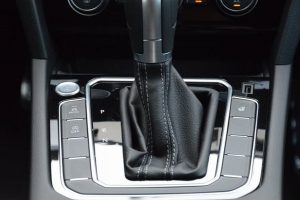 Not so much in luxury car.

Engineers work miracles. They have pumped things up – without (unlike steroids, say) apparent downsides. And they have dialed out the turbo lag and the previous peakiness that usually came with the a heavily turbo-boosted and tiny engine. Even the whistle is gone. There’s no indication from behind the wheel that there isn’t a V6 under the hood. More importantly – in the case of a car like this – that there isn’t a four under the hood.

VW didn’t even have to resort to the mechanical equivalent of the Little Blue Pill – “auditory enhancement,” via the sound system – to make up for the lack of good sounds being made by the little four.

Because it actually sounds good! 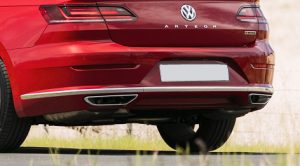 Something that is there – inside – is a traditional T-handle gear selector, which is becoming a hard-to-find thing in luxury cars and even just cars, generally.

The T handle is agreeable because it’s tactile. It’s more intuitive to move a handle forward and back and feel the positive engagement of the various detents for Park, Reverse and Drive than it is to turn a tactile-less knob or tap a toggle with no physical feedback at all that makes you look at an electronic readout to ascertain what gear you’re in.

Most of the major functions – such as the climate controls – are still controlled with knobs and buttons. 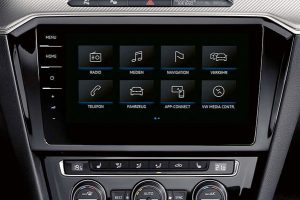 You also get visibility – something lacking in many new cars, regardless of price. The Arteon has frameless door glass – an elegant touch that’s getting hard to find outside of the luxury car class – and the door tops aren’t as high as your chin. In fact, they’re low enough that you can open the frameless door glass and rest your elbow on them, if you like.

One other thing about the Arteon’s that’s even more relaxing than being massaged is not being pestered by overly pre-emptive “assistance” technologies. The Arteon, like all new luxury cars, has these “assists” but their intrusions are less frequent and far less 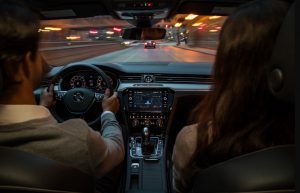 For example, you will feel the steering wheel move slightly, occasionally, when you stray a little out of your lane or don’t signal before you change lanes (Lane Keep Assist) but the wheel doesn’t jerk abruptly in the direction the car thinks you ought to be headed. Likewise, the Emergency Brake Assist doesn’t “assist” unless you’re actually pretty close to something you might hit – as opposed to other systems that slam on the brakes because a car 50 yards ahead just tapped its brakes.

VWs are attractive cars. The Arteon is a beautiful car.

It looks like a supermodel who hasn’t been discovered yet, just wandering around the shopping mall.

Which means you can still date her.

It is also a strikingly practical car. Though almost exactly the same overall length as the Passat (191.4 inches vs. 191.9 inches) the Arteon’s interior space is both more generous and more evenly allocated.

The first and second rows have about the same legroom (41.2 inches and 40.2 inches) as well as nearly the same headroom (37.7 inches up front and 37 in back). It’s often the case that the second row not only has noticeably less legroom, but that headroom is noticeably less as well because of the angle of the roof – which (in a sedan with a trunk) tends to angle down more sharply and abruptly. 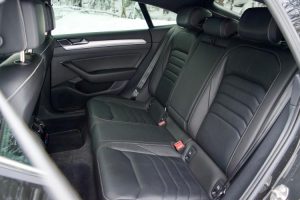 This is true in the Passat – and was true in the old Comfort Coupe, which actually wasn;t so comfortable… if you had to ride in back.

If you lower the rear seatbacks, the Arteon has 55 cubic feet of cargo-carrying capacity – comparable to a crossover SUV of about the same overall size – vs. just 15.9 cubic feet in the trunk of the Passat (and just 13.2 cubic feet in the old CC).

Even with the back seats up, the Arteon has 27.2 cubic feet of cargo space – almost twice the Passat’s best-case capacity. 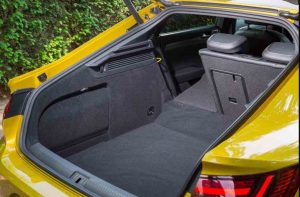 There is also the luxury part, which includes standard three-zone climate control and an elegant glass (not plastic) faced secondary touchscreen that you don’t even have to touch. You can use gestures to control some of its functions.

The Arteon is one of the few cars you can buy for less than $50k that offers a massage feature. But it’s only offered to the driver. Usually, massaging seats (like heated seats) are offered in pairs. 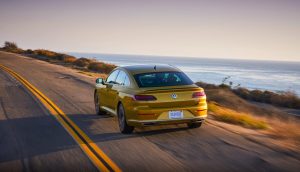 Some reviewers believe the Arteon – like the old Phaeton- is too pricey to be a VW. Well, to sell under the VW label. The counterargument to this is that the Arteon costs literally half what the Phaeton did – and about the same as a loaded Camry or Avalon does.

VW has also stepped up its warranty coverage across the board (all models) to six years and 72,000 miles – better coverage than almost all luxury-badged cars. 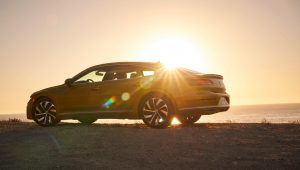 Another thing the Phaeton didn’t have.

It’s nowhere near as pricey as the Phaeton – but more luxurious. It’s even prettier than than the old Comfort Coupe – and the current Passat – and a lot more practical than either.

VW may finally have hit the spot.

How EVs Don’t Save Money

The Song an EV Will Never Sing 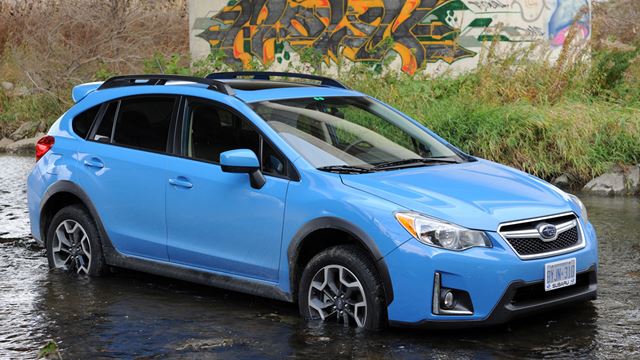