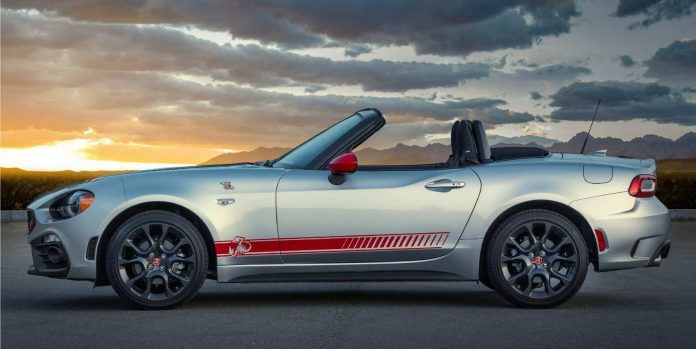 People who buy economy cars don’t especially care that lots of other people are driving the same car; if anything, it’s confirmation that they bought the right car.

But people who by sports cars want more than just a great car; they want to be driving a different car.

This is the Mazda Miata’s curse . .  of excellence.

It’s arguably one of the best sports car values ever – and without question one of the best sports cars ever made, period. For the cost of a Porsche 911’s options you get a car that can run with the 911 anywhere there’s a bend in the road. That doesn’t need $5,000 of “scheduled maintenance” every six months – or ever. That as economical to drive every day as a Corolla, just a lot more fun. 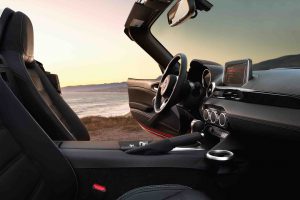 But for just those reasons, almost everyone seems to have a Miata. Which detracts  a bit from the excitement of owning one.

If you’d like to have one that almost no one else has, then have a look at this one – the Fiat 124 Spider.

Mazda doesn’t just sell Miatas to its many customers; it also sells a few of them to Fiat – which re-sells them under its own label, as the 124 Spyder.

The good news is this isn’t a just a re-sell. It’s a different sell. 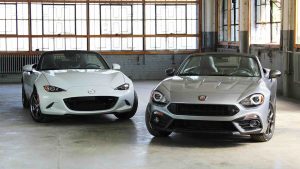 The 124 is powered by a Fiat-built 1.4 liter turbocharged engine – and has Fiat-specific exterior and interior styling elements as well as some uniquely Fiat personality touches, such as the open-piped Harley exhaust bellow of the high-performance Abarth version.

Everyone will hear you coming.

You’re also much less likely to see one parked in your neighbor’s driveway. 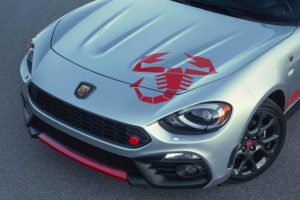 Prices start at $25,390 for the Classica trim with a six-speed manual transmission; a top-of-the-line Abarth (with a slight power bump, the rowdier exhaust system, limited slip differential, upgraded brakes and a firmer-riding suspension) stickers for $29,390.

A Scorpion Sting stripe/decal package is available for the Abarth version of the Spider.

Abarth exhaust can drown out the sound of a straight-piped Harley.

Abarth exhaust can drown out the sound of a straight-piped Harley.

Fiat may soon sleep with the fishes. 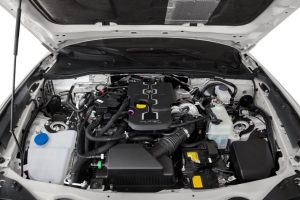 A car’s engine is its beating heart – the thing that defines it.

Both do the same job – differently. The Mazda needs to be revved higher while the Fiat doesn’t because of its lower power peak (and higher peak torque, courtesy of the turbo).

If you work the Miata, it gets to 60 a little sooner – in about 5.8 seconds vs. 6.3 for the Italian job. But the Spider gets there without as much apparent work, which is either a pro or a con depending on how you like your acceleration served.

The Fiat’s engine, incidentally, is the same engine used to power the Fiat 500 Abarth but this time driving the rear rather than the front wheels. The Mazda, likewise, is the only rear-drive car Mazda sells.

Both engines are paired with a standard six-speed manual transmission, with the option to choose a six-speed automatic.

But they are geared differently. 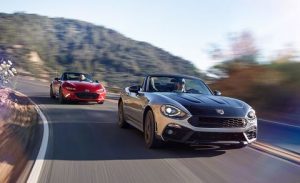 The automatic-equipped versions of both get the same 3.58 rear gears.

One thing – a good thing – that both have in common is that neither engine is direct-injected. The Fiata and Miata are two of very few 2020 model cars that haven’t gone over to DI – which they can “get away” with because both are very fuel-efficient without having to resort to DI. It is also why the Mazda’s engine is among the most bulletproof and lowest-maintenance new car engines on the road.

No carbon fouling worries (due to the DI) especially if you spin up the engine to 7,500 often and perform an Italian tuneup.

The Spider’s engine should be similarly carbon-immune.

If you like a more easygoing sports car, you may prefer the Italian take on things.

The Fiat’s torque-rich (and lower RPM) turbocharged engine and lower gearing allows shorter shifting and less revving. You can even skip-shift from second to fourth without lugging it.

The boosted engine also works better with the optional automatic than the Mazda’s not-turbocharged (and not-as-much-torque) engine. It does a better burnout, too. 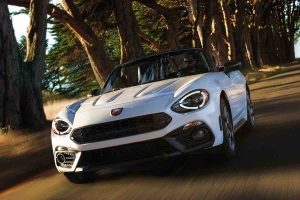 Both, however, are practical as commuter cars. Re-read the mileage you’ll get from either. It’s only about 3 MPGs off the pace of economy cars that aren’t nearly as fun to drive.

Especially in the bends – where the equally precise steering and tail-out oversteer if you really get into it will put a grin on your face faster than getting paid in cash under the table for a job and knowing you get to keep it all for once.

There’s nothing that can touch either car in this respect  . . . without touching your wallet more firmly. The Soobie BRZ/Toyota 86 (a hardtop-only) ride firmer and don’t corner better. Those two have much worse visibility, too.

And they have the same engines. 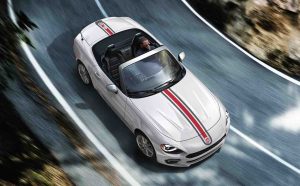 A BMW Z4 will give you a similar experience – for twice the price. I’m telling you – both of these cars are equally too-good-to-be true.

Probably the most noticeable difference between them is how they sound. Especially the Spider Abarth vs. every version of the Miata – which doesn’t offer a factory straight-pipe option. Well, that’s what the Abarth’s “Record Monza” pipes sound like. When you turn this thing over, your neighbors will think you bought a Hog – which for the record comes with a much larger (1800 cc – or 1.8 liter) engine with just two tailpipes.

The Abarth has four. 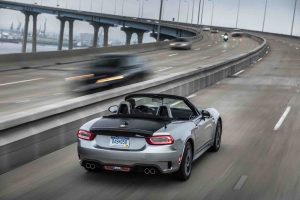 A concussion of combustion erupts at start-up and only gets better as you go faster. And it’s legal. Built that way. There’s nothing Officer Unfriendly can do about it except hassle you a little. He might even give you a ticket out of sheer vengefulness – but it’ll get tossed in court because the system is stock and DOT approved.

How Fiat – bless them – got this thing past the fun censors is hard to grok. But be grateful they did. 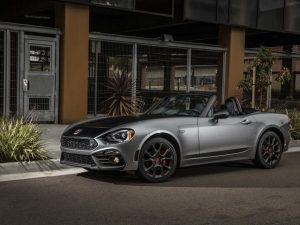 Though clearly related to the Miata, the Spider is just as clearly not a Miata.

The Fiat’s longer overall – by about five inches – and strikes a more relaxed pose than the tightly coiled, cat-slit-eyes Miata. The shorter overhangs give you a bit more wiggle room when it’s time to park, too.

Inside, they’re nearly the same – and this is good.

Both are the essence of elementalism. Big, centrally mounted tachometer – no-nonsense analog. Speedo off to the right; the essential peripheral info in smaller gauges off to the left. Three large rotary knobs you can grab by hand, mid-corner – without looking (or pinching and swiping). Grabs rails on either side of the center console. And a pull-it-up manual emergency brake lever. This being as necessary to the sporting driver’s happiness as a sweet-wounding exhaust and shift-action that feels better than the custom hair-trigger of a $2,000 Kimber 1911. 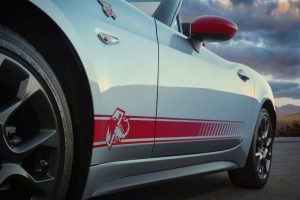 This is a car that doesn’t need apps to keep you entertained.

But the Fiat draws envious looks because it looks like  . . . an Italian job.

Though the Spider and Miata are two-seaters, there is a surprising amount of room for the two lucky occupants. Each has the same 43.1 inches of legroom and enough headroom to clear the heads of people as tall as 6ft 3 without having to lower the top. 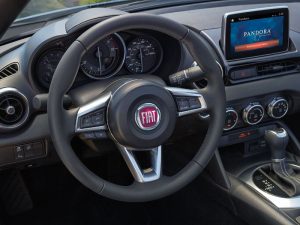 The absence of useless back seats (as in the BRZ/86) is no loss – except insofar as having a place to toss your gym bag. And the BRZ/86 are not available without  a roof. Or at least, one you can lower.

This is probably a function of Fiat’s troubles. 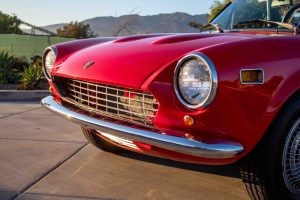 While Mazda  has a lineup of cars that sell better than the Miata – including the Mazda3 and Mazda6 sedans as well as the popular CX3, CX5 and CX9 crossovers – Fiat just cancelled the 500 micro-car and the future doesn’t look bright for the 500L and 500x.

That leaves the Spider, which has appeal. But how to get Americans into a Fiat store?

Well, offer them a better deal.

This may be the only instance of the better value being the more exclusive. The catch, however, is that if Fiat folds its tent, the Spider will be orphaned – like the Pontiac Solstice, if you remember that one.

But – like the Solstice – the disappearance of the brand – and the dealerships – doesn’t mean the disappearance of parts or service. Fiat is part of the FiatChrysler (and soon, Peugot) conglomerate, just as Pontiac (RIP) was part of GM. And so long as the parent company remains on its feet, you will not have trouble getting necessary service parts – or service.

And the disappearance of Fiat would increase the cachet of the Spider vs. the everyone-has-one (and everyone can still buy one) Miata.

The 124 is much more than the same thing wrapped differently. But it’s also very much alike where it counts.