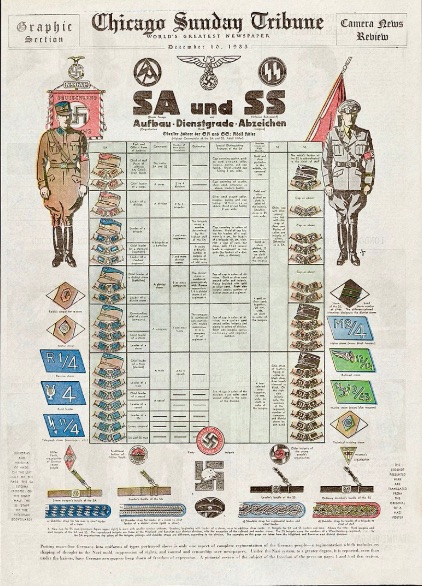 Armed government workers like to award themselves military ranks, something the German Sturmabteilung – the SA, more commonly known as storm troopers – also liked to do. An unemployed chicken farmer became the equivalent – in terms of his patches – of a five-star general in the real army.

Here we have an Obersturmfuhrer – a “lieutenant” – in the West Virginia SA who got caught kid-touching… serial sex-abuse of a child. The “lieutenant” is James Cain, 48 – who according to local news coverage – see here – began abusing his victim when she was  nine and continued to abuse her until she was 13.

Why he – and the rest of his ilk – aren’t also facing charges of stolen valor – of impersonating NCOs and commissioned officers of the military is an interesting question to ask. Also interesting is why so many “conservatives” – who practically worship the military and generally get very upset whenever those who wear the uniform aren’t treated with what they consider to be the proper respect aren’t at least irritated by meatheads who never “served” – much less were commissioned – wearing ersatz military uniforms adorned with fake badges of rank they apparently pulled out of a box of Cracker Jacks.

It’s also a dangerous thing, in addition to a fraudulent thing.

Meatheads who award themselves military “ranks” get confused. It causes them to consider themselves to actually be “sergeants,” “lieutenants, “captains” and “colonels.” This is fantasy, like a group of boys playing army out in the field – except the boys play army with fake guns and no power to give orders to anyone not playing the game.

An adult – and armed – meathead who clips “lieutenant” bars to his collars is someone who expects to be obeyed – and comes to believe his “rank” gives him the rightful power to bark orders.

It also inclines him to think as a real soldier would, in terms of Us – and Them.

Them being us – the non-ranked “civilians” – as they call us – whom they expect to do as told. And when they do not show proper respect for authority... well, we see it every day.