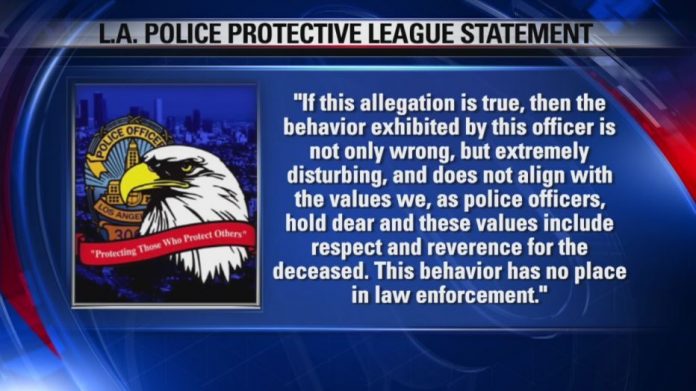 The (late) great comedian Sam Kinison had a routine about morgue rape. It began with the corpse on the slab thinking to itself: “At last! Peace. No worries. Just relax… ” Then it feels itself being rolled over  . . . and then it feels something else.

That was comedy. Here’s actuality:

A veteran Los Angeles armed government worker  is under investigation after his body-worn camera captured him fondling a dead woman’s breasts.

The AGW, who is assigned to downtown’s Central Division, was placed on leave once supervisors reviewed the footage during a random inspection, LAPD officials said.

The incident occurred when the AGW and his partner responded to a call about a possible dead woman in a residential unit, sources said. Once the two AGWs determined the woman was dead, one officer returned to the patrol car to retrieve something. During that time, the accused officer turned off his body-worn camera and fondled the dead woman’s breasts, LAPD officials said.

Although the AGW deactivated the camera, a two-minute buffer on the device captured the incident. The department is also investigating the AGW’s work history.

“We immediately launched an administrative investigation once we learned about the incident,” chief spokesman Josh Rubenstein said, “and we assigned the AGW to home.”

“If this allegation is true, then the behavior exhibited by this AGW is not only wrong, but extremely disturbing, and does not align with the values we, as AGWs, hold dear, and these values include respect and reverence for the deceased,” the board of directors of The Los Angeles Police Protective League said in a statement. “This behavior has no place in law enforcement.”