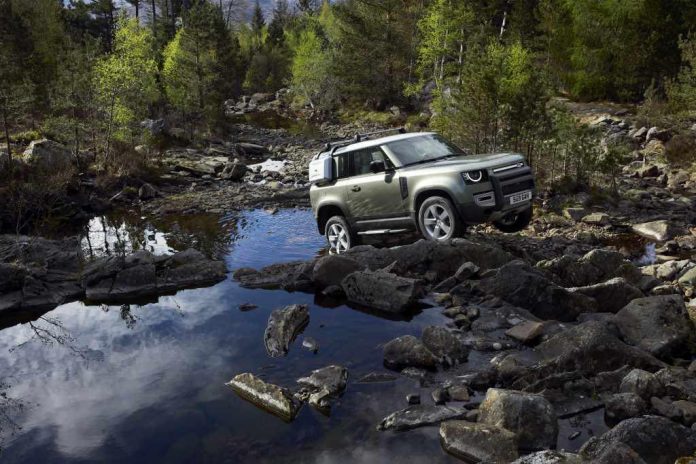 The old Land Rover Defender – last sold new (here) back in the 1990s – was a primal SUV; the thing didn’t even have carpet. A hose-it-out-interior. An aluminum body.

An ancient – and underpowered – V8.

But it did have was cachet. There was something special about driving what you saw the TV safari show guys driving. 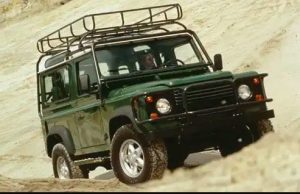 It could go through – and over – practically anything.

You had to go back to the ‘70s to find a similarly primal 4×4 – something like an old Ford Bronco, International Scout or Jeep CJ.

Which were merely cool.

Now the Defender’s back – this time, with carpet. 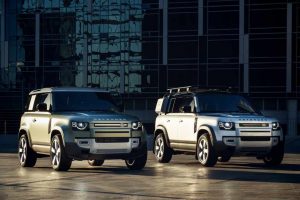 The Defender is a legend. The star of safari shows and off-road endurance races. The original came with nothing that wasn’t essential to being unstoppable.

But it came with very little else.

Not even carpet. Or, power.

Plus, you get carpet… no extra charge. 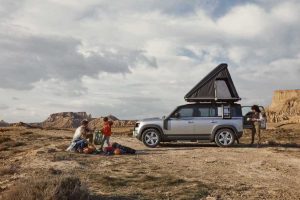 Both come with full-time four-wheel-drive, a two-speed transfer case and almost nine inches of ground clearance – just like the original. They also come standard with a 10-inch touchscreen, a stereo with AppleCarPlay/Android Auto and carpet.

Very much unlike the original.

Plus something else that’s pretty remarkable these days. A lower price than the original. 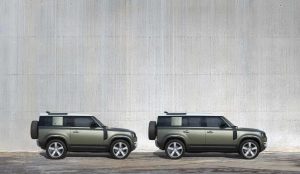 A top-of-the-line 110X four-door with a six cylnder/hybrid powertrain, panorama sunroof and heaters for the front and rear seats stickers for $80,900.

Prices for the two-door Defender 90 – which will be available this summer – should roughly parallel those of the 110.

The Defender returns to the U.S. after an absence of almost 25 years.

Just as capable as the original.

Much more livable than the original.

Costs less than the original.

What’s Not so Good 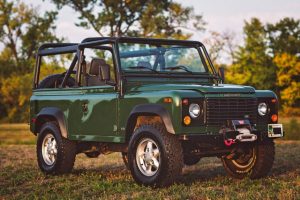 Less primal than the original.

Turbocharged engine under more pressure than the original.

The original Land Rover had the cachet of an aluminum V8 – a rare thing back in the ‘90s. But it was an ancient – and weak – V8.

It was an ancient GM V8, actually. 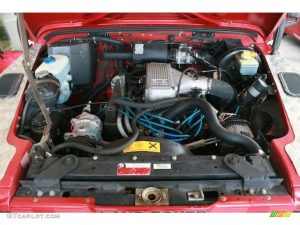 Land Rover bought the rights to the small (3.9 liter) V8 that GM designed back in the early 1960s – and used it in the ‘90s-era Defender. It made all of 182 horsepower – sad for a V8 and desperately inadequate in a 4,000-plus pound 4×4 SUV. The last Defender was slower than a current Prius – and five times as thirsty.

You were lucky if you got 13 MPG – on the highway.

The new Defender comes standard with an engine half the size of the original’s – a 2.0 liter turbo’d four – that makes 296 horsepower. This is more than adequate to move the new Defender, which can get to 60 in 7.7 seconds.

An optionally available 3.0 six/turbo-hybrid drivetrain ups the underhood ante to 395 horsepower and gets the 5,000-pound Defender to 60 in half the time it took the old Defender – and uses half the fuel. 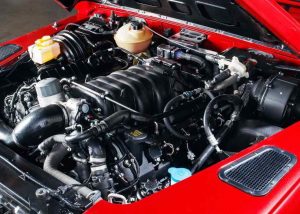 Both engines are teamed up with eight-speed automatic transmissions and a full-time 4WD system which Land Rover calls all-wheel-drive. Which it technically is, since all four wheels are driven. But it’s confusing – as well as under-selling what Land Rover is offering here.

Historically, AWD meant a light-duty system of the sort one finds in cars – without a two-speed transfer case and Low range gearing. These systems were designed primarily to impart a traction advantage on paved roads.

4WD was meant for that – plus off-roading. The two-speed transfer case and 4WD Low gave the vehicle so equipped the leverage advantage to get through deep mud, unplowed snow and over uneven/rough terrain. 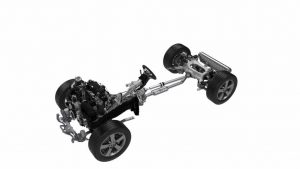 But it wasn’t just that. 4WD systems were generally made of heavy, tough components designed to not break over rough/uneven terrain. the typical AWD system wasn’t designed for that and would probably break if you subjected it to that.

But the leverage advantage is the same.

The old Defender was great for camping and off-roading . . .  and terrible everywhere else. It was slow, thirsty, drafty and tipsy. Driving one on road took more skill – and thought – than driving the new one off-road. 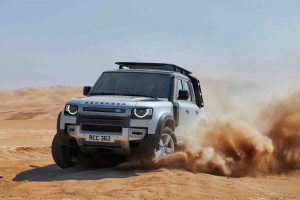 If you weren’t careful it was easy to get into trouble. In part because the old Defender barely had power enough to get out of its own way. I remember driving a brand-new one back in ’97, in DC-area traffic. Merging was harrowing; floor the gas and silently pray that one of the cars closing fast in your rearview would sidle over to the left and give you time to build speed.

The V8 screamed but you didn’t move.

Only the gas needle did. 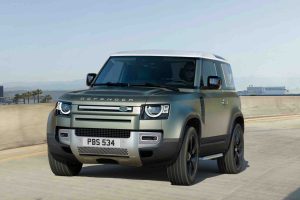 The new Defender is no less capable off-road  but much more  comfortable on road – because it isn’t tipsy, drafty – or wheezy. It corners almost oddly well given it sits so high off the ground. This is the biggest single improvement since the ’90s when it comes to real-deal SUVs.

Twenty-five years ago, serious 4x4s were … primal. You drove them with respect for their on-road limitations. This driving at least 10 MPH below the posted speed limit in the curves and keeping both hands on the wheel at all time – just in case a gust of wind hit you from the side and knocked you into the next lane. Everything you did, you did carefully and gradually – so as not to upset the delicate equilibrium. Only a fool or a maniac drove one faster than 70  – which may be why they did their best to convey the unwisdom of going faster than 70 with abundant wind and tire noise, weird handling feel and a general sense of imminent doom if you didn’t chill out and cut your speed. 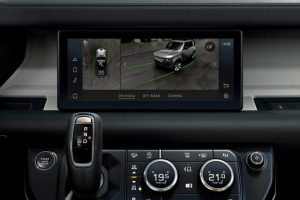 The new Defender is any easy driver. It is also thoughtfully laid out for the driver. The gear selector is mounted up high on a shelf – not on a console below -where you can reach it readily and never have to worry about spilling your coffee all over it. There are rotary knobs adjacent to this for the HVAC (heat and AC) adjustment.

Notice that the steering wheel’s spokes are positioned so you don’t break your thumbs while rock-crawling and column is positioned in such as way as to prevent your knees from interfering with incremental inputs, as when shimmying up a very narrow trail with trees inches away on either side.

The center console has built-in-grab handles for the driver and passenger – with a huge cubby in between for whatever you need to stow but want to be able to get at quickly. 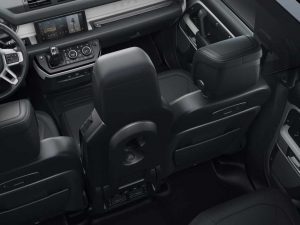 The first row center console can also be configured as a jump seat – for three-across adventuring.

One thing that’s very different – from the original – is the large pinch/swipe touchscreen, which displays approach/departure angles, inclination/declination and even provides remote camera views of wheel angle – also helpful off-road.

One thing that’s identical to the original is that you can see where you’re going – and what’s around you – without relying on a closed-circuit camera system The breadbox dash is low relative to the seats and the windshield is huge – an almost vertical expanse of glass that extends upward so much it almost qualifies as a sunroof. The side glass is equally tall, giving you probably 25 percent more view than in most new cars. 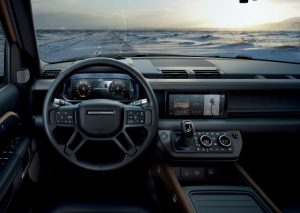 The verticalness continues all the way around to the rear (and side-opening) liftgate, which does not slope or pinch  . . . so you can see what’s behind you without a camera.

One of the neat things about the new Defender is the availability of body styles – two door or four-door – as well as seating configurations. The 110 is available with a third row – expanding its seating capacity to seven.

In theory, at least.

Legroom in the Defender 110’s third row is just a bit more than 20 inches – about four inches less than in the backseat of a Camaro. But you can make more room by sliding the second row forward a bit – and even if you don’t, the third row gives people in the second row a place to put their stuff.

The Defender also comes with a full-size spare tire.

Most new vehicles – including many SUVs – come with a mini-spare that’s designed to let you limp to the closest tire store. The Defender’s spare is the same as the other four – so you can keep on going, wherever you were headed.

Land Rover says the Defender’s interior materials are specially made to retain the “new” look longer – and this protective theme carries to the exterior, too. In anticipation of the rigors of off-roading, the Defender’s paint receives a satin protective film designed to keep the shine shining – and rocks from chipping. 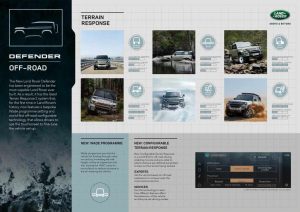 Two-tone paint schemes and matte-finish body cladding can be specified. Four “Packs” are available, too – Explorer, Adventure, Country and Urban. Each configures the Defender accordingly.

Explorer Defenders get a high-mounted air intake – to prevent sucking water into the engine and hydro-locking the engine; roof racks and side-saddle gear containers, mud flaps, modified front skid plates and trim. It’s the one for the Crocodile Dundee in you.

The Adventure Pack gets you a carry-it-with-you pressurized wash system with 6.5 liter reservoir, air compressor, side-saddle accessory storage and a back seat that converts into a backpack.

If you get the Country Pack, you get the portable rinse system, configurable interior loadspace partition and mud flaps.

The Urban gets bright trim, deployable tubular running boards and the option to outfit the Defender with 22 inch wheels – if you gnoe what I’m sayin’.

You can even get a roof-mounted tent – with a ladder to get up there. Why up there? Because lions might be down there.

Good on you, mate! 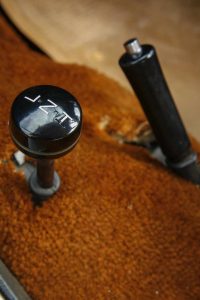 At least not here.

But, its not a huge loss – in terms of the torque. The modern turbo-charged gas engine produces near-diesel torque (295 ft.-lbs. in this case) and at diesel-like engine speed (just 1,500 RPM)The gas-hybrid V6 produces herculean torque – 406 ft.-lbs. (at 2,000 RPM) and neither need a particulate trap or DEF.

One thing you’ll soon be able to get is a pick-up version of the Defender – something that hasn’t been available ever.

Jeep offers something similar – the Gladiator – but while a Jeep is one Hell of an offroader, it isn’t a Land Rover.

A last word about then vs. now.

The old Defender was primal because it was mostly mechanical. Almost anything that ailed it could be dealt with in the field – literally – using basic hand tools. This was good but also bad because the original was notorious for being in need of frequent fixing. 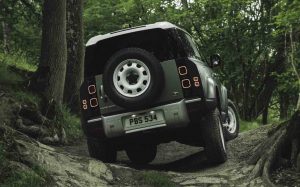 The new Defender is not simple because it is very electronic. Which is bad, because if something ails it, you’ll likely need a dealer.

On the upside, it’s probably less likely to need fixing… because it’s not 1997 anymore.

Rock-crawling cachet – with carpet, this time.