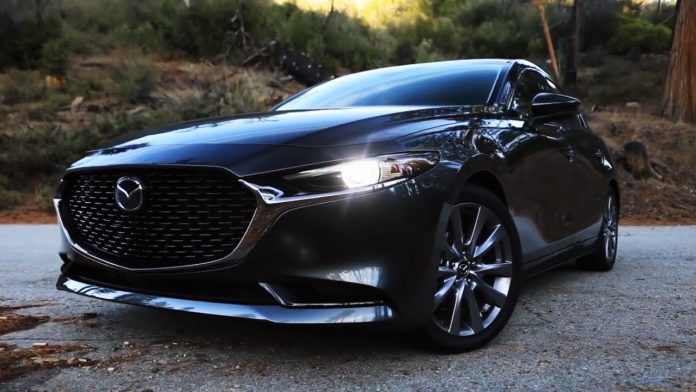 All-wheel-drive is a feature many people want – which accounts for the popularity of crossovers, which almost always offer it and sometimes even come standard with it.

But for some reason, it’s hard to find an entry-level compact sedan or hatchback that offers it.

Mazda now offers the extra grip – and better handling – of all-wheel-drive with the new Mazda3, which gives it a leg up over rivals like the Toyota Corolla, Honda Civic and Kia Forte – which don’t offer it at all.

And over the Subaru Impreza, which does offer it – and for less – but with a lot less power.

On the downside, there are some things the Mazda doesn’t offer – like  an optional engine or the option to choose a manual transmission, if you choose the sedan – options which several of its FWD-only rivals (and the AWD standard Impreza) do offer. 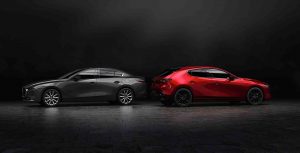 As always, you pays your money and you takes your choices.

The 3 is Mazda’s entry-level compact-sized sedan/hatchback sedan; it’s in the same class as rivals like the Toyota Corolla, Kia Forte and Honda Civic.

It differs from all of the above in being one of just two models in this price range that’s available with all-wheel-drive.

The other one being the Subaru Impreza – which comes with it standard.

However, there is no longer a manual transmission option – unless you buy the more expensive hatchback – and then you can’t opt for AWD.

Prices start at $21,500 for the base trim sedan with front-wheel-drive and a 2.5 liter four cylinder engine paired with a six-speed automatic transmission. 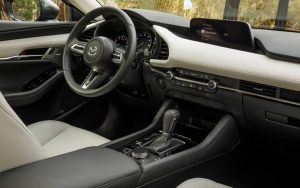 A top of the line Premium trim sedan with all-wheel-drive (and the same automatic) stickers for $27,900.

The 3 gets AWD as an option – and (unfortunately) a suite of standard “safety” features,  including lane keep assist and a drowsy driver monitor.

It’s one of just two cars in the class that offers AWD.

Powerful standard engine – without a turbocharger. 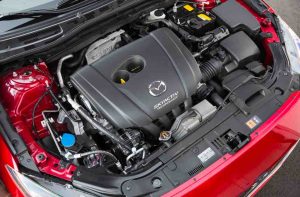 Regardless of trim or bodystyle, every 3 comes standard with the same engine – which was last year’s optional engine. It’s a 2.5 liter engine that  makes 186 horsepower and 186 ft.-lbs.  of torque.

Without a turbo. And so, without any worry about ever having to replace one down the road, after the warranty expires.

The Honda Civic’s optional 1.5 liter engine – with a turbo (and a higher price) only makes 174 horsepower. The Toyota Corolla sedan’s standard 1.8 liter engine hasn’t got a turbo – but only gives you 139 horsepower. If you upgrade – and pay extra – you can get a new Corolla with a larger 2.0 liter engine – also sans turbo – and sans horsepower (169 hp) vs. the Mazda’s standard engine. 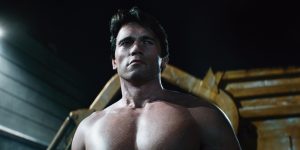 This is an example of the old saying that there’s no replacement for displacement. And it’s not just an old saying. It’s an engineering truth. Smaller engines make less power unless they flow more air – which can be accomplished via force-feeding them air. By bolting on a turbo. This is a round-about way of getting equivalent power out of them vs. a larger engine without the turbo.

But why not just go with the larger engine – and skip the turbo – as Mazda has?

Because the government keeps demanding that new cars deliver higher gas mileage, which can be done by making the engines smaller. But then customers get an underpowered engine.

Which buys a lot of gas – to make up for it.

But, there’s no optional engine in the 3 – either way – which makes the 3 more expensive than the Subaru Impreza, which you can pick up for just $18,695 to start – with AWD standard. But the Soobie doesn’t offer an optional engine – and comes standard with much less power.

The hatchback version of the 3 also comes standard with the same 2.5 liter engine – and the option to go manual, if you prefer. However, the six-speed manual is optional – it adds to the car’s price – and you can’t pair it with AWD, which is only available with the six-speed automatic.

If you buy the sedan version of the 3, you get a six-speed automatic transmission (with paddle shifters in Premium trims) and your choice of FWD or AWD. 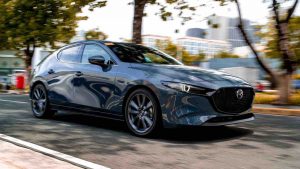 The 3 may not offer an optional engine but its standard engine is the strongest in the class, as noted above. And especially relative to its only AWD-equipped rival, the Subaru Impreza – which offers nothing larger than a  2.0 liter engine that manages just 152 horsepower.

Subaru does offer the Impreza with a five-speed manual transmission, but the automatic-only Mazda is much quicker, posting a 0-60 time of about 8 seconds flat vs. about 11 seconds for the Impreza.

With the manual six-speed, the 3 hatchback is even quicker, getting to 60 in about 7 seconds flat. 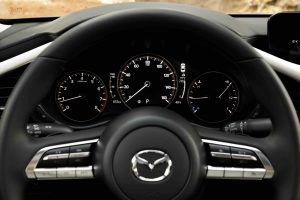 Interestingly, the Mazda also has more ground clearance than the Soobie – 5.5 inches vs. 5.1. It’s not a huge difference, obviously. But it does mean that when the flakes fall, it’s the Mazda that might be the better tool.

And when it’s dry – it’s no contest. The Mazda isn’t just a little quicker; it’s so much quicker you ‘ll need to pull over, park and wait for the Subaru to catch up coming out of every curve.

There is also something to be said for not having AWD – and having power, without having to pay extra for it, as is the case with Corolla and Civic.

And it’s very nice to not have a CVT automatic. 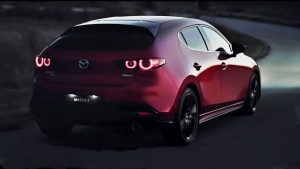 CVTs today are much better, overall, than they were a few years ago – but many people do not like their operating characteristics. CVTs are, fundamentally, economy transmissions designed to maximize a car’s fuel efficiency by optimizing leverage. The idea is to maintain the idea mechanical ratio between engine, transmission and driver wheels at all times – by eliminating fixed forward gears in favor of one continuously adjusting ratio.

But eliminating shifts results in rubber-bandy acceleration feel and – often – more driveline noise. CVTs also seem to be not-as-tough (or as durable) as conventional automatics. In any event, if you don’t want one, avoiding one isn’t easy.

Unless you shop Mazda. 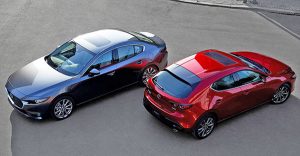 Both the sedan and the hatch have interiors – as well as  standard features – that would have qualified them both as entry-luxury cars as recently as five years ago. These include the iPad-like 8.8 inch LCD touchscreen in the center stack as well as the standard adaptive cruise control and the available Heads-Up Display (HUD), which projects information such as your current speed in a holographic display in your line of sight, so you don’t have to take your eyes off the road to know how fast you’re going.

Another luxury-level amenity the 3 offers is an exceptionally high-fidelity 12 speaker Bose ultra-premium surround-sound audio system. It is the kind of audio system that you used to have to buy a luxury-badged (and luxury priced) car to get. 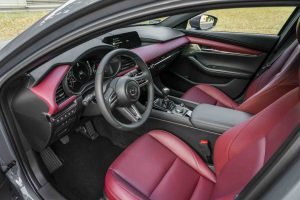 And the standard audio system comes with eight speakers.

Both versions of the 3 are good-looking versions, too. Neither looks entry level, at any rate. Mazda is one of the few companies that still views cars as more than transportation appliances.

As far as utility:

The hatch has about twice the cargo space as the sedan – which has a 13.2 cubic foot trunk – but less rearward visibility due to the slope of the rear glass; the sedan also has better visibility on either side because it doesn’t have the large “C” pillars that the hatch has. 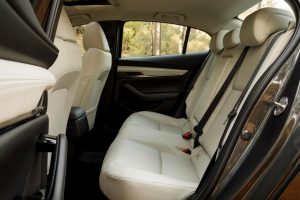 Like others in this class, there is a big difference in front vs. rear seat legroom. The driver and front seat passenger enjoy 42.3 inches of legroom – comparable to a full-size luxury car. But those in back get just 35.1 inches – unless those up front slide their seats forward a few inches.

This is still par for the class, however.

And style isn’t optional in most of the 3’s rivals.

One thing – several things – the new 3 comes standard with that you may wish it didn’t come standard with is a suite of  saaaaaaaaaafety and driver “assistance” tech, including Lane Keep Assist, Automated Emergency Braking and a “drowsy driver” warning system. 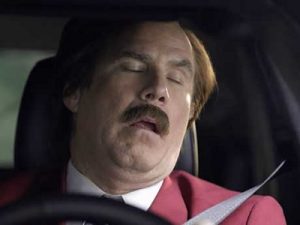 It’s odd that Mazda would include these things – as opposed to offering them – as Mazda is a company that appeals to drivers – not cell phone tappers. Or mindless traffic law obeyers. One of the many annoying things about Lane Keep Assist is that it tries to keep you in your lane when you’re trying to leave it, as when threading the needle through traffic. The system will exert countersteering force if you don’t signal before every lane change – even when you’re the only car on the road.

Similarly, the automated emergency braking system will brake when there isn’t an emergency – just another car ahead that gets within the “too close” orbit of the system’s sensors. But “too close” is programmed in accordance with your glaucomic grandma’s ideas of such things. 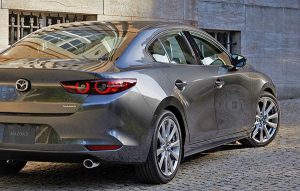 Luckily, these things can be turned off. But you shouldn’t have to buy them in the first place.

If you need AWD – and don’t want to buy a crossover – or do without power – now you don’t have to!