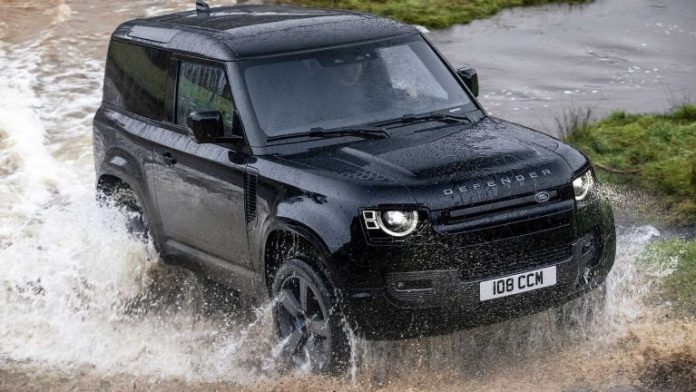 It is said – fairly – that as good as new cars are in terms of just working, usually for almost forever and without their owner needing to do more than just add gas and drive – there is definitely something missing that was once common.

That thing being personality.

So it’s a good thing there are still a few new vehicles that make up for the rest of them in this respect. 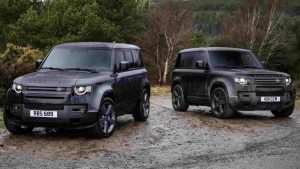 The Defender is Land Rover’s iconic – and formerly primitive – two and four-door off-roader. Everyone knows the classic models, having seen them on safari shows. These had metal floors, take-’em-off-doors and go-anywhere capability.

The new Defender is also available in two door and four-door versions – as well as a new long wheelbase version – but it’s far from primitive. It is also available with a supercharged V8 that is about three times as powerful as the primitive V8 the old Defender used to come with. 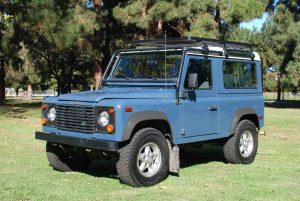 Prices start at $53,175 for the 110 four-door model in entry-level “P300” trim. It comes standard with a 2.0 liter turbocharged four cylinder engine, an eight speed automatic transmission and a full-time 4WD system with a two-speed transfer case

Interestingly, the two-door starts out a little higher – at $53,775. It comes with the same drivetrain but also gets “S” upgrades that include leather trim, a digital main gauge cluster and a 10 speaker Meridian audio system.

P400 versions of the two and four-door come standard with a more powerful  3.0 liter six/mild hybrid combo and the same full-time 4WD system. Prices for this version start at $65,475 for the two-door P400 SE and $68,375 for the same thing with four doors. This time, you pay more for the additional doors, in other words. 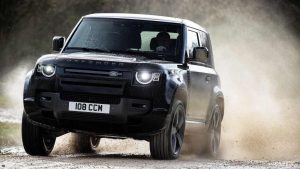 But the one with the most personality – and horsepower – is the Carpathia Edition, which comes standard with a supercharged 5.0 liter V8, special matte gray paint, a beverage chiller built into the center console, heated windshield, 22 inch wheels and an automated trailer-reversing system, among the upgrades.

Cross-shops include the new Ford Bronco – in terms of general layout and capability – and the Mercedes G-Class (the Gelandewagen) in terms of exclusivity. 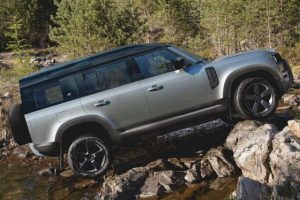 Put another way, it means you now pay less for four doors – or more for two!

Also new is a third Defender – the long-wheelbase 130 – which comes standard with three rows of seats (a third row – with seating for two rather than three is optional with the 110). 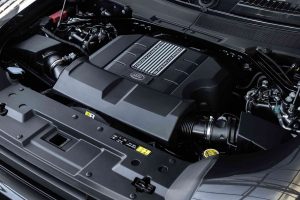 There are three Defender engines available to choose from – one of the many things that makes the Defender unusual these days given that more and more vehicles of all kinds (even trucks) increasingly come with just one engine and maybe offer a single optional one.

The standard Defender engine is a 2.0 liter turbocharged four cylinder engine that makes 296 horsepower – which is substantially more power than the 3.9 liter V8 that was standard in the classic Defender of the ’90s. That one made 182 horsepower. It was also a primitive V8, dating back to the ’60s – when Land Rover bought the rights to the design from General motors. 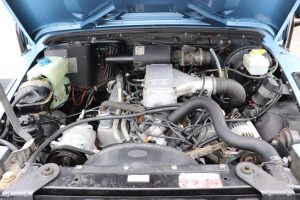 In addition to producing another 100-plus horsepower than the classic Defender’s ancient V8, the current Defender’s standard four also uses a lot less gas. Equipped with this engine, the Defender carries and EPA rating of 18 city, 21 highway.

As opposed to 12 city and 15 highway for the old V8-powered Defender.

If you’d like even more power – without burning more gas – the Defender can be equipped with a 3.0 liter six/mild hybrid set-up that develops 395 horsepower and still rates essentially the same mileage – 17 city, 22 highway – as the four. 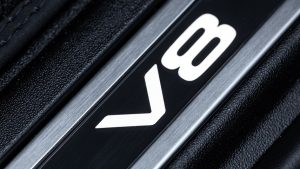 If you’d like to use more gas – but still not as much as the classic Defender’s 3.9 liter V8 – the Carpathia Edition offers that option.

The 5.0 liter supercharged V8 that comes standard in this trim is actually very fuel efficient – in that it makes 518 horsepower out of the gas it burns, as opposed to less power than a modern four cylinder engine – as in the case of the classic Defender’s 3.9 V8.

The Defender’s modern V8 whines – wonderfully – which you’ll be able to hear more of if you remove the acoustic cover Land Rover places on top of it. Then you’ll be able to enjoy the sound of the blower doing its thing. And you’ll also be able to see it, when you raise the hood.

Covered or not, you will definitely feel it. 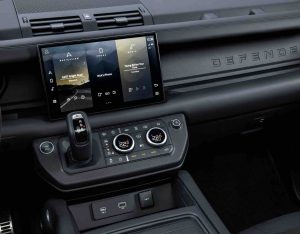 How long did the classic Defender with its 3.9 liter V8 take to get to 60?

Put another way, the Carpathia could lunge to 60 twice in the time it took for the classic Defender to do it once.

That’s what you call progress – for once.

Every Defender, regardless of engine, comes standard with a full-time 4WD system, which means the vehicle is always in 4WD High. Many 4WD vehicles are part-time 4WD, meaning the usual default is actually 2WD (rear-drive) until the driver selects 4WD High. These systems also usually split the power delivery 50-50 front to rear when 4WD High is engaged. The Defender’s splits the power according to need, as defined by the available traction. Most of the time, most of the power goes to the rear wheels. When these begin to lose traction, power is automatically routed to the front axle.

In this way, the system is similar to the all-wheel-drive systems used commonly in car-based crossovers. But these usually send most of the power to the front (rather than the rear) wheels – and they don’t have the two-speed transfer case that most 4WD systems have that lets the driver “gear down” to Low for additional mechanical leverage to ford through heavy snow, mud and so on. 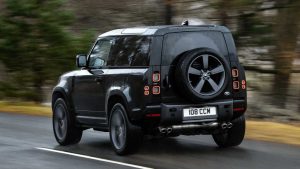 If you’ve driven a classic Defender you will remember that in addition to being lethargic it was also tipsy – as was true of all the first-generation SUVs, which weren’t called that when they were new, thirty-plus years ago. They were just “4x4s” back then – and people who bought them drove them with respect for their limitations, which were a side effect of their capabilities. They rode high off the ground, the clearance giving them the capability to ford deep water and pick their way up (and down) heavily rutted, unpaved roads. It also raised their center of gravity, which made them more likely to roll – as in over – on paved roads, if you took curves at speed or made abrupt steering inputs.

This tendency was exacerbated by usually crude suspension systems – including in some cases leaf-springs, solid axles and so on – sometimes tucked under a short-wheelbase, enhancing the tipsy tendencies. 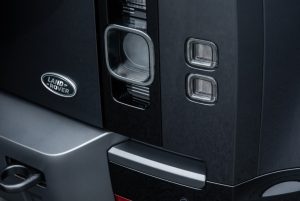 Luckily, most of those first-generation SUVs – as they weren’t known back then – were Prius-slow and so it took real determination (plus time) to get in trouble with them.

The Carpathia is quicker than the Ferraris of the not-so-distant past. Fast, too – with a top speed electronically limited to 149 MPH. It is also as capable as the Defenders of the past. But it isn’t tipsy, thank God for that. Thanks to a suspension that isn’t just made of leafs. This rig has an electrically-controlled rear axle with yaw control, torque-vectoring that routes power to the wheels with grip, side to side as well as front to back and a Terrain Management system that modulates the damping according to the surface. 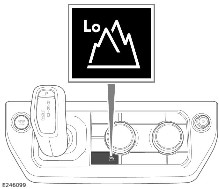 While not a Ferrari, it can take curves as comfortably as any modern car at well above whatever the posted speed limit is.

Now you have to really try to get into trouble.

Meanwhile, the Defender will get you out of it – if you get caught in a snowstorm, for instance. Or through it – as in the case of the road ahead being washed out. Or away from it, as in the case of something bearing down on you from behind. When you push down on the accelerator of this Defender, it accelerates. 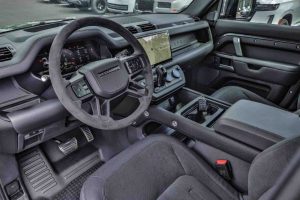 Here we have something that doesn’t look like everything else – especially the Carpathia Edition, in charcoal gray matte and black livery. The two door is especially unique-looking and also has the everyday advantage, parking-and-maneuvering-wise, of being only 180.4 inches long overall (vs. 197.6 for the four door). You can, by the way reduce the length of both of these rigs by about ten inches – by removing the tailgate-mounted full-size spare tire.

That gate swings open to the side rather than up – which further separates this rig from the usual. 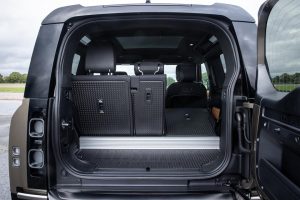 Though there is almost 9 inches of clearance between the undersides of the Defender and the road below, it is not a climb to get in – as it is in many new 4×4 trucks. The cargo area is also easier to access for that reason, too. There isn’t much room, though – if we’re talking ’bout the two-door 90 Defender – which only has 10.5 cubic feet of capacity. The three-door 110 ups that to 11.6 behind it available third tow (which seats two) and gives you the option to ditch the third row in favor of 34 cubic feet of cargo room behind its second row (which seats three across).

The two-door’s rear side windows are also fixed-in-place and do not roll down (or crack open). But rear-seaters do get an upward view, via a pair of also-fixed-in-place glass roof panels. 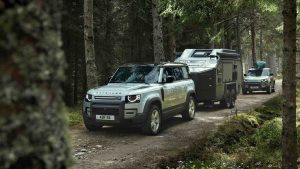 Though modern, this thing is still serious. You can tell by the way the steering wheel is canted – in such a way as to facilitate off-roading. There’s no lever for Low, though. Instead, a button on the center stack, to the right of the pistol grip gear-selector. Some (like me) miss the manual engagement of a lever for 4WD Low – both for tactile and other reasons. Mechanical levers tend to be more durable and if something goes awry, it is usually easier to fix a mechanical thing – especially if you’re 150 miles away from diagnostic tools – than it is to triage electronic things. But this is how all modern 4x4s are now. 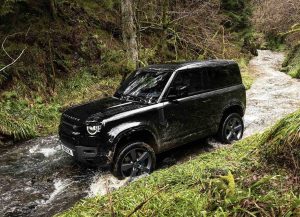 And you can still wade through 35-plus inches of water with this rig, which also boasts a 37.5 degree angle of approach.

A third Defender – the 130 – is arriving at Land Rover stores for the ’23 model year. This one has a third row with room for three – and so seats up to eight (vs. seven in the 110, when optioned with its available two-seat third row).

Whether tow or four doors, the Defender hasn’t got much direct competition. The Benz G-wagen is similarly exotic – and comes standard with a mighty V8. But it’s four doors-only and – with a base price of more than $135,000 it makes the Carpathia’s price seem like a steal. 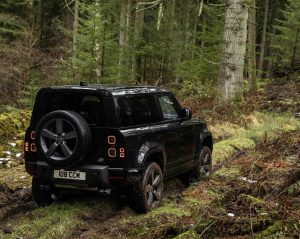 There is also the Ford Bronco – which is as or even more formidable as an off-roader and is available in two and four door versions, too. It is also much less expensive – even in top-of-the line Raptor trim (a mere $68,500).

However, that one is four doors-only and no Bronco is available with a V8.

However, the entry-level Bronco is worth cross-shopping, if you’re interested in something very similar in layout and capabilities – if not exclusivity.

The Defender doesn’t just get you there – and back. It makes you want to keep going there.