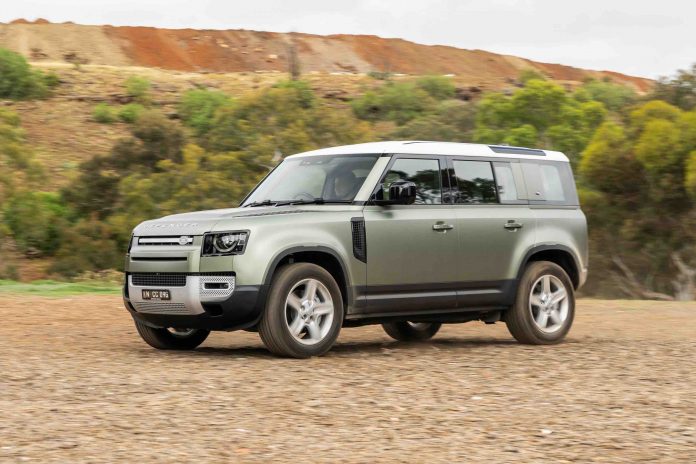 The iconic Land Rover Defender – the one most people know from safari shows – had an aluminum body, didn’t have carpets – or air bags – but did have a 182 horsepower V8 under its hood that averaged about 13 miles-per-gallon.

It was last available new (in the United States) back in ’97.

A new Defender arrived in 2020 – and this time, it came standard with carpets.

Plus a few other things.

And now, a new thing!

The Defender is a medium-small (depending on configuration) SUV known – back in the day – for being one of the most off-road capable SUVs ever made. 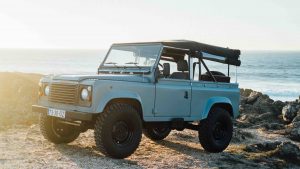 The original model, which was sold without major updates for decades, was marginally capable on-road, due to its spartan/uncarpeted interior, underpowered and gas-hungry ancient (even then) engine and a rugged but primitive suspension system that was great for tracking lions in the African bush but alarmingly unsteady on American highways.

The new Defender attempts to retain the off-roading capability with the luxury – and on-road stability – most SUV buyers expect today.

And now it’s available with a supercharged V8 that makes 518 horsepower. 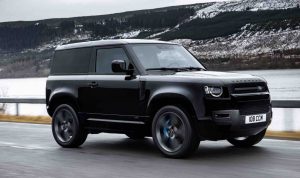 These two come standard with a turbocharged 2.0 liter four cylinder engine paired with an eight speed automatic transmission and a full-time four-wheel-drive system with a two-speed transfer case and four-wheel-drive Low range, for leverage in deep snow and off-road.

If you want more than a four, the P400 swaps that out in favor of a turbocharged 3 liter (inline) six/mild-hybrid drivetrain. The two-row/two-door 90 series version of this Defender stickers for $59,500 to start; the three-row 110 variant lists for $65,100 to start and gets some additional features – including a panorama sunroof, LED headlights and a premium 15 speaker Meridian surround sound system – beyond the engine upgrade. 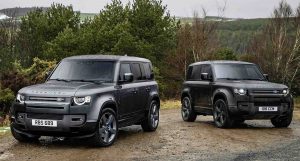 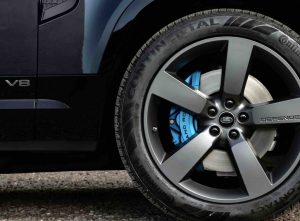 When Land Rover resurrected the Defender for the 2020 model year, it was only available with the four and the six. That was apparently not enough for traditionalists, who prefer their Defenders with more than just that under the hood.

And so, it’s back – with nearly three times as much horsepower as the Defender’s ‘90s-era V8 conjured

Unique and useful features such as the ’90’s available/configurable first row jumpseat in between the driver and front passenger’s seat that lets three ride up front, expanding the two-row’s seating capacity to six.

The V8 is back – in triplicate!

The V8 is expensive; six figure starting price for three times the power of the old V8. 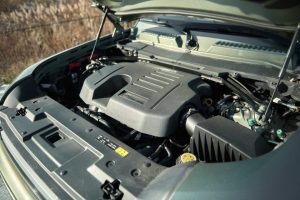 Instead of the four speed automatic transmission with one overdrive gear, the new Defender has an eight speed with multiple overdrive gears. Which is why it can manage 18 city and 21 highway vs. the previous Defender’s 14 MPG in the city and not much better highway, where it struggled to maintain 70 because of its underpowered engine and not-exactly wind-cheating aerodynamics. 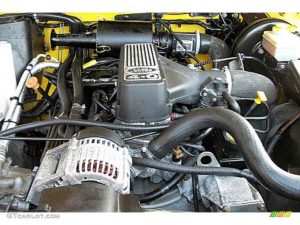 The next-up option is a 3.0 six that’s both turbocharged and hybridized. A 48 volt electrical system cycles the gas side of the drivetrain off as often as possible, as during coasting and deceleration – providing additional boost during acceleration.

The combo produces a total of 395 horsepower and 406 ft.-lbs. of torque, both figures competitive with today’s V8s while more or less matching the mileage figures of the 2.0 liter four.  City mileage is slightly less – 17 MPG. But highway mileage is slightly higher – 22 MPG.

A Defender 90 with the turbo’d six/mild hybrid set-up can get to 60 in about 6.5 seconds vs. about 7.4 for the four cylinder-powered iteration.

Versus about 12 for the old Defender V8. 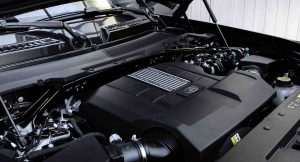 The new V8 option knocks that down to just over 5 seconds. Of course, you pay for that at the pump. This version of the Defender doesn’t match the mileage figures of the four – or the hybrid six. It almost matches the mileage figures posted by the old V8 Defender.

But 15 city, 19 highway goes down a lot better when you can get to 60 twice as quickly – and a lot faster than 70, on the highway. And with almost 24 gallons of gas in the tank, you won’t have to stop before you’ve put more than 400 highway miles behind you.

Regardless of engine, every Defender comes standard with a beefy full-time four wheel-drive system and two-speed transfer case. 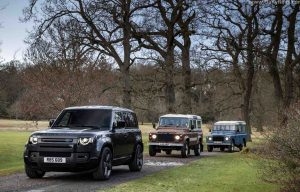 You could buy an off-road vehicle like the old Defender (and similar models like the old Ford Bronco, the old Jeep CJ, etc.) and be able to go places suitable for horses. Or you could buy something that could take you other places, in comfort.

You generally couldn’t buy both – in one.

The new Defender can pick its way over ruts and rocks that would strand – or break – most other vehicles (including most crossovers, which may look like SUVs but are mostly based on cars and have light-duty underthings and don’t have two-speed transfer cases) while not making you wish you’d bought something else to get you to work. 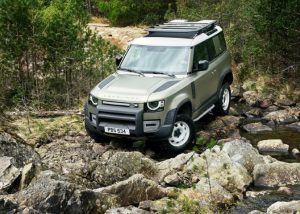 This is an engineering miracle equivalent to designing a Corvette or Porsche that could pick its way over rock and ruts and still run the fastest lap around a race track.

You won’t win a road race in the Defender. But you won’t lose – on the street.

The base-engined version has enough power to get up to highway speeds without making you wish you’d bought the optional engine. There’s enough in reserve to get to 100 – with more to go – which is fast enough for any remotely legal on-road driving in this country.

The little engine makes big torque and feels stronger than you’d expect, especially in the stop-and-go, where all of its torque is available essentially immediately as it is made at an engine speed just above a fast idle. It is not necessary to rev it to reach it. 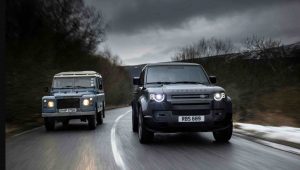 The hybrid six has the same pull down low, with more reserve in the middle and higher ranges. The 48 volt mild hybrid system (similar to the system Mercedes uses in a number of its new models) cycles the six off when its power isn’t needed and provides additional thrust when that is needed. The chief benefit here – other than more power without using more gas (relative to the standard four) is the elimination of the uncivilized chuff-chuff off-on transitions you get (at red lights and so on) with the stop-start systems used in almost all current non-hybrid vehicles. These have 12 volt systems (and conventional starters) not originally designed to repeatedly re-start a stopped engine. You hear it – and feel it.

The six also sounds better, though this is a subjective. Especially because it is an inline six – these being naturally revvy as well as naturally smooth – because they don’t require the heavy balancing needed by V6s to counteract the tendency of the latter layout to not be smooth. 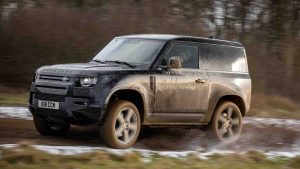 They’ve generally been disappeared from cars because there’s usually not enough room to mount them sideways – transversely – that layout being necessary in a front-wheel-drive layout, which is almost all modern cars except for higher-end cars.

Of course, the V8 sounds best – and not just because V8s have a distinctly authoritative rumbly bass voice down low that rises to a bellow when roused. Add the menacing gear whine of a supercharger boosting a V8 and you arguably have a sound that’s priceless. 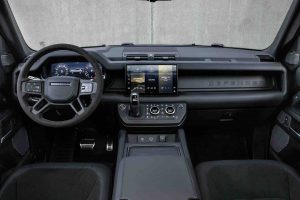 You also have your choice of either two doors or four doors – and two or three rows of seats.  This is in keeping with the way the classic (the ’90s were more than 20 years ago) Defenders were offered.

Both versions come standard with carpets.

Because it’s more than 17 inches shorter, end to end, the 90 is more maneuverable in tight spots – often encountered on narrow off-road trails with steep drops on either side. It’s easier to decide to turn around. In the 110, you’re more committed because there may be no turning back. 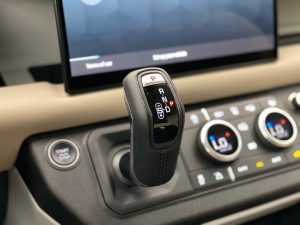 On the other hand the, the 90 is more cramped. Not so much for passengers (though second row legroom is about two inches greater in the 110 (39.1 inches vs. 36.6 in the 90) but rather for their stuff. You’ve got 15.6 cubic feet to work with, which is about what you’d have available in a current mid-sized car, which isn’t much.

Actually, it’s more – because the Defender’s space is more usable as well as accessible, given the wide (and sideways) opening rear door and the tall roofline. Also, the area available isn’t walled off from the passenger compartment, so you can work with what you’ve got.

Or you can go with the 110 – and more than double the space available, to 34 cubic feet. It’s still not as much as you’d have in many smaller crossovers. But then, most of those aren’t set up to cross over much. 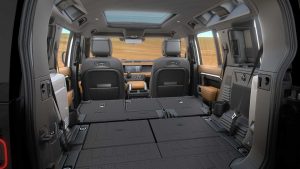 Plus, you can fold the second and third rows completely flat.

There is some functional overlap with the Discovery – the next-up model in Land Rover’s lineup. The Disco is a little bigger (longer) as it comes – because it comes only as a four-door. But it looks more like the generic crossover than the Defender, which looks a lot like it used to.

You can custom-outfit your Defender with an array of cosmetic and functional upgrades and optional equipment, some of it factory available and some of it dealer-added. These include a high-mount air snorkel (to prevent water from being sucked into the engine while fording deep water), side-mount ladder to get up to the roof – and a tent that mounts on the roof – to keep you out of range of lions and tigers and bears, oh my.

Just a few detractions from the overall package.

These include not being able to get the very handy first-row middle seat in the 110 model, which limits its passenger-carrying capacity to six in its three rows, vs. the possibility of just as many in the 90. 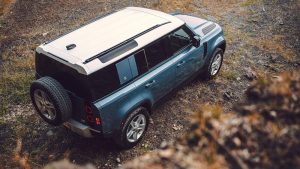 The other being that the V8 will likely prove to be out of most buyers’ range. If you want a V8 Defender, you’ll pay twice-plus the price of the base Defender with the standard four.

While the old Defender of the ’90s had a weak V8, it was standard – and people of average means could aspire to ownership.

Today, V8s are increasingly an indulgence of the extremely affluent only.

It’s no longer either – or.