The Accord is in trouble.

So far this year – and the year is almost over – Honda has only sold about 165,000 of them. That’s down from more than 320,000 of them back in 2017, which was the year just before the Accord was completely redesigned.

In other words, Honda has only sold about half as many of the new Accord this year as it sold of the final year of the old Accord.

So what’s the matter with the new Accord?

Nothing that a V6 – or a manual transmission couldn’t fix. 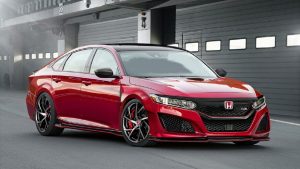 Unfortunately, neither of those are available in the Accord anymore – which may account for it not selling as well as the old Accord . . .

Which offered both of those things.

But there might something else on deck to compensate . . .

The Accord was one of the best-selling mid-sized family sedans in America, vying for the title with the Toyota Camry, its primary rival.

Historically, the Honda offered more personality and driving fun than the Camry and others in the segment because it was available with both a V6 and a manual transmission . . . and because you could put those two things together.

That made the Accord special. 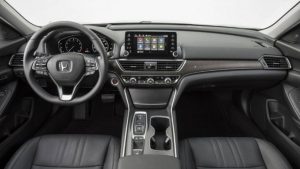 While the Camry was available with a V6 – and still is – the big engine was (and is) only paired with an automatic transmission.

But when the Accord was redesigned for the 2018 model year, the previously available 3.5 liter V6 no longer was. A less powerful turbocharged 2.0 liter turbocharged four cylinder replaced it as the Accord’s top-dog engine  . . . but you could still get it with a manual transmission.

That option’s off the table now, too.

Last year, it was available with a manual, too. 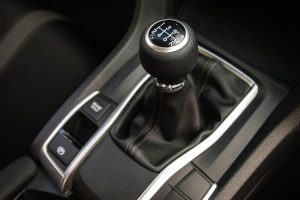 It no longer is, either.

A top-of-the-line Touring trim with the same drivetrain lists for $36,700.

All Accords are front-wheel-drive.

In addition to slight exterior and interior styling tweaks, all 2021 Accords, including the base LX, now come standard with an 8-inch “floating” tablet-style LCD touchscreen. EX-L and Touring trims come standard with a wireless cell phone charging pad.

Standard 1.5 liter engine is capable of almost 40 MPG on the highway, exceptional for a mid-sized non-hybrid sedan.

More rearseat legroom (40.4 inches) than rivals like the Camry.

No more manual option – with either engine.

Not much trunk relative to crossovers.

Not as much personality as it used to have. 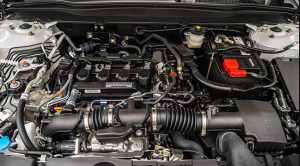 The Accord’s standard 1.5 liter engine makes 192 horsepower and exactly the same amount of torque (192 ft.-lbs.) at just 1,600 RPM. It is paired exclusively with a continuously variable (CVT) automatic transmission.

Last year, you could opt for a six-speed manual transmission – a type of transmission no other car in this class offered. Most buyers went for the automatic, but the availability of the manual set the Accord apart from the others in the class.

So why is it no longer offered?

In two words – the government.

Honda, along with every other car company, is under great pressure to increase the mileage of the cars it sells in order to avoid the fines it would otherwise have to pass on to buyers for not meeting federal fuel economy standards. The 2020 Accord with the 1.5 liter engine and the six-speed manual transmission carried an EPA rating of 26 city, 35 highway – as opposed to 30 city, 38 highway for the ’21 with the same engine and the CVT automatic.

That 4 MPG or so difference may not seem like a lot – and it isn’t, especially given that the cost of gas is still quite low – but it makes a lot of difference in terms of complying with the MPG “fleet averages” demanded by the federal government and the fines imposed – and passed along – for not complying with them.

The pressure to comply is so great that even the Sport version of the Accord is also now automatic only.

But the good news is the 2.0 liter engine comes with a 10 speed automatic rather than the CVT. Shifting through the gears feels (and sounds) better than varying through the ranges, as CVTs do. 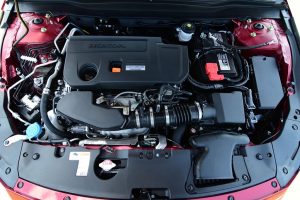 Also, the 2.0 liter turbo four – which makes 252 horsepower – maintains the performance of the now-absent 3.5 liter V6, despite the larger engine making 278 horsepower. The ’21 Accord 2.0 with the ten speed gets to 60 in about 6.3 seconds, about the same as the old Accord with the V6 and the manual six-speed.

The torque – which is an application of leverage – is what gets the new turbo four Honda to 60 as quickly as the old V6 Honda.

Interestingly, the gas mileage difference is essentially nil as well. 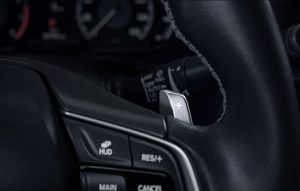 So what accounts for the ditching of the V6 and the six-speed, if not gas mileage?

Not of the bad stuff that fouls the air. Those emissions have been culled to practically nil. When you hear about “emissions” nowadays, what it is meant are emissions of the inert gas, carbon dioxide – which doesn’t cause or contribute to smog/respiratory problems but is claimed to contribute to “climate change.” A 3.5 liter V6 “emits” more of this gas than a 2.0 liter four and that is important as far as complying with the latest – and pending – federal “emissions” standards.

That’s why the six was nixed.

As far as the manual with the four,  it cost Honda about 2 MPG overall on government fuel efficiency tests vs. the 10-speed automatic and that’s why no soup for you. 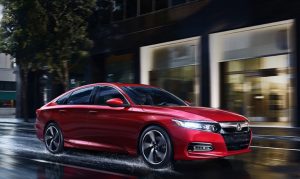 The 2.0 Accord is just as quick as the old V6 Accord but it’s not the same – in a way that’s hard to quantify but no less real for being so.

Honda makes one of the best V6 engines, if you like an engine with personality as well as durability. It revs – and it lasts. There are so many 20-year-old V6 Accords still in use today that it’s hard to avoid seeing them, unless you close your eyes.

The turbo four feels stronger in traffic, coming off the line – because it is. That swell of turbocharged torque is both pleasant and practical in that this is not an engine that needs to be revved to move you. For people who commute and rarely have the chance to open her up, it is probably a better engine than the old V6, which did its best work when floored the pedal and had the time and space to let it rev to 7,000 RPM before you grabbed the next gear up – which you could do because there was a third pedal to work with.

This was fun, especially after a long day at work. A V6/manual Accord was a car you took for a drive when you didn’t need to – just for the fun of it. And yet, it was still just as practical for the drive to work on Monday and to cart the kids home from school, too.

That Accord was a kind of stealth BMW, for two-thirds the price – back when BMWs were still driving machines, at any rate.

Honda’s mistake here is that this Accord is too much like the others in this class, the Camry and the Mazda6 – both of which also are automatic-only (and in the case of the Mazda, also four cylinder only). If anything, the Camry – the car that for decades has been the apotheosis of the Family Car – is now the sportiest car in the class, because it alone still offers a V6 – along with a Nextel Cup-looking body kit and suspension tuning for the TRD version. 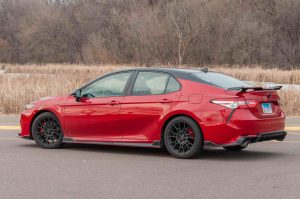 If anything, Honda arguably should have doubled-down on the Accord’s sporty bona fides, and not just because it would have maintained separation between it and arch-rival Camry. Sedans – all of them, including the Camry – are losing market share to crossovers because they can never be as practical as a crossover.

It is instructive that the only sedan doing well right now is the Dodge Charger – arguably because it does not emphasize practicality and barely gives a flip about gas mileage, either. It comes standard with a big V6 – and offers a huge V8. 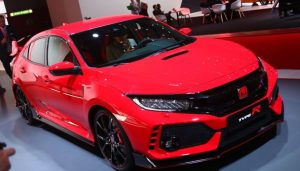 People love it – and they buy it, despite the current Charger being an automotive Aurochs. The 2021 is largely the same car as the 2007, which was the last time Dodge gave it a major makeover.

Because it doesn’t need one.

Because people still want that big rumbly engine – not an engine that’s size-appropriate for a compact economy car. But there may be something coming to address these concerns: A Type R variant of the Accord that definitely ups the ante, visually as well as functionally. It may be available as soon as this summer. 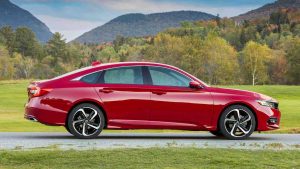 The Accord has the sleek fastback styling of a hatchback; why not make it one?

Instead of a 16.7 cubic foot trunk – which is a good sized trunk for a mid-sized sedan – there’d be twice as much available space, which would make it functionally more competitive with a crossover.

Without being a crossover.

Sedans like the Accord – and the Camry – are having trouble competing with crossovers as family cars because they have trunks and that limits what they can carry, which limits who wants to buy them. If they could be made bigger – full-size, with full-size trunks –  they’d probably sell better (see the Charger) but the problem is the government is making it really tough for any car company to sell big cars, which need big engines. Dodge gets away with it because it’s the last of the Mohicans and also because the Charger has been around forever. The tooling costs were probably amortized ten years ago. Pouring millions into R&D’ing a new big car is a hairy prospect given the good odds such cars will be crippled by Green New Deals and such.

But, converting a fastback into a hatchback solves the trunk/space problem without incurring government problems. 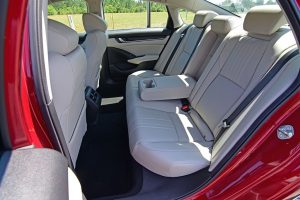 The Accord does have second-row room in its favor. The 40.4 inches of legroom back there is two inches more than in the Camry’s backseats (38 inches) and more than in most same-footprint crossovers, too.

The Accord’s trunk is also larger than the Camry’s 15.1 cubic footer and the Mazda6’s 14.7 cubic footer.

There’s a lot to recommend it. It’s just a shame about what’s missing.

All trims come with automatic climate control AC – but if you want more than just a four speaker stereo, you’ll have to move to the Sport or higher trims; these come with a much better eight-speaker stereo system – but it’s a roughly $2,500 price bump to go from the LX to the Sport.

A ten-speaker premium system comes standard in EX-L and Touring trims, which also get heaters for the backseats, rain-sensing wipers and a Heads-up Display (HUD).

The Sport comes with a 19-inch wheel/tire package and paddle shifter controls for the automatic transmission. 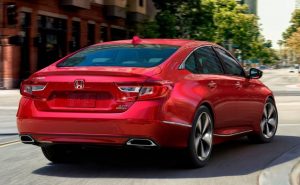 The Accord is still a really good car – but that’s just the problem. And not just for the Accord.

Without a clutch pedal, it’s less so.

A V6 would make it more so.

The Type-R tease – if it becomes fact – a lot more so.