Guy writes: We went to have a look at the ’76 Trans-Am we’re considering on Saturday morning; not great weather for looking at cars as it was raining but after having a good look around it we think that we are going to go for it. It is going to be for my wife who is a big American car fan and used to have her own ‘a 67 Impala , but had to give that up when she moved down from Yorkshire to be with me in Norfolk so it is bit like payback to her in a way.

Ok so here it is , a yellow 400 T/A no T tops , but rust free with it being a California car, a few dings around the body, needs new fuzzies on both windows as well as rubber seals on the outside of the window as they are all cracked and perished. The phoenix is faded and looks to have some rust spots under the decal itself and the panel under  the car that joins left to right and is some kind of spoiler I think that goes under the radiator is missing altogether. Looks a little saggy at the back but apart from that kinda looks ok. The bloke wants £13,000 – which is not out of the way for a car like that over here , so will have a chat with him again today and see if we can do a deal. All in all we are going to need some bits including the side badges and nose badge , shocks , etc. The interior is black vinyl and is good , glass is good and boot floor is rust free, so there you have it!

My reply: I’m something of an authority on second generation (1970-81) TAs and the ’76 model in particular, having owned several. A few things come to mind that you may be interested to know: 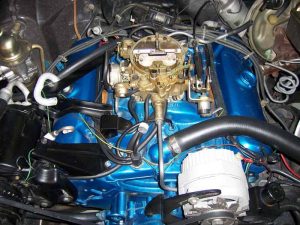 1976 was a transition year as well as the first – and final – year for a number of TA features. For example, it was the first year you could order T-tops as a factory option, though these were made by Hurst not Fisher and were only available with the 50th Anniversary Limited Edition (black and gold, with German-style lettering) cars. The Hurst tops are smaller than the Fisher tops and were notoriously prone to leaking – so it’s probably good your car hasn’t got them!

1976 was also the last you could buy a 455 V8 and the last year for the polycast Honeycomb wheels; in 1977 these were replaced as the TA’s optional wheels by the alloy Snowflake type. The ’76 (and ’77) came standard with Rally II wheels.

’76 was also the just about the last year for the deep blue metallic engine paint pictured above (a few early ’77s had this color but then transitioned to a corporate baby blue non-metallic). 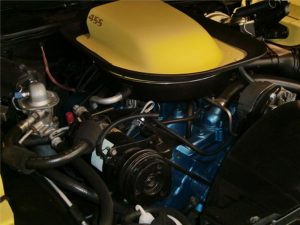 As mentioned in my earlier post, ’76 was also the final year for the old-style shaker scoop, which was larger than the ’77-up scoop as well as much easier to make functional, by simply removing the bolted-on block-off plate.

The ’76 TA has a one-year-only front clip. Also a unique to this year lower valance panel – the piece your car is apparently missing.

The good news is you can get replacements from sources such as AMES Performance Engineering and Year One, among others. Decals are also readily available. You may want to have your car’s history researched and documented by Pontiac Historic Services (PHS). For a small fee, they will tell you which of the two plants your car was built at, the options it had and where it was sold, along with other neat details.

Your car has the standard 400 and three-speed TH350 automatic; it probably has 2.73 gears in the rear. These versions aren’t screamers but are ver pleasant drivers as the Pontiac 400, though down on horsepower that year, still made abundant torque. If you want a little more pep without serious modifications or expense, consider the following upgrades:

Replace the rear gears with 3.23 gears.

Replace the horrid factory exhaust (which is a single exhaust with two outlets that chokes the engine) with a proper dual exhaust. Even if you must use cats, two high-flow units vs. the one GM pellet unit will really wake the car up.

Open up the shaker, as described.

Have someone who knows how tune the carb and ignition for maximum performance.

These mods will make the car much quicker and a lot more fun without hurting drivability at all.

You and your wife are in for a treat!

Slow drivers… is it getting worse?