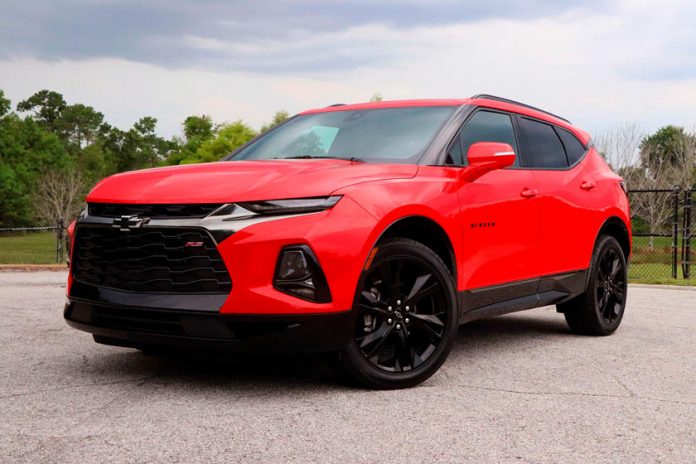 How far can you stretch a name?

The Chevy Blazer was (once-upon-a-time) a full-sized, two-door, truck-based SUV with a removable roof and a V8 engine. Lee Majors drove one in The Fall Guy.

The current Blazer is a five-door, hatchback’d crossover with a four cylinder engine driving the front wheels (with a V6 and AWD optional).

The roof does not come off.

Is the aura enough? 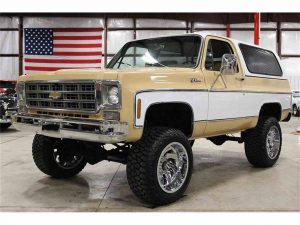 The Blazer – in its modern iteration – is a mid-sized, five-passenger crossover similar to other light-duty models in the same class like the Honda Passport, Ford Edge and Hyundai Sante Fe.

It differs from mid-sized SUVs like the Ford Explorer and Jeep Grand Cherokee – which are based on rear-drive layouts, offer four-wheel-drive (with Low range gearing)  and – in the case of the Jeep – can be had with a V8 engine.

Prices start at $28,800 for the base front-wheel-drive L trim, equipped with a 2.5 liter four cylinder engine.

A more powerful 2.0 liter turbocharged engine is available in the 2LT trim, which stickers for $33,100 with FWD and $35,100 with the optionally available AWD system.

All trims, including the base L, now come standard with the previously extra-cost automated emergency braking system.

A trailering package is available with the V6 and FWD. 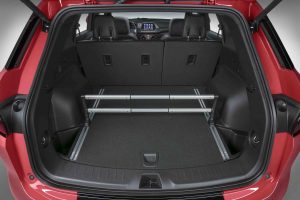 Choice of three different engines – vs. the usual two (or just one).

Isn’t as rowdy as it tries to look.

Only tows 1,500 lbs. – even with its optional V6 – unless you buy the extra-cost trailering package.

Costs several thousand more to start than the Sante Fe (base price $26,725) doesn’t come standard with a V6 (the Honda Pilot does) and hasn’t got as much cargo space as the Ford Edge. 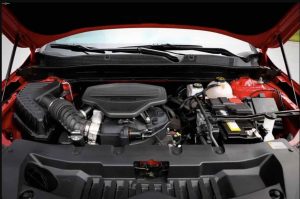 In the Blazer’s corner is the fact that there are three available engine options.

The standard engine is a  2.5 liter four, without a turbocharger, that makes 193 horsepower.

This is pretty spectacular output – historically speaking – for those who can remember when 5 liter V8s in performance cars like the Camaro and Mustang weren’t making much more power.

It’s especially impressive given the little four isn’t turbocharged, as so many modern fours are – to make up for the fact that they are fours and as such are usually not powerful enough to adequately propel a vehicle like a mid-sized crossover that weighs 3,782 lbs. – several hundred pounds more than a mid-late 1980s Camaro Z28 or Mustang GT with a 5 liter V8 engine.

Of course, the four cylinder Blazer is not as quick as an ’80’s-era V8 performance car – but it’s not slow, either. It needs about 7.9 seconds to get to 60. And it delivers an EPA-rated 21 MPG in city driving and 27 on the highway – much better mileage than an ‘80s-era 5-liter V8 muscle car could manage. 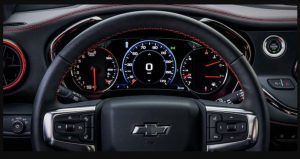 A nine-speed automatic is the standard transmission. This version of the Blazer is front-drive-only.

If you want all-wheel-drive, you’ll have to buy the 2.0 liter turbocharged engine, which comes standard in the 2LT trim. This one makes 227 hp – more power than 5 liter V8s were making in the mid-late 1980s – and you can pair it with FWD or (optionally) AWD.

Interestingly, the stronger 2.0 liter engine delivers better mileage – 22 city, 29 highway  with FWD and 22 city, 27 highway with AWD – than the base 2.5 liter engine/FWD combo. 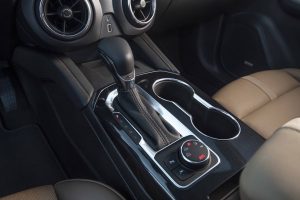 The Camaro-themed RS Blazer gets the same 3.6 liter V6 that’s available in the Camaro – mounted sideways (the Blazer being a FWD-based vehicle) and powering either the front wheels only or all four, if you buy the optional AWD system.

This one can also get to 60 in about 6.5 seconds, which compares favorably with the performance of ‘80s-era V8 muscle cars.

The original Blazer was a hulking 4×4 with a rowdy V8. The new Blazer is nothing like it – and that has its good and bad points.

The old Blazer was loud, handled atrociously and drank twice as much gas to go half as far as the new Blazer does. Doing 70 felt like doing 120; in the curves, 35 felt like 65.

But it was fun to drive – especially with the removable hardtop removed and nothing but the roll bar in between you and the sky above. With a lift kit and some knobby tires you could go practically anywhere you liked, any time of year. The V8 roared even as it sucked and the latter was made up for by the former in the way that a ribeye isn’t good for your arteries but it’s so good going down. 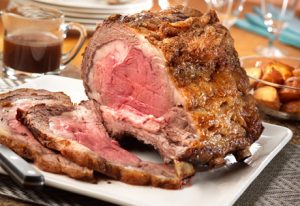 This Blazer’s smooth and quiet and far more comfortable, especially for passengers. You can take it through corners at speeds twice as high as the tip-over speed for the old Blazer. It gets better gas mileage with the cruise control set at 80 than the old Blazer did at 55.

By any objective measure, it’s a much better vehicle. But it’s missing the thing that makes a man get attached to a vehicle.This is a problem besetting almost all new vehicles.

They are so good they’re bland.

It doesn’t surprise or challenge you – so it doesn’t excite you. There’s not much to do, really, but turn on the stereo and get to where you’re going. Which is of course what a vehicle is supposed to do.

But a special one does other things, too.

What you get here is a more visually interesting alternative to visually bland rivals like the Pilot, Sante Fe and Edge – with the perk of a wider selection of engines (the Pilot comes with just the one engine, take it or leave it; the Sante Fe gives you the option to pick one of two). 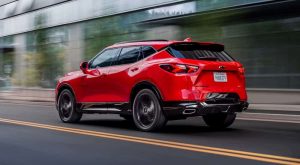 But the looks of the thing do not line up with the drive of the thing and that can be a little disappointing, in the same way that a jar of salsa that touts how spicy it is via colorful graphics but which you find you can easily drink straight from the jar without needing a glass of water to cool the nonexistent fire is a let down.

The Honda Pilot – which looks as bland as piece of toast – is actually quicker than the RS Blazer. It gets to 60 in 6.2 seconds.

Another visual-functional mismatch is the Chevy’s very weak tow rating – just 1,500 lbs. – even with the V6, which is less than many cars can tackle – unless you buy the extra-cost towing package. It then increases to 4,500 lbs. – which is more than the Pilot’s max of 3,500 lbs. 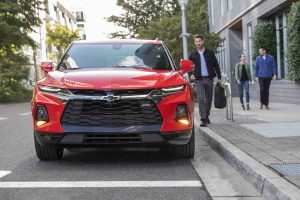 But the Pilot’s standard tow rating is still twice as high as the Chevy’s.

The Blazer now comes standard with automated emergency braking, an increasingly hard-to-avoid “feature” which slams on the brakes peremptorily – for saaaaaaaafety. In theory, it only does so when the driver has failed to apply the brakes due to inadvertence, such as not noticing that the car ahead has slowed or stopped. In practice, the system will apply the brakes during passing maneuvers, when the computer thinks you’ve cut it too close – or in other situations that don’t warrant braking, as when a car ahead has slowed but you can see it is signaling a turn and you know it will be out of your path by the time you get to where it is.

The computer doesn’t know – and on come the brakes.

This is not a Chevy-specific problem. Every new car with this “feature” has the same problem.

The good news is lane keep assist – even worse –  is not yet standard and so can be avoided.

This saaaaaaaaaaaaaaaaafety feature also backseat-drivers you from within the dashboard. If you attempt to change lanes or turn off the road without signaling, the car will try to pull the car back into its lane. This systems is touted as being about “safety” but is highly peremptory and adds needless annoyance to the drive.

The bad news is that lane keep assist is standard in all Blazer trims above the base LT – which means if you want a stronger engine than the base 193 hp non-turbo’d engine or AWD you have to accept the “assist.” 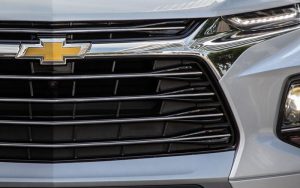 It has a Camaro-like front end treatment and gauge cluster – complete with a hugely optimistic 170 MPH speedometer – as well as the RS (for Rally Sport) nomenclature that dates back to the classic Camaros of the ’70s.

It also has something no Camaro ever had – back seats with almost as much room as up front. There’s 39.6 inches of legroom in the Blazer’s second row – which is (no joke) more than a foot more legroom in the current Camaro’s back seats. 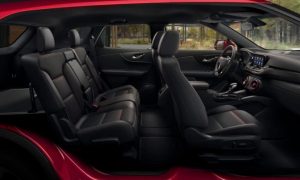 There’s 30.5 cubic feet of space behind the second row, too, for whatever you need to tote – about three times as much space as in the Camaro’s trunk. This can be expanded to 64.2 cubic feet by lowering the second row seatbacks.

Three-row rivals like the Pilot have more total cargo capacity (83.8 cubic feet) but because they have that third row taking up space, they have less space behind the third row (16.5 cubic feet).

There are, hwoever, also two-row rivals like the Edge, which has nearly 40 cubic feet of capacity behind its backseats. And the Hyundai Sante Fe – which is a slightly smaller vehicle in terms of its footprint (187.8 inches long vs. 191.4 for the Chevy) but still manages to have more cargo space behind its second row (35.9 cubic feet) as well as more total cargo space (71.3 cubic feet) and more backseat legroom (40.9 inches).

But they don’t look as rowdy. 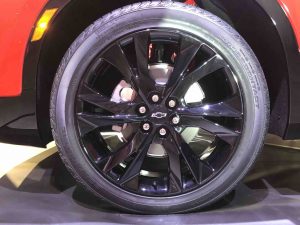 Even the base L trim comes standard with mondo 18-inch wheels, part of the effort to conjure a Camaro-ish aura.

But these 18 inch wheels mean 18-inch tires and those are going to cost more than 16 or 17-inch tires – in addition to being more vulnerable to sidewall blowouts from potholes and curb strikes, because their sidewalls are shorter and stiffer than 16 or 17 inch tires.

The big wheel look is popular – but then so were bell bottom cords, once upon a time.

On the upside, Chevy includes four USB ports and a good six-speaker stereo as part of the standard equipment suite.

On the downside, even the $43k Premier trim comes with a mere eight-speaker system and while wireless sail fawn charging is available, it’s only offered with the high-dollar RS and Premier trims. 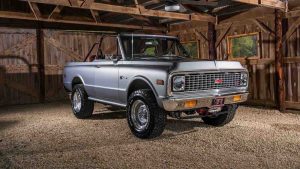 What might Chevy have done to functionally spice things up?

This is a tough question to answer because the new Blazer’s layout is not as amenable to spicing up as the old K5 Blazer’s was.

Ford is approaching the Bronco reboot more in line with what the original Bronco – which was originally a rival of the original Blazer’s – was like. Including real off-road capability (body-on-frame construction) and a serious 4WD system with the ability to route almost all the engine’s power to either the right rear or left rear wheel if that’s the only one that’s got grip.

The Ford Explorer is also more real-deal, being based on a rear-drive layout and being available with 4WD – and a 400 horsepower V6. 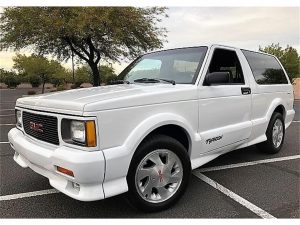 The Blazer is built on a car-based (and FWD-based) chassis, so heavy-duty’s out.

But why not make it perform more like the Camaro it is trying to look like? The V6 is a good start but it needs more power to make it stand out. How about a rowdy exhaust for the RS, with those wastegate-like baffles that pop open under WOT?

How about adding a turbo to the V6 and a high-performance AWD system  – like the old GMC Typhoon – remember that one – had?

That would be actually rowdy – and so, fun.

This isn’t a bad crossover – but it’s hardly a Blazer.

And not much of a Camaro, either.