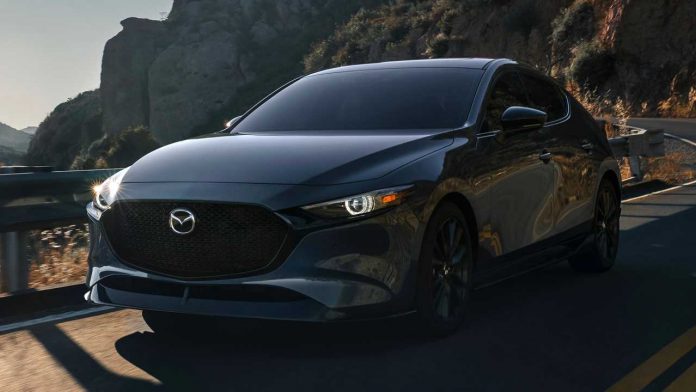 The Mazda3 just got speedier.

The new engine also comes paired with AWD . The FWD-only Speed3 was a terror that was terrible in the snow.

This time, you can get where you’re headed when the weather’s not great – and get there faster, too. 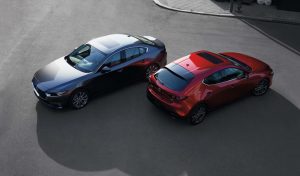 In addition to being an economy car, it can also be a high-performance car – and something in between the two.

Prices start $20,500 for the base sedan equipped with an economy-minded 2.0 liter four cylinder engine, six-speed automatic transmission and front-wheel-drive. This one can deliver almost 40 MPG on the highway, among the best you can get without getting a hybrid.

The hatchback comes standard with a larger, more powerful 2.5 liter engine (optional in the sedan) without a turbo. It lists for $22,500 to start.

Both the sedan and the hatchback sedan can be ordered with a turbocharged version of the 2.5 liter engine that makes 250 horsepower – nearly as much as the old Speed3’s turbocharged 2.3 liter engine – paired with the six-speed automatic and standard all-wheel-drive.

Not that there’s anything wrong with that. It’s just not for everyone.

The main change for 2021 is the addition of the high-performance 2.5 engine to the lineup. Last year, the strongest engine you could get in a 3 was the 2.5 liter engine without the turbo.

Three engines to pick from.

The new high-performance engine isn’t restricted to one bodystyle.

Entry level in price, but not features. Even the base $20k sedan comes standard with an eight-speaker stereo, LED lights and a larger-than-most 8.8 inch LCD touchscreen.

New high-performance engine is paired only with an automatic.

New high-performance engine is only available with AWD.

New high-performance engine is only available in high-cost trims. 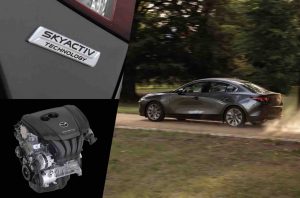 The sedan comes standard with a 2.0 liter four that makes 155 horsepower. It does not have a turbo, unlike the standard engines in several rivals – which may appeal to buyers who prefer a simpler engine with fewer potential things to go wrong after the warranty expires.

Equipped with this engine, the 3 sedan can deliver 28 MPG in city driving and 36 MPG on the highway.

A 2.5 liter engine – also without a turbo – is standard in the hatchback and optional in the sedan. This one makes 186 horsepower and can be paired with all-wheel-drive.

There’s only a slight difference downward in MPGs if you opt for this more powerful engine, which rates 26 city, 35 highway. 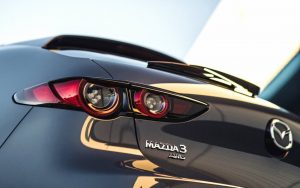 Once again, the MPG difference is slight – 23 city, 32 highway – notwithstanding  the almost-100-horsepower difference between the base 2.0 engine and this engine.

And the AWD system connected to this engine.

It’s a measure of one of the major difference today vs. the old days, when buying a performance engine meant buying a lot more gas.

Which brings up something about gas.

The 3’s top-performing 2.5 liter engine needs premium to deliver its top performance. On regular, its output dips to 227 hp. Even so, this is more output than is available in other entry-level compacts such as the Toyota Corolla – its strongest available engine is a 2.0 liter four that makes 169 hp – and the Honda Civic, which is no longer available in Si trim for the 2021 model year. That means the strongest engine you can get in a new Civic is a 1.5 liter turbo four that makes just 180 hp.

This makes the turbo’d 3 the new hot shoe in the segment, even if there’s not much for your left shoe to do (the Civic Sport is still available with a manual). 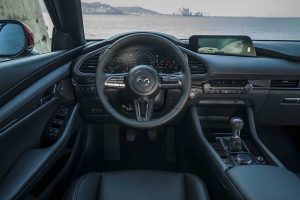 Even though the turbo’d 3 is automatic-only – which is a big downer for people who enjoy shifting for themselves – it is a six-speed automatic. Not an eight or ten speed automatic and not a continuously variable (CVT) automatic.

The latter is becoming difficult to avoid in any class of new car as the car companies struggle to wring an extra MPG here and another MPG there out of their drivetrains, not so much because buyers are basing their decisions on whether a given car gets 35 MPG vs. 37 MPG but because of the pressure to meet federal fuel economy fatwas, certain to increase (possibly by double digits) if the Hair Plugged Man succeeds in shanghai’ing the election.

Even so, Mazda manages to comply with the fatwas – see the MPG numbers above – or get close enough to make the fines it has to pass on to its customers small enough to be palatable – without resorting to transmissions with multiple overdrive gears on top or no gears at all (CVTs). 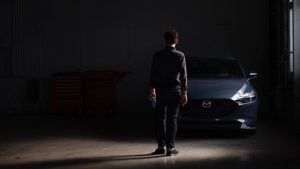 This is more than just a matter of preference, too. A six-speed transmission with two or three fewer gears has fewer parts and doesn’t have to be as complex a transmission as one with eight or nine or ten speeds. Which means an inherent long-term durability advantage because it is an engineering axiom that the more complex a system is, the greater the odds of failure, increasing over time.

A conventional six-speed automatic is also likely to not need replacement over the life of the car because a conventional automatic can be repaired while many CVTs are throwaways.

Once they fail, you have to replace the whole thing. 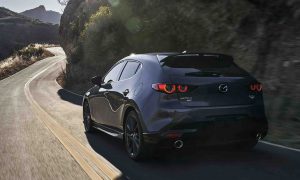 Mazda continues to focus on making driving fun, even in cars that don’t make you pay a fortune for it. If you want something more than an economy car, you will like this car, even the sedan with the 2.0 liter engine. Not because it’s fast – because it isn’t – but because it responds with enthusiasm when pushed.

Feed it throttle in a curve and see for yourself. Unlike so many economy cars – which don’t like this much – the little 3 eggs you on to feed it some more. It feels like there’s less of the usual built-in economy car understeer – the tendency of the front wheels to turn in more toward the inside of the curve in proportion to the amount of turning you’re doing to the steering wheel. Kick the six speed down a couple of gears to hold up the revs and use the throttle to keep it in line. 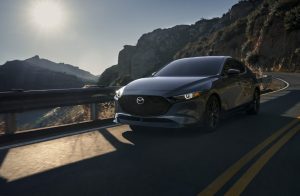 The rear will start to swing toward the outside of the curve, as you’d expect – but it won’t come around you as soon or as abruptly, so long as you keep your right shoe down. That plus steering that’s also intangibly right and a suspension that gives without excessive roll.

It’s not well-known outside the small world of professional car test jockeys but Mazda has replaced BMW as the car for drivers. Every car in the lineup – even the big crossover SUVs – has more than a little Miata in it. That hard-to-pin-down but extremely important something that makes you want to go for a drive – and prolong the drive.

However, this car would be more fun if it were available with a manual transmission, especially the base sedan with the 2.0 liter engine. Being able to shift through the gears and work the clutch makes up for not much power to work with. 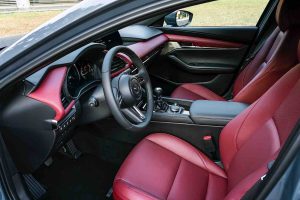 Still, it’s a good-times car and that kind of car is becoming hard to find, especially in this class of car.

Also on the upside, the 3’s mid-tier 2.5 liter engine is one of the strongest engines in the class – and without a turbo.

Plus, it is available with a manual. And without AWD, if you like to chirp the tires.

The top-of-the-line 2.5 liter engine with the turbo makes the 3 almost as speedy as hot hatches like the Subaru WRX – which isn’t a hatch anymore. Subaru only sells that one as a sedan, which means it comes with a small (12 cubic foot) trunk as opposed to the Mazda hatch’s 20.1 cubic feet behind its back seats (and 47.1 cubic feet total capacity).

Its main advantage vs. the hottest-engined version of the 3 is that it is still available with a manual six-speed transmission.

That may, however, change. The WRX is going to be updated significantly for 2021; among other things it will lose its standard 2.0 liter engine in favor of a version of Soobie’s new (and stronger) 2.4 liter engine. It will probably still be available with a manual – but we won’t know until we see. 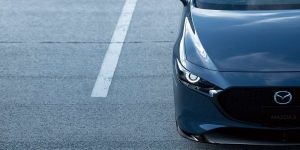 Like Burger King, Mazda lets you have the 3 your way instead of just one way. Not everyone wants a sedan – and not everyone wants a hatchback. And those who want a hot engine don’t have to pick the bodystyle they don’t want to get the engine they do.

The sedan is several inches longer (183.5 inches) than the hatch (175.6 inches) and of course has a trunk rather than a cargo area. The difference there is 13.2 cubic feet in the trunk vs. 20.1 cubic feet behind the back seats and the hatch’s ability to swallow larger items by folding its back seats and using some of the passenger space as cargo space, when the need arises. The sedan’s smaller trunk space has the virtue of being a more secure space, whatever you put in there being both less visible as well as harder-to-get-to. 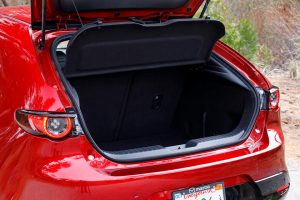 Both are arguably among the most attractive vehicles in the class. Mazda makes the effort to make even its entry-level car look like something that isn’t, inside and out. The shapes are graceful rather than gaudy – especially the front end, which doesn’t have Angry Samurai Face to make up for what it hasn’t got under the hood or in terms of that intangible something that makes Mazdas appealing on an emotional level.

Inarguably, the 3 is among the best-equipped car in the segment – and then some. An eight-speaker stereo and adaptive cruise control are standard equipment, even in the base sedan. You can get a 12-speaker stereo, adaptive headlights and a Heads Up Display (HUD) in the higher trims and so equipped a 3 is amenities-comparable to cars that aren’t entry level.

The one nit with this Mazda is the same nit which afflicts all Mazdas. It is the awkward-to-use interface for the stereo/apps/infotainment, piped through the standard 8.8 inch LCD display. It’s a button push, scroll and then push again system. And there is no way to easily manually fine-tune such functions as radio station selection with just one button. You have to first find the function, select it, then use the << or >> to get it up or down, then select once you’ve found. 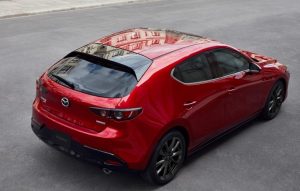 This can be aggravating while you’re moving. But it’s compensated for by how much more fun this car is when it’s moving.

Three engines, two body styles and so much else to choose from. The only thing that’s missing here is the choice to shift for yourself.