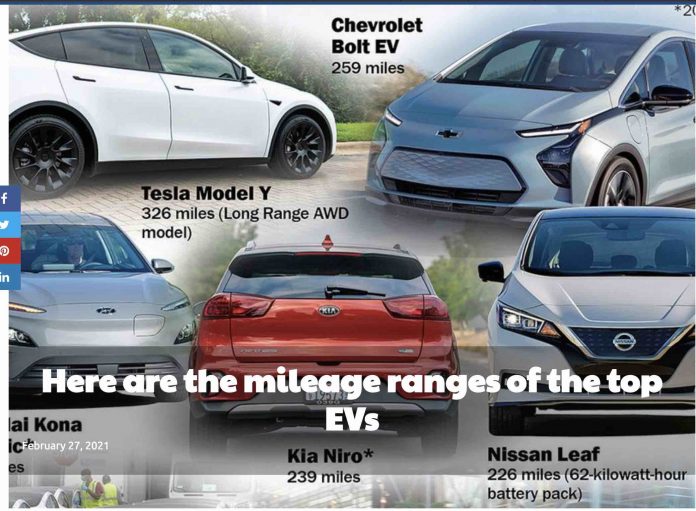 They are very misleading numbers. The first reason being that the way the number is arrived at by what the EPA styles the Multi-Cycle City/Highway Test Procedure – which does not reflect the way most people drive a car in the the real world.

Because to begin with the car isn’t actually driven at all.

The test is performed on a chassis dynamometer that simulates driving. Mostly low-speed, low-load and stop-and-go driving, which just happens to be the type of driving that electric cars (and partial-electric hybrid cars) are best-suited for in terms of range, even though this is almost by definition not very far.

Their range declines when they are operated on the highway, especially for extended periods of time – because you can’t keep moving without using energy whereas it takes almost no energy to remain stationary and very little energy to creep forward and intermittently at “city” speeds.

Non-electric cars, it’s worth pointing out, go farther on the highway – at high speeds – than they do put-putting along at “city” speeds.

In addition, the testing is done inside – in a room that isn’t freezing cold or steamy hot, two real-world realities that significantly affect the range of electric cars because of the increased load on electrically powered accessories such as the heater (a no-cost accessory, in terms of gas mileage or range in a non-electric car) and the air conditioner as well as the energy expended keeping the battery warm – and cool – as the real-world temperature swings to extremes.

The EPA  tacitly concedes its EV testing protocols are disingenuous by ”adjusting” the range numbers it promulgates via mathematical legerdemain which is very opaque and so very suspicious.

It also reports something styled MPGe – or “miles per gallon equivalent.” No one outside the world of Wonkdom understands what this means because it is very hard to understand what it means, unlike say 23 miles per gallon in city driving and 35 on the highway.

A gallon of gas can be expected to move the car about that far. Yo comprendo. Because anyone can comprendo that. Multiply the city or highway range times the number of gallons and you comprendo how far the car will go on a full tank. Average the city and highway number and you know the average mileage.

It is not rocket science and more to the point, it is not fundamentally disingenuous.

The mileage figures touted had also better be accurate. If not, they’ll be litigated. Ask Hyundai – which got into some hot water a few years ago for overstating how far its cars could travel per gallon – and that only slightly exaggerated. The company claimed several of its cars delivered 40 MPG or better when they actually delivered 1-6 MPG less.

That was slightly shady – but here’s pitch dark:

The 2021 Nissan Leaf supposedly travels “123 city/99 highway” in “MPGe” terms. But the car is only rated as being capable of traveling 149 miles all told (with its standard battery; if you pay a few thousand dollars more for the “long range” battery, the car supposedly can travel 226 miles).

That of course being just the point.

“123 MPGe” sounds great, for advertising purposes. Because it sounds better – like three or even four times the mileage of a non-electric car.

But the fact is the Leaf can barely go that far all told. If you believe that number.

Meanwhile, a non-electric car rated as being able to travel 23 miles on a gallon (that has a typical 15 gallon gas tank) can keep on traveling for about 345 miles and that’s actually great – especially when you also consider that the same car can travel 500-plus highway miles on a full tank.

Even if the touted numbers are off by a little, you still have a long way to go.

Which you don’t in any EV.

The excuse given for this MPGe shuck and jive is that it is hard to render a direct equivalent between a gallon of gas and a kilowatt-hour in readily comprehensible terms. Which is perhaps true. In which case, why not something more above-board?

The use of “MPG” terminology to tout EV “mileage” is fundamentally dishonest for this reason and also because EVs “burn” fuel very differently than internal combustion-powered cars do. They are less efficient in proportion to how much – and how fast – they move. 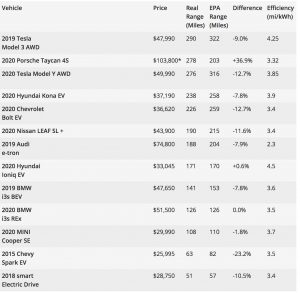 More evidence of the flim-flam is provided by independent testing of EVs in real-world driving, on the actual road – and specifically at highway speeds. The web site Inside EVs – which cannot be accused of anti-EV bias – tested several EVs (see here) and found that the real-world range of models such as the Tesla Model Y and Model 3, the Nissan Leaf, the Chevy Bolt and the Hyundai Kona EV was substantially less than advertised.

The Model Y’s asserted range of 316 miles, for instance, turned out to be 276 miles – a difference of almost 13 percent less than advertised. Also the Chevy Bolt, which went kaput after 226 miles rather than the touted 259. The Model 3 they tested was off by 9 percent (290 miles before MPG Empty vs. 322 advertised).

Keep in mind that EV MPGe matters a great deal more than IC MPGs because of the real-world reality than when you run low in an EV you will be stuck whereas the IC car is back on the road, fully fueled, in less than five minutes.

Some EVs did live up to the billing, such as the Porsche Taycan EV – which exceeded its touted range (it went 278 miles – farther than the 203 EPA says it could go). But it was the exception rather than the rule and it also is a cost-no-object Porsche with a base price of almost $104,000 – rendering its efficiency economically irrelevant.

The fulsome scurvy truth is that a deliberate fraud-via-omission is being perpetrated on the car buying public, with the connivance of  the Poodlized car press and of “consumer” publications such as JD Power, which recently published without qualification the range numbers touted by Tesla, Nissan Chevy and Kia – the “top” EVs, in their advertorial lingo.

This is dereliction of duty on an epic scale. Remember: Hyundai was class-actioned and made to pay out several hundred million dollars for having oversold the range of its non-electric cars by as little as one more mile-per-gallon than they actually went per gallon.

It’s of a piece with the lack of interest in the EVs’ tendency to cremate its owners, self-driving EVs that drive into things – and so on.

It is exactly like the excuse-making indulgence some misguided parents extend toward a favored but deficient child, who is considered “exceptional” or “special” rather than what it actually is. The same refusal to openly discuss the reality. The same determination to remain in a delusional state of mind that borders on the hallucinatory – because dealing with the reality is perhaps too painful.

And in this case, too political.