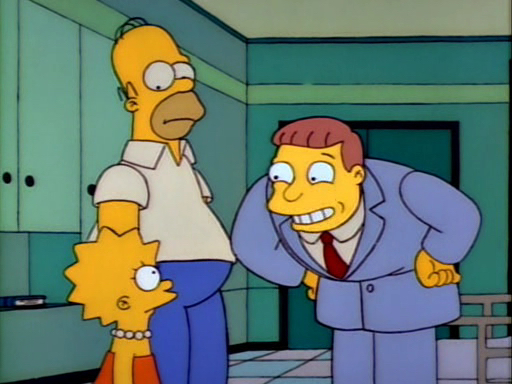 Have you had your fill of – do you still believe – ads that promise you’ll get “up to” some appealing number that almost no one will ever actually get?

Ford is promising just that – step right up! – and the trained seal media repeats the sell as if it were true.

The government, always “concerned,” does nothing to correct it, either.

The Mach-E, which is a four door electric crossover SUV trading on the currency of the not-electric (and two-door) Mustang, was initially touted as being capable of going up to 47 miles on a single 10 minute charge; this has now been revised up to 61 miles . . . neither being the miles the thing will probably go.

Nor the time it will probably take.

In the first place, what is styled “fast” charging is always much slower than refueling –  as in orders of magnitude slower. And it is only partial recharging. 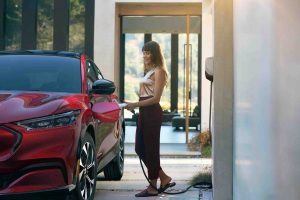 And it may even progress that far . . . if you drive very slowly. Very gradually. If you accelerate normally – as to keep up with traffic – “up to” becomes less than. The same will happen if you jump on the highway and merge with traffic doing 75 – as opposed to sitting in a traffic jam.

An EV’s range is best when it’s stationary.

This is all rather puzzling.

Non-electric cars aren’t allowed to claim how far they might go  . . . if you drive very slowly; if you coast downhill with the clutch in (or the gear selector in neutral). If you avoid uphill driving.

Maximum mileage claims for IC cars are rigorously confirmed by the government, which publishes exact numbers which the manufacturers cannot embellish upward without risking a curb-stomping by the government – and the courts. 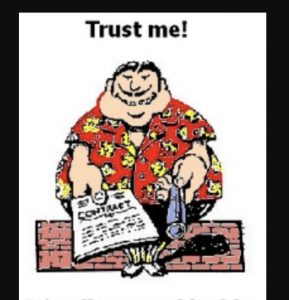 For fraud and deceptive advertising.

Hyundai, for instance, got sued recently for implying in its ads that the non-electric Elantra got better mileage than it actually delivered. The ads didn’t say you’d get “up to” 40 miles-per-gallon, but the ruling amounted to the same thing. The deceptive pitch focused on the Elantra’s 40 MPG highway capability; not its combined mileage reality (an average of city/highway mileage).

EVs aren’t fundamentally; the same rules of entropy apply to them as to any other car. The difference is there are more variables – and less disclosure.

It is teeth-achingly ridiculous to characterize a partial charge – even if takes “only” ten minutes – as being “fast.”

Because it’s a fraction of a charge – which means it’s very slow – because you’ll have to recharge again. Soon.

Gas pumps are all fast. They are also ubiquitous, which is another facet of fast. One doesn’t have to think much about refueling; just pull over whenever you need to.

“Fast” chargers, in contrast, aren’t everywhere. You do have to think about recharging, because of this. And also because of the time you’ll spend there – which may be a lot longer than 10 minutes, if there’s someone ahead of you. Then you will wait for him before you wait for yourself.

You can risk running a non-electric car to practically or actually empty and it’s not a big deal even if you do run out – because gas stations are everywhere and they are all “fast.” You will back on the road less than five minutes even after pushing your car up to the pump.

Or, after a 20 minute walk down the road to the pump and back with a couple gallons of gas. 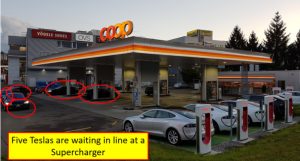 But you can’t bring a can of kilowatt-hours back to your kaput EV. You must get your kaput EV to the “pump.” This means towing it to the “pump” – i.e., the plug – which will take longer than 20 minutes even if the plug is only just down the road.

And then, you’ll wait at least twice as long – 10 minutes – to go a fraction of the distance you could travel in less than 5 minutes if you weren’t driving an EV.

There’s another less than to be aware of,  too.

Because an EV is kaput if you run dry – so to speak – and because it takes so long to un-kaput the EV – its real-world range is even less than “up to” whatever is claimed because of the need to leave a margin of charge at all times – probably at least 10 miles – so as to avoid having to get the EV hauled to the “pump” or being stuck for at least the 10 minutes it will take to recover that partial charge.

Which could easily take 20 – maybe 40 – depending on how many EVs are ahead of you. It might take all day, if no “fast” charger is available.

All of this is true yet you won’t find it touted on the window sticker of any EV.

Why is that? Why are electric cars are given such special dispensation when it comes to advertising how far they might go – and how long it takes to get them going again?

Clearly, the government is pushing EVs in the same manner as those late-night TV infomercials that promise you will lose “up to” 40 pounds in just two weeks.

What does that imply about the government’s motives?

They’re the same any shyster’s.