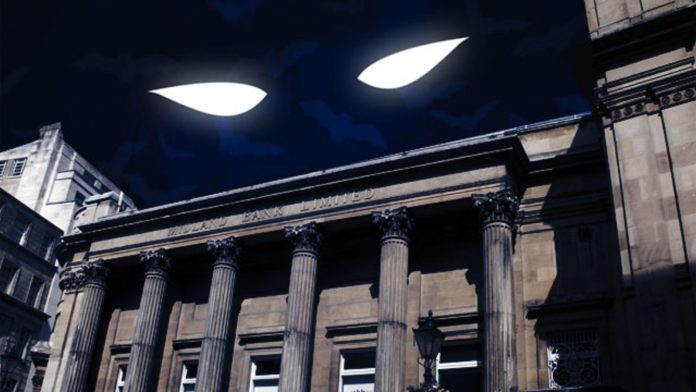 There are many reasons to dislike banks. I’ll give you one.

The other day, I went to cash a check written out to EPautos – which is me. It’s my business account. An extremely supercilious teller – Diapered, of course – droned at me about how she could not cash the check. That I “had to” deposit it my account but could not withdraw the funds. I would have to transfer the funds from my business account to my personal checking account.

Never mind that both are my accounts. There is no “boss” or other person involved in my personal or business accounts. Both are me, myself and I.

Now, this bank had never given me guff before about just cashing a check, whether made out to EPautos or Eric Peters – a difference without a distinction and in addition, what sort of bank doesn’t let the owner of an account cash checks made out to the owner’s account?

I had to argue with this Face Diapered termagant for a good five minutes before she grudgingly gave in and had the gall to lecture me – the owner of the account – that “next time” they would not cash checks made out to my account, which is the same as saying to me.

I considered demanding they cash out both my accounts on the spot – but didn’t because doing that would surely trigger some sort of Hut! Hut! Hut! action, as it is clearly evidence of evil-doing and white supremacy, generally, to withdraw one’s own money from the bank.

And this is why I hate banks.

They regard owners of accounts as pleaders they may deign to deal with, if the pleaders do as they are told. The concept of the customer is as dead as that of probable cause. You will stand in line and do as they say with your money, which they consider theirs. It is like pleading with a parent for one’s allowance.

May I have some of my money, pretty please?

Your business is the government’s business – and banks are the bridge between you and it.

Banks are not custodians of your money. That is incidental. They are monitors of your money – and your activity. Of what you have and what you do with it. This including completely legal actions such as withdrawing money – which above a certain sum triggers “suspicion,” which is sufficient to trigger the Hut! Hut! Hut! – in the from of locking-down or simply seizing your money, it being then up to you to prove (using your own money and your own time) that what you did wasn’t “suspicious” – a term left up to the government to define.

The smart thing to do would be to disassociate completely from banks – in order to regain control over your money. In order to not have to beg to be allowed to withdraw it. In order to be free to use it as you wish without the using creating “suspicion,” leading to a Hut! Hut! Hut!

But this is largely unfeasible, given that without a bank it is very difficult to transact business – even in cash. Because most transactions above the incidental and occasional involve checks, as in paychecks. It’s true, of course, that some payments for services are also in cash, but these are generally of the picking strawberries variety performed by “illegal aliens,” who – irony lost on most freedom lovin’ Americans – enjoy more real freedom that most Americans.

The illegals are free, as a matter of everyday reality, to drive a car without a license or insurance and to get paid in cash and pay no taxes on what they are paid – because there are no meaningful consequences for them.  To suggest they should be applied – as they are applied to Americans (assuming Americans aren’t to be allowed the same freedom) is, of course, extremely racist and white supremacist.

But they are applied to most Americans – because most Americans have a bank account and other things which can be taken away from them at the arbitrary whim of government, often triggered by banks or in collusion with banks. They are not going to resist an order to “lock down” your account – they will gladly help the government and even prompt the government to do it.

And that Diaper-wearing termagant behind the plexiglass has the power, as she wishes to exercise it, to make your life miserable by withholding your money or siccing the government on you for what she regards as “suspicious” activity involving your money.

It’s not going to change the reality of things, but there is a great scene in the largely unknown Chevy Chase movie, Nothing But Trouble. There is a character in the movie who hates bankers – and has just the thing for them.

A Pair of Hut! Hut! Hutters!