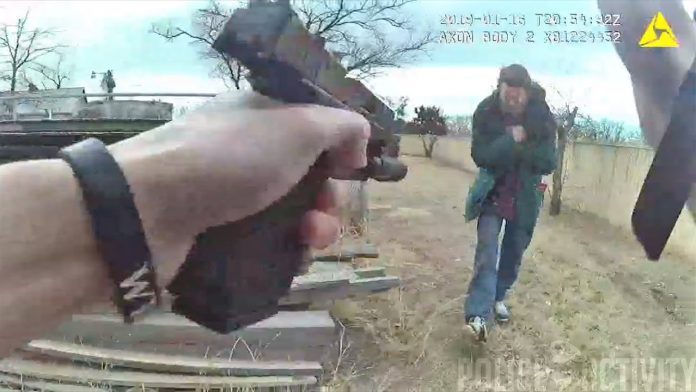 A Colorado armed government worker named Zachary Helbig who shot an unarmed man in cold blood has been acquitted of all charges.

Helbig had been called to the scene of an argument between a man named Shawn Billinger and his ex-girlfriend. When the girlfriend saw Billinger driving past the gas station where the AGW was conducting his “investigation,” she pointed him out to the AGW, who took off in pursuit. He shortly caught up with the man, who tried to run away – but then began walking toward the AGW.

The man can be seen on the AGW’s body cam with both arms flailing and no weapons in either of his hands. The tatted and armed AGW shot him dead from about 20 yards away without even attempting less-lethal alternatives first.

Because he “feared for his safety.”

The corpse is then cuffed – also for the “safety” of the AGW.

It’s worth mentioning that- in most states – an ordinary citizen has an obligation to retreat and may only lawfully resort to deadly force when he is unable to retreat and can substantiate that his life was in imminent danger.

Saying he “feared for his safety” isn’t sufficient. Unless, of course, you’re an armed government worker.

Why are armed government workers – who are supposedly “trained” to be better-able to deal with “threats” to their “safety” held to a lesser standard than ordinary citizens when it comes to the use of deadly force?

This case is so egregious it actually resulted in a criminal charge – of manslaughter.

Helbig “…acted recklessly with respect to his conduct described above and was not justified in the actions he took pursuant to the affirmative defenses of deadly force in the defense of a person and peace officer’s use of deadly physical force,” the indictment said.

Italics added to accentuate the absurdity.

This – all by itself – is sufficient justification.

The jury agreed – and acquitted Helbig.

“What do you expect from law enforcement before they take a life?” Weld County District Attorney Michael Rourke asked – noting that Helbig had “every opportunity to create time and distance” and that his life – or even his “safety” – wasn’t in imminent danger.

“That can’t be the standard in this community,” Rourke went on – by which he meant the “officer safety” standard as the basis for summary execution.

Of course, he’s wrong. Because it is.