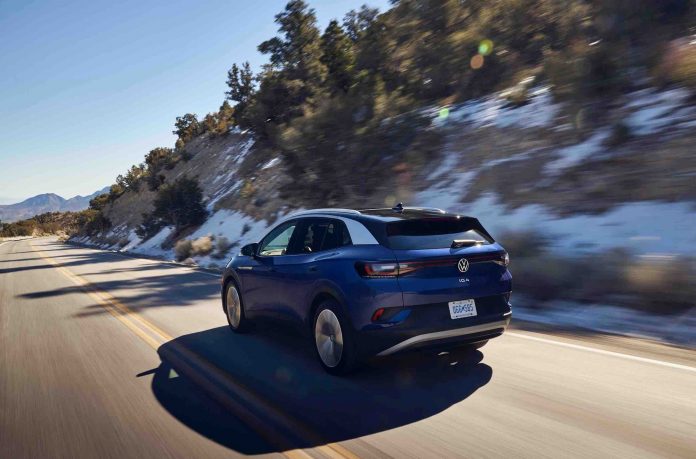 Volkswagen is touting the 260 mile range of its new ID.4 electric crossover, up 10 whole miles from what the EPA had previously estimated.

This means you can travel as far as 130 miles – one way – before you are forced to stop for a long time in order to keep going that way. Or you can turn around and make it home – maybe. At the risk of maybe not quite making it and having to wait for a long time before you can get home again.

Here is what you used to be able to get from VW for $22,460 back in 2015 – which was the year before VWs like the TDI diesel-powered Jetta TDI sedan got in trouble with Uncle:

652 miles before you had to stop for a couple of minutes in order to be back on your way again.

To be fair, that was on the highway.

Only in a world gone loopy could such a reversion and diminution be cause for anything other than embarrassment – and ridicule. But it is of a piece with the bizarro oh, thank you massa eructing from people who have been graciously allowed to walk around again, provided they wear a Face Diaper and provided they don’t stand too close to anyone else. Or the curious, obsequious gratefulness of restaurant owners allowed to open, provided they only serve half the people they used to be able to – while still being obliged to pay all of the rent and taxes, etc.

That goes double-plus-good for for the car press, which in saner times would have ridiculed a car that went half as far and cost twice as much being purveyed as some sort of boon to the car-buying public.

Mind: The ID.4 is not a specialty/high-performance/ultra-luxury car. Such cars are exempt from the usual considerations of practicality and cost. A Corvette is not expected to be a reasonable car because it was never meant to sell in numbers; the whole point as regards a car like the ‘Vette is to be free of the constraints that bind cars that need to be practical and affordable in order to sell in numbers.

That doctrine has been cast to the wind – and not just by VW but by an industry that seems to believe that considerations of practicality and cost no longer matter with regard to EVs.

Even though the whole point with regard to EVs is to sell them to lots of people, else their supposed ability to arrest “climate change” is as pointless as attempting to drain the sea using a sippy straw.

But for a car to sell to lots of people it must be able to take those people where they need to go – wherever that may be – affordably and practically.

Now, apparently, neither attribute matters – when it comes to EVs.

The same mentality that thinks a restaurant can remain viable at half capacity while being obligated to pay 100 percent of the costs seems to believe lots of people are going to be willing to pay almost twice as much to go half as far – and then wait five times as long (at least) to get going again.

There is a common denominator here.

No restaurants or gyms or businesses are operating at half or two-thirds or anything less than full capacity because they want to. They are doing it because they are obliged to, by the force of government.

Similarly, VW is counting on people being forced to buy – more likely, to rent – electric cars like the ID.4, which VW (and the industry, generally) expects to be the only available cars before this decade is out – because of the force of government.

It is the same force, by the way, that is forcing VW to pay for the “free” three years of charging that is included with the purchase/rental of the ID.4 under the auspices of Electrify America, which VW was forced to fund the tune of $2 billion as part of the settlement with the government over VW’s efforts to “cheat” the government – for the sake of its customers.

Government emissions tests – not the ones you have to pass to get your car registered but the ones a car company must pass to get a car certified for sale to the public – had become angels-dancing-on-pinheads stringent, arguably with the intention of making it impossible to certify a diesel engine – at least, not one that was affordable and practical.

VW “cheated” on these tests by encoding software in the car’s computer to adjust how the engine ran during a specific part of the test. The cheating was so trivially minor that the “affected” (as they were styled) cars easily passed the state emissions tests required to get (or renew) vehicle registration in some states and had no meaningful effect on air equality and presented no threat to people’s health – the proof of which is that the government didn’t produce a single actual victim of this “cheating.”

It was a violation of the rules, that’s all – like not wearing a Face Diaper to enter a restaurant (where you’re allowed take it off once you sit down).

VW deserved the public’s support for standing up to “the rules” – by “cheating” the government, for the sake of its customers. But not enough customers rose to VW’s defense – just as not enough people have supported restaurants and businesses that stand up to “the rules” that are putting them out of business.

VW – washed clean of heresy in Room 101 – now casts a gin-teared eye at the Telescreen, feels love for Big Brother and is no longer worried about the people who were its customers.