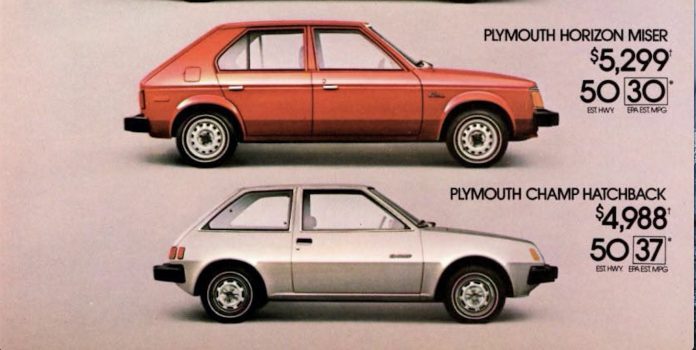 Alternative history scenarios make for great story telling – about what might have been.

What if the Confederacy had not allowed itself to be goaded into “firing the first shot” at Fort Sumter – and thereby made it politically difficult for Lincoln to cast the Confederacy as a physical threat to the Northern states?

We might not now live under a consolidated, centralized, super state with practically unlimited power over every state.

Automotively speaking, what if the consolidated, centralized super state with practically unlimited power hadn’t interfered with car design as it has over the past 40 years? What kinds of cars might have been available? 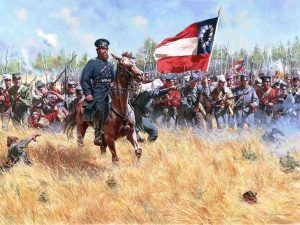 It is possible to extrapolate, based on the kinds of cars that were available 40 years ago, a time when the consolidated, centralized super state with practically unlimited powers barely interfered with car design at all – relative to now.

There were a number of small, lightweight cars that used less gas than today’s small but-not-so-light cars. Among them, the Plymouth Champ, which was a re-badged Mitsubishi Mirage. Either way, this little car achieved 37 MPG in city driving and 50 on the highway – without a computer controlling its engine or electronic injectors delivering its fuel or a modern continuously variable (CVT) automatic transmission.

These are better mileage numbers than the ones posted by modern small but-not-light cars like the new Mitsubishi Mirage, which claims 33 city, 41 highway with the manual transmission; to approach the mileage of the ’80 Champ in a new Mirage – but not equal it – you must buy the extra-cost CVT automatic, which ups the numbers to 36 city and 43 on the highway. 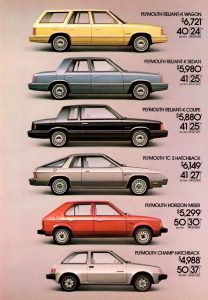 It is interesting to speculate about what the new Mirage’s numbers would be if it were more like the old Mirage/Champ. If it did not weigh about 2,100 pounds – as the new one does – but instead weighed about 1,800 pounds as the old one did. Or – going the other way – if the lighter-weight ’80 Champ had the benefit of computer-controlled electronic fuel injection rather than a mechanical carburetor – and the modern CVT automatic.

As the new one does. 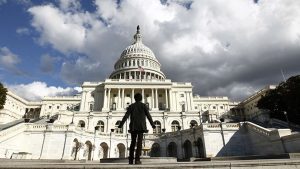 A car like the ’80 Champ would also have probably cost us a third to half as much to buy today, were it not for the consolidated, centralized super state with practically unlimited powers – including the power to serially devalue the buying power of money, by conjuring more of it. 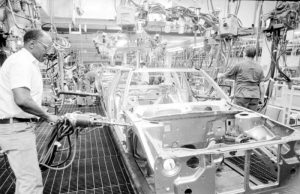 In 1980, robotic assembly was in its teething stages; much of the work of putting cars together and of making the parts that went into making cars was still labor intensive. Much more so than it is today. It cost more – in real terms – to make a car like the ’80 Champ 40 years ago than it does to make a car like the new Mirage, today – which is evident in the pricing of both of them.

Bear in mind that the new Mirage is equipped with numerous standard amenities that were extra-cost luxury amenities back in 1980, such as air conditioning, a 140 watt four speaker stereo, cruise control,power windows and locks. If Mitsubishi can sell a loaded – by 1980 standards – new Mirage for the same price that Mitsubishi (via Plymouth) sold a 1980 Champ without any of that, imagine what Mitsubishi could sell a car like the 1980 Champ for today. 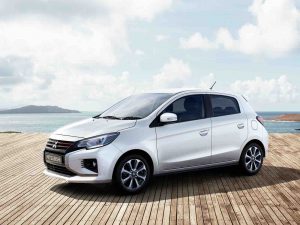 With all of that.

It would almost certainly be much less than $15,295 – assuming a car like the ’80 Champ, with amenities of the new Mirage. In part because it would almost certainly cost much less to make the basic car – the 1980 Champ – today than it cost back in 1980 because of more efficient, less labor-intensive manufacturing, which is the main reason a new Mirage with all those amenities can be sold for essentially the same price that Mitsubishi (via Plymouth) sold the ’80 Champ for, without them.

Now imagine what it would not-cost if it didn’t have to be fitted with six airbags – as the new Mirage has. Plus a back-up camera. Nor “comply” with all of the various “mandates” and “standards” – the cost to be paid for by you.

Were it not for the consolidated, centralized super state with practically unlimited powers.

ABOUT US
Eric started out writing about cars for mainstream media outlets such as The Washington Times, Detroit News and Free Press, Investors Business Daily, The American Spectator, National Review, The Chicago Tribune and Wall Street Journal.
Contact us: Eric Peters ep[email protected]
FOLLOW US
© copyrights by ericpetersautos.com - 2016