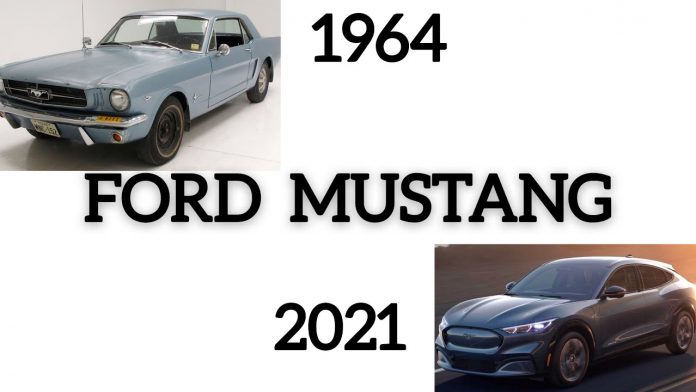 You used to be able to easily tell a Ford from a Chevy from a BMW from a Subaru. Now it’s becoming hard to know whether what you’re talking about has two or four doors. Is – or isn’t – the thing you used to know it was.

What is a “Mustang”?

Until about a year ago – and since 1964 – it meant a very specific thing, unlike any other thing. The first thing of its kind, in fact. 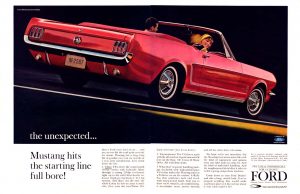 Compact coupe/convertible, with two-doors/four seats and an entirely new look. That first Mustang – like it or hate it – did not look like anything else.

It offered a variety of engine options, too -ranging from grocery-getter six to lusty dragstrip terror V8s. All versions came standard with rear-wheel-drive and without the option to add all-wheel-drive, anathema to the idea.

But what defined it was that it was something all its own and not like some other thing.

The first Mustang became the archetype of this type of car. A category of car it invented.

Others – like Camaro in ’67 and  Challenger in ’70 – emulated. They, too, were pony cars. Similar in type. But not the same things and certainly not Mustangs. To slap the Mustang badge on a Camaro or Challenger would have been regarded as both confusing – and unimaginative. 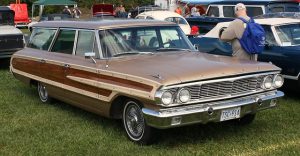 It would have been even more confusing – and also something else – to call a car that wasn’t even a pony car a “Mustang.” Like, say, a Country Squire station wagon. Or, the reverse – calling the Country Squire – a wagon – a Mustang.

That would be like calling a circle a square and expecting people to accept the equivalence.

Or maybe, to get them to accept something else.

Something that isn’t. Using the memories associated with something else.

It is a Mustang in the etymological sense in the same way that a grass-thatched hut with a dirt floor is a “building.” Both are of course structures, but they are very different types of structures. It is sloppy at the least – in terms of facilitating simple communication – to refer to something that isn’t a building as the thing everyone understands the word to mean.

What does Ford mean by calling a five-door crossover SUV without an engine a “Mustang”? Can a mammal be a reptile if we swap words? 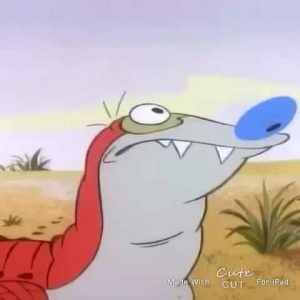 Is an alligator a rabbit if we say it is?

Hey, honey – would you hand me the pliers? When she hands you a screwdriver instead will it do what you wanted the pliers for because she calls it that?

Whether he ought to do so is another question; the same question I direct at Ford.

If the this electric five-door crossover SUV is – as Ford says – a new type of car, why give it an old name? 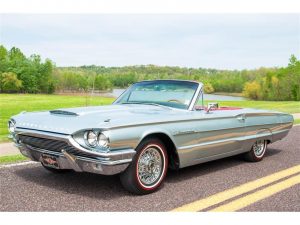 Back in 1964, when the Mustang was a new type of car, Ford didn’t call it “Thunderbird.”

“Thunderbird” was then – as “Mustang” subsequently became – an iconic name. It meant a very specific thing and thus, applying it to a very different thing would have been taken as a sign of laziness as well as an indication of insecurity about the new thing. An obvious – and sad- effort to bask in the reflected glory.

The ’64 Mustang did not need an old name – because it was a new thing. Its own thing. A different thing. It was not a Thunderbird – and the ‘Bird was not a pony or a Mustang, either. There was no mish-mashing or coat-tail riding. The T-Bird stood on its merits and the Mustang did the same, once they were established.

Why can’t the “Mustang” Mach-E? 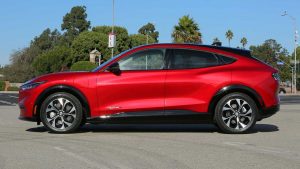 Is Ford afraid it won’t?

One almost feels bad for this thing. It hasn’t even been given the chance to establish its own identity – as the Mustang was given. Even if it succeeds, it will never stand on its own. Instead, it will be subsumed under the name – and history – of a different type of car, muddying the meaning and history of both.

It is like giving up your surname and family heritage and going by someone else’s name – and glomming on to that family’s heritage.

Either you’re ashamed of your own heritage – or you’re afraid you can’t make a name for yourself.

I wonder which it is, as regards the “Mustang” Mach-E?