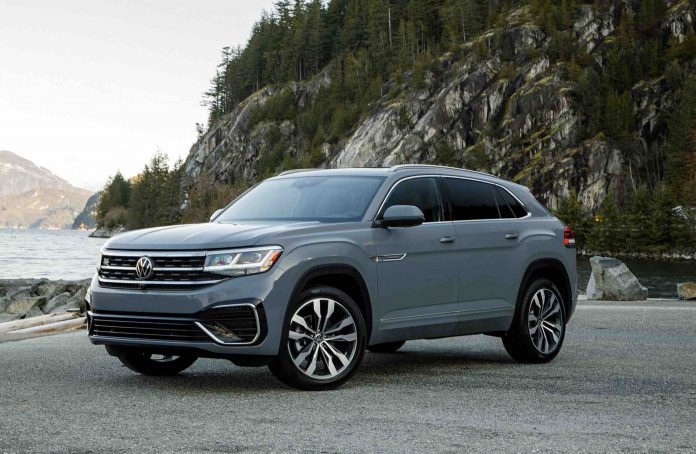 VW made the Atlas because people want big crossovers – with three rows and room for seven. But what if you don’t need something quite that big?

Just not too small? 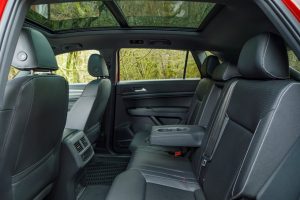 The CrossSport is a slightly smaller, two-row version of the three-row VW Atlas – which is the biggest VW, ever.

It’s also roomier than the Atlas in some ways – on the inside.

It has about three inches more legroom for second row passengers – due to not having space eaten up by a third row.

And it has twice as much room for cargo behind its second row – for the same reason.

It also has the same drivetrain as the three-row Atlas – including an optional V6 engine, which is becoming a rare option, even in large crossovers.

Prices start at $32,775 for the base SE trim with front wheel drive and a 2.0 liter turbocharged engine. VW’s 4Motion all-wheel-drive system can be added as an option, which  boosts the sticker to $34,675.

A CrossSport equipped with the optional 3.6 liter V6, 4Motion AWD and VW’s Technology Package stickers for $40,595. 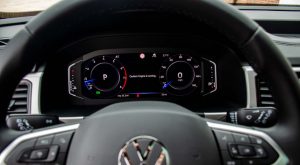 All ’22 CrossSports now come standard with the Digital Cockpit instrument cluster that was previously optional in the higher trims.

A trailer hitch is now standard on models equipped with the V6 and Technology Package – and there’s a new SEL R-Line Black package that centers on black-anodized 20 inch wheels and blackout trim.

The base S trim has been discontinued, which means a price bump from last year’s $30,855-to-start MSRP. 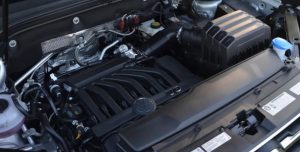 Still available with a V6 – and with or without AWD.

One of the most user-friendly LCD touchscreens you’ll find.

V6 is only slightly stronger than the standard turbocharged four. 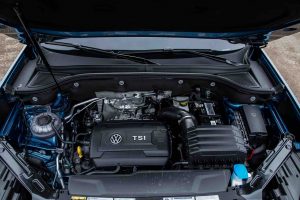 Like the three-row Atlas, the CrossSport comes standard with a 2.0 liter turbocharged four cylinder engine that makes 235 horsepower and 258 ft.-lbs. of torque at 1,600 RPM.

Both engines are paired up with an eight speed automatic and with – or without VW’s 4-Motion all-wheel-drive system. Some of the VW’s rivals – for instance, the Subaru Ascent – come only with turbocharged four cylinder engines and only with AWD.

Or – like the Ford Edge – pair AWD with the optionally available engine.

This VW also has a uniquely sport silhouette relative to other large crossovers in its price range – about which more below.

It’s nice that you can still get one – at all. The CrossSport (and its Atlas three-row brother) are probably the last new VWs that will ever offer them.

Because it is getting hard to offer them.

Interestingly, it’s not so much because they use more gas. The VW’s 3.6 liter V6 uses only negligibly more of it than the standard 2.0 liter four, which is almost half its size – in terms of physical displacement. In terms of CAFE (Corporate Average Fuel Economy) compliance, the V6 hardly affects VW’s “corporate average” at all, so that’s not why it has all-but-disappeared from new VWs, excepting these two. 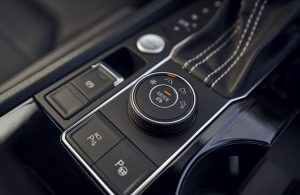 The reason for its dwindling availability has to to with the gas – carbon dioxide – emitted by the V6. Which is a bit more than the four, at least when the four isn’t being force-fed air by its turbocharger, to make up for being almost half the engine, in terms of its displacement. That plus ASS – the Auto-Stop-Start system that shuts off the engine altogether practically every time the VW stop moving, as when waiting at a red light – helps VW comply with regulations and standards decreeing allowable “emissions” of carbon dioxide – the non-reactive gas that plays no role in the formation of smog and doesn’t “pollute” the air but which is asserted to cause “climate change.”

And so it goes – literally.

The turbo four has some advantage, however – for the buyer. It makes almost as much horsepower and torque as the V6 – and produces its peak torque output much sooner, which is why it delivers performance comparable to the V6-equipped version of this VW.

With the turbo 2.0 liter engine, the CrossSport can accelerate to 60 in about 7.2 seconds, which is about the same as the V6-equipped version. It is also stronger feeling in the lower RPM ranges. 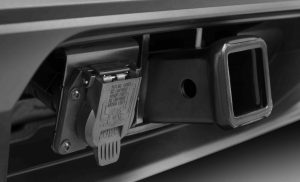 So why even consider the V6?

Two reasons – which may or may not matter to you.

The other reason is one of long-term probabilities. 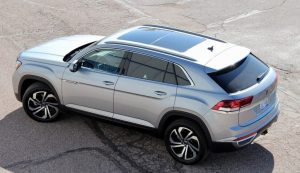 Turbocharging a little engine in a big vehicle means the little engine will be under pressure – literally – for much of its life. This could shorten its life. The V6 doesn’t rely on boost – on pressurization – to deliver the power it makes. Which should mean a longer life and certainly means fewer parts and thus, a decreased risk that something will break or fail over the life of the drivetrain.

There is also a third reason.

Owning a V6-powered vehicle is becoming prestigious, given how rare V6 engines are becoming. That’s worth something its own right – and could be worth more, later – in terms of positively affecting resale/trade-in value down the road. 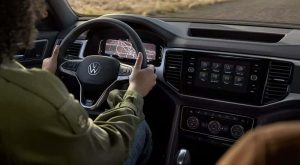 The CrossSport doesn’t feel particularly sporty – relative to the Atlas. Which is to be expected given they’re both essentially the same vehicle, with slightly different proportions.

VW might have tweaked the CrossSport’s drivetrains a bit – for more power or more responsiveness, which is easy enough to do in the age of electronic tuning. A bit more maximum boost for the turbo 2.0, for instance. This same basic engine makes a lot more power (315 hp) in the Golf R and it could probably easily be adjusted to make more power in the CrossSport.

Or, perhaps upgrade the V6 – which surely has the capability to summon more than just 276 hp. 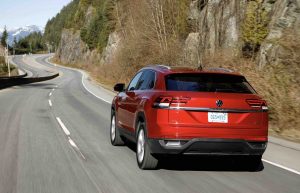 Nope. The CrossSport is the Atlas, less a few inches end to end and with a sleeker/lower roofline. Even the 21 inch wheels with wafer-thin sidewall tires that are available optionally are also also available with the Atlas.

But the CrossSport does have a different vibe.

The same way a red car feels faster than a gray one. The CS looks faster – and the steeper rake of its windshield and lowered roofline make you feel faster, even if you aren’t.

Both versions of this big VW feel commanding.

You view the road ahead over a flat expanse of hood that seems to extend from the yellow dividing line to the white shoulder line. It is very much like driving a big SUV – without the big SUV feel. The CrossSport and the Atlas are more adroit around the curves, less ill-at-ease at high speeds than the typical SUV – the difference between the latter and a crossover being SUVs are generally descended from truck-type platforms and rear-drive-based layouts. For that reason, they tend to be heavier and so more lunky in the curves.

The CrossSport – and Atlas – aren’t.

VW did a great job keeping electronic distractions at bay. The CrossSport’s LCD touchscreen isn’t as “layered” as many others; what you want is mostly right there – such as the audio source, for instance – and much easier to fine-tune than many other systems, which force you to scroll through multiple screens, then are over-sensitive to inputs – or have delayed reactions to inputs.

VW also includes finger-spin rotary knobs you can use, too. 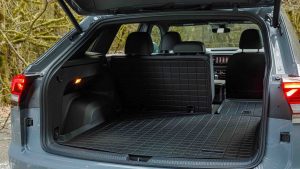 VW was the small car brand – and prospered. The problem – for VW – is that Americans stopped wanting small cars.

Or cars at all, for that matter.

They want crossovers – the bigger, the better.

So VW obliged – and built the biggest VW, ever. Two Beetles could hide in this VW’s shade. There is also about four times as much power under your right foot as in a single classic Beetle – and this VW (when equipped with the V6) could easily pull two or three Beetles down the road. 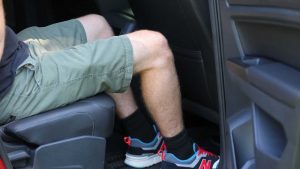 But what makes the CrossSport different from the VW it shares a platform with?

Chiefly, interior spaciousness – which is achieved by getting rid of the space taken up by a third row of seats.This allows second row legroom to be increased by some three inches – to 40.4 inches from 37.6 in the Atlas – and the space behind the second row to double, to 40.3 cubic feet vs. 20.6 cubic feet behind the third row in the Atlas. The latter does have more total cargo capacity – 96.8 cubic feet, if you fold both its second and third rows – vs. 77.8 if you fold the CS’s second row – but the take-home point, if you don’t need the third row, is that the CS has more room for everything except extra people with its rows in place. 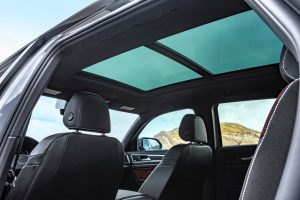 But don’t be dissuaded by that unless you are really tall.

This writer is six feet three inches tall and – even with the panorama sunroof – there was ample clearance between the headliner and my head. This VW’s seats have sufficient vertical adjustment range to accommodate a man my height, which means it can accommodate almost anyone else.

The now-standard Digital Cockpit main gauge cluster will appeal to people who like the configurability such displays offer; you can toggle through a wide range of available information – including navigation information – and also change the look to suit.

What’s intriguing about VW’s decision to make this formerly high-end-only feature standard – as a number of other manufacturers have done – is that it further erodes any meaningful distinction between a “people’s car” – and a luxury-brand car. 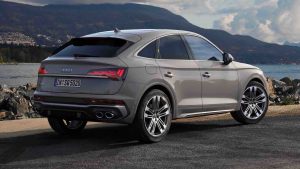 This will become apparent if you cross-shop this VW against the luxury-branded Audi Q5 Sportback – which is a similar (though smaller) crossover with a starting price ($47,800) that is nearly $20k higher than the VW’s and yet – by the numbers and the amenities – what are you getting for that extra almost-$20k?

The Audi comes standard – and only – with a 2.0 liter turbocharged four that’s a close cousin of the VW’s four and only slightly stronger (and not any stronger than the VW’s available V6, an engine that isn’t available in the Audi).

It – the Audi – used to stand apart from the VW, which did not come standard with the Virtual Cockpit digital display that is optional in the Audi. 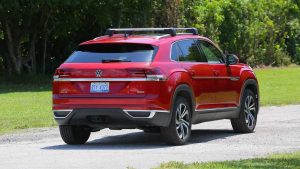 But now, essentially the same thing is standard in the VW – in a larger, roomier vehicle with as much or more engine.

Just not the badge.

If you need the room – just not the extra row – this VW may be right-sized, for you.