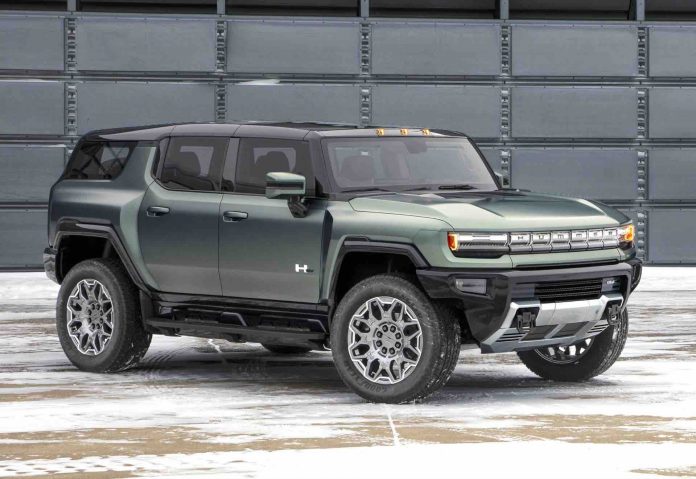 About twelve years separate the last Hummer GM built and the new one GM is about to begin selling.

How much has changed over that time?

Perhaps the better question is – how much has improved?

The price, as it turns out, is about the same – then vs. now. The 2009 Hummer H2 – which is the model of original Hummer most dimensionally similar to the one about to come out – stickered for $63,090 to start.

That’s $82,933 in 2021 Biden Bucks – which is almost exactly as much as GMC, which is the arm of GM that will sell the electric Hum Job – says it will eventually charge for the latter. 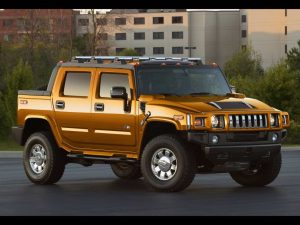 Which – as it turns out – is what GM used to charge for the original (H1) Hummer that was basically a civilianized version of the military Humvee rather than a rebodied version of the Chevy Tahoe/Suburban, as the H2 was.

Anyhow, buyers won’t be paying any less for this new Hum Job – which is accurate, etymologically, since that is the sound made by electric motors. There will be no rumble from a big V8 burning gas (H2) or diesel (H1).

Which means it will be much will be less than it was, in an intangible but no-less-important-for-being-so reason.

A humming 4×4 is kind of like a tiger that meows – even if it can still bite. It’s an unnatural juxtaposition, the sound of one hand clapping.

The old Hummers were of course excoriated for their consumptive habits, but this new Hum Job is more of an energy guzzler than the old models guzzled gas (and diesel). It takes a tremendous amount of energy to power an 800 volt battery pack that weighs almost as much as a small car, itself – plus three massive electric motors – the combo generating a combined output of 1,000-plus horsepower.

Lots of volts to juice that up. 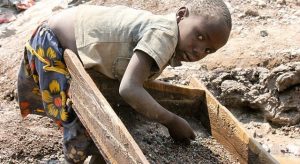 Where does that juice come from? How is it made?

It is not made by windmills – or Chinese-made solar panels. These are insufficient to generate that much power. Unless Mr. Fusions are drone-dropped to every household with an EV, the electricity will have to be generated – probably by burning something – and then transmitted via infrastructure that doesn’t exist, which will cost a fortune to bring into existence.

The power demands imposed will be staggering.

And staggeringly unnecessary – to use the charge of gratuitous consumption leveled at the old Hummer. Three seconds to 60 in a 10,000-plus pound electric SUV is impressive. It is also grossly wasteful, since no one “needs” (to use their verbiage, again) to get to 60 in 3 seconds. 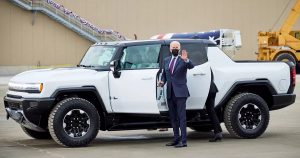 And unlike last time, the costs of this need are generally imposed.

The owner of an old Hummer H2 bought his own gas; he didn’t make you pay for it. Everyone will pay for the cost of powering the 1,000-plus pounds of “Ultium” battery within the new Hum Job. They will pay more in taxes, to subsidize the new “infrastructure” needed to power it.

And they will likely pay more for their utilities, to offset the need to build the additionally necessary generating capacity being hogged by these grossly, gratuitously wasteful electric Hum Jobs.

Oh, yes. They’ll also pay more in other taxes – such as those that are devoted to pay for he roads that 10,000-plus pound EVs like the Hum Job (that’s nearly tree times as heavy as a medium-sized non-electric car) will wear out faster, if enough of them are out there pounding them to rubble.

How much oil is used to make those 20-inch knobby off-road tires, by the way? Which will also wear out faster – requiring replacement sooner, using more oil to make them  . . . on account of all that weight-load they’re bearing.

There is also the hidden – from Americans – cost of children hand-clawing the necessary raw materials for batteries out of pit mines in the Congo and the Earth-rape associated with the other necessary battery precursors – all of that need at least doubled by doubling the size of batteries and motors over what would be necessary to get from A to B reasonably.

This is or ought to be a topic of conversation.

But hold on, now! In addition to being quicker than a Corvette, the Hum Job is also able to crab walk sideways and go places no Corvette can go! 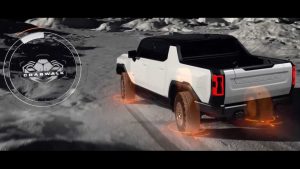 Yes, but how far can it go?

GM claims an “estimated” range of 329 miles – that “estimate” hinging, almost certainly, on not driving the 10,400 pound Hum Job to 60 in 3 seconds. Or even six. Which requires a lot of energy that – once used – will no longer be available to just keep the Hum Job moving.

The claimed “estimate” is also likely predicated on mostly city (i.e., low-speed, with much stop-and-go) driving rather than high-speed highway driving, which – given the Hum Job’s hideous aerodynamics – is likely to be much less unless you slow down.

On 32 gallons of gas, it had a highway range of more than 500 miles. That’s almost as far as a Prius hybrid can go.

Even in city driving – where heavy non-electric cars get their worst mileage on account of the gas engine burning even when the vehicle isn’t moving and also because gas engines are less efficient at stop-and-go speeds than at highway speeds – the ’09 H2 could still go farther – about 350 miles – than the Hum Job can go, period.

Most people do not live near “off road” – and there aren’t many (if any) “fast” chargers off-road, either. If “off road” is 100 miles away, when you get there, you have already eaten up a third of your “estimated” range.

If it turns out to be actually half, you’d better turn back. 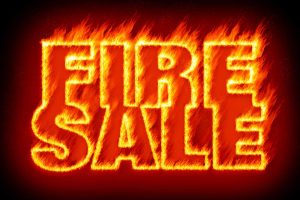 Which wasn’t a time hog.

Also, by gassing it to full you didn’t risk a fire or reduce the thing’s service life – two of the “features” that attend “fast charging” the Hum Job – and every other battery-powered appliance.

But never mind. It’s “cool.” Look at it crab walk!

Tell it to the kid clawing cobalt from the side of a pit mine in the Congo.