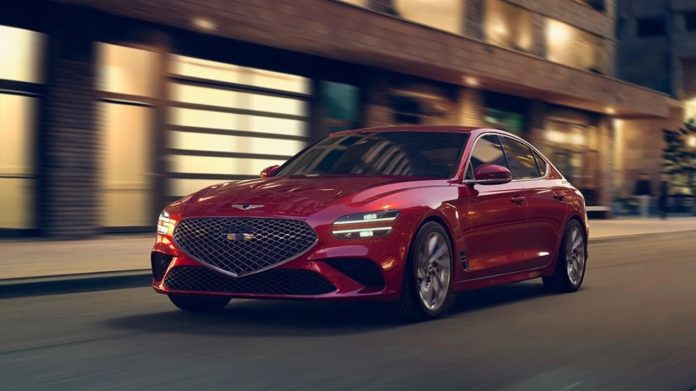 In the 2020s, it’s Genesis – Hyundai’s luxury car line – that is using the same strategy   . . to snatch away market share from Lexus.

And the others, too. 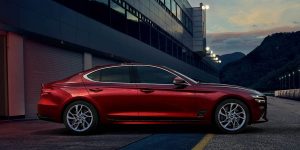 The G70 is a compact-sized luxury sport sedan that competes with rivals like the Lexus IS, Audi A4 and BMW 3 Series, among others.

And for significantly less than rivals charge.

Prices start $37,775 for the base 2.0T trim, which comes standard with a turbocharged 252 horsepower 2.0 liter engine paired with an eight speed automatic transmission and rear-wheel drive. All-wheel-drive is available as a stand-alone option; so equipped the price rises to $39,875. 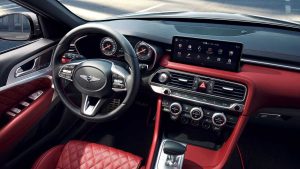 A top-of-the-line 3.3T Launch Edition comes with a 3.3 liter turbocharged V6 that makes 365 horsepower, also paired with an eight speed automatic. The rear-drive version stickers for $52,750. 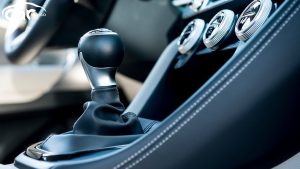 The 2022 G70 gets an exterior and interior styling refresh – but loses its formerly available manual transmission. Last year’s G70 was the only remaining luxury sport sedan that offered  one (with the base 2.0 engine).

There is also a new/updated 10.25 inch display at the top of the center stack.

More car (and engine) for less money than rivals in the class.

Among the most athletic cars in the class, irrespective of money.

Easy-to-use without having to look knobs and buttons for AC, stereo, seat heaters and other accessories.

No more option to shift gears yourself.

“Hands on” semi-automated driving technology sounds a lot like ice cream you’re not supposed to eat. 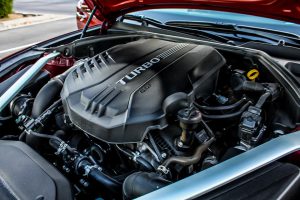 The G70 offers just about the strongest engine lineup in the class.

As its name suggests, the 2.0T trim comes standard with a turbocharged 2.0 liter four cylinder engine that’s similar – in terms of its size – to the 2.0 liter engines that are standard in most of the others in this class, including the BMW 3 Series, the Audi A4 and the Lexus IS300.

The difference is the power-for-your-dollar that comes standard in the G. 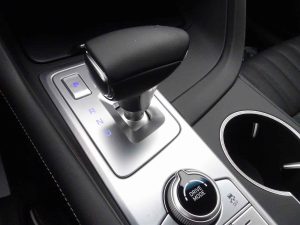 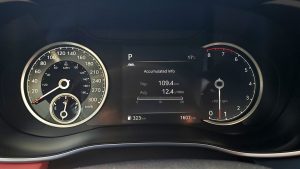 Equipped with its standard 2.0 liter, 252 horsepower engine, the rear-drive version of the G70 takes about six seconds to get to 60. The slightly heavier AWD-equipped version takes slightly longer. To get to 60 much more quickly, the 3.3T is your ticket to ride. This one does the same run in 4.9 seconds, ranking it as just about the quickest car in the class. A BMW M340i is quicker (zero to 60 in a searing 4.1 seconds) but it’ll cost you $12,350 more to shave that eight-tenths-of-a-second off the time.

One area where this Genesis comes up a little short is range. Both of its engines are pretty thirsty – 17 city, 24 highway for the V6 – which seems even thirstier than that on account of the car’s 15.8 gallon gas tank. In city driving, you’ll drain it dry in about 268 miles.

Less, if you’re enjoying yourself. 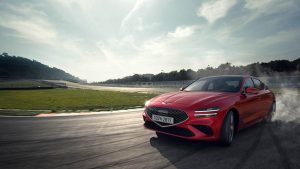 The others in this class have similarly small-capacity tanks but they generally average about 5 miles-per-gallon better than the G70, which gives them a significant range advantage.

But they do make you pay for it.

The G may cost you a little more in terms of how often you have to stop for gas. But it’s arguably a small price to pay for all the fun you’ll have in-between. 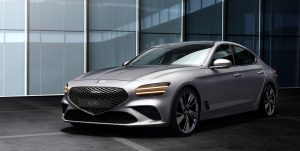 The G70 is not a Dad Bod car. This one’s as cut and ready for a ten-mile run as a Navy SEAL. Especially the Launch Edition, which looks even slinkier in its matte-finish paint job, hunkered down on 19-inch lightweight-alloy wheels, massive red-powder-coated brake calipers visible through the spokes.

Turn off the traction control (yes, you’re allowed), use your left foot to hold the brakes while easing into the fun pedal with your right. Feel the rear end squat and then slide left a little as the brawny engine overcomes the ability of the brakes to prevent the tires from spinning. Let them grease the road for a bit and then release the brakes and let her rip!

The limited slip diff straightens you out as the scenery blurs. 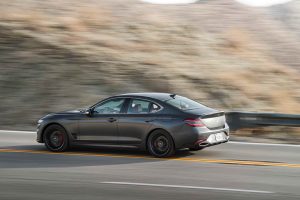 If you put the drive selector in Sport+ mode, each firm upshift of the eight-speed automatic at redline is accompanied by a pleasant eruption of combustion from the Variable Valve exhaust system. Genesis assumes that if you buy a car like the G70, you’d like to hear it.

Though each one is equipped with all the very latest saaaaaaaaaafety and “advanced driver assistance” systems – including an available semi-autonomous (the car kinda-sorta drives itself) system – all of them can be turned off, so you can enjoy.

Which is a function of your being in control.

The G70 doesn’t parent you. Its designers presume you don’t need parenting. There’s even a drift mode for AWD-equipped versions.

There is something bizarre about sport sedans (we won’t mention any names) that constantly pre-empt and parent the person who is trying to drive them. It is like buying a gun that won’t let you shoot. To paraphrase Jefe from the classic movie, Three Amigos – the G70 is a driver’s car. The kind of car that some of the other cars in this class no longer are.

But it’s a shame about the no-more-manual. The presence of a clutch in a sport sedan is becoming almost as rare as a new car with optional air bags. And the reason for that is essentially the same.

Uncle – as in, the federal government.

Uncle forced air bags into every new car, whether the people buying them wanted them or not. And Uncle is forcing the manual transmission out of every new car, by hurling regulatory fatwas requiring all new cars to meet ever-higher mileage standards and ever-lower “emissions” standards (in air-fingers quotes to make note of the fact that all new cars “emit” hardly anything that’s harmful to anything). Automatics are taking over because they can be programmed to shift just so, for the best-possible score on government tests.

And that’s why you’re no longer allowed to shift for yourself. 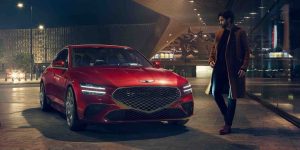 The term refers to the way controls are laid out – their accessibility and ease-of-use. The G70’s ergonomics are superior to most of its rivals in that unlike them, Genesis didn’t convert every (or even most) of the G’s controls and displays to smartphone-emulating tap/swipe displays.

There is an analog speedometer in the main gauge cluster – rather than a digital display. There are large, easy-to-use rotary knobs for adjusting the air conditioning/heater and fan speed. Buttons you can touch by feel – without having to look (or stabilize your finger before you tap) for the seat heaters and other important accessories. And none of it looks a bit less “modern” than the mostly smartphone-emulating flatscreens used in many rivals. If anything, it looks better – and will look better longer. 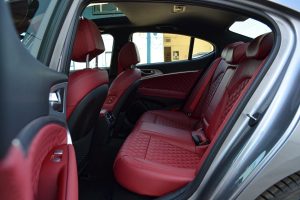 Today’s “latest thing” electronic tap/swipe display is likely to look cheesy five years from now because the shelf-life hipness of electronic displays and interfaces is brief.

A chronograph-watch-emulating speedometer, on the other hand, always looks classy. At some point, it is likely that high-end cars will return to that look – once smartphone-emulating touchscreen displays become standard in the humblest economy cars (and we’re very close to that, already).

Yes, the back seat is tight (34.8 inches of legroom) and the trunk is small (10.5 cubic feet). But the same is true of the others in the class. Luxury-sport sedans aren’t supposed to be practical.

They are supposed to be enjoyable.

The G is very. 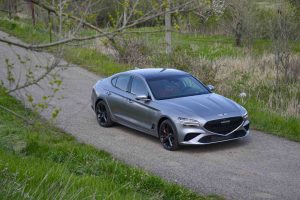 Genesis offers what is styled “hands-on” semi-autonomous driving technology as optional equipment in the G. When engaged, the car keeps itself centered in its travel lane and will slow itself down if the car ahead of you does. You’re supposed to keep your hands on the wheel, of course – and your attention on the road/conditions. But it seems at cross-purposes to expect that while at the same time arguably encouraging drivers not to. This is a general problem with “autonomous” technology – in that it isn’t, really. Unless a car can be completely trusted to drive itself – without the driver needing to be ready to drive – then it’s probably better if the driver did drive.

It’s sad about the no-more-manual, but that doesn’t mean the G has lost its yarbles.