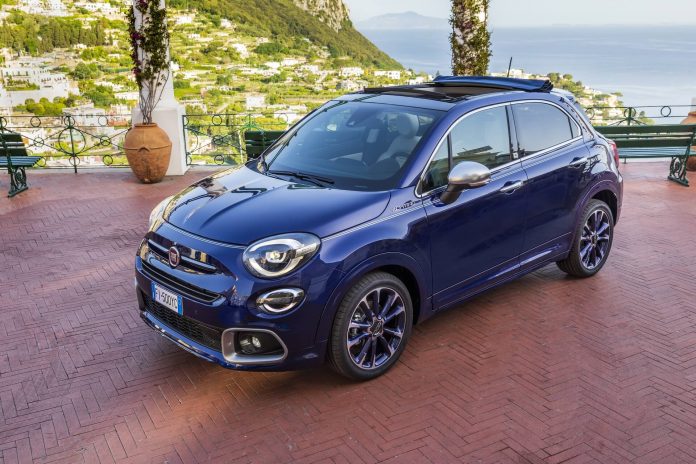 Can a car company continue to be a car company when it has only one car in its inventory? That is the current situation with Fiat – which no longer sells the 500 coupe, the slightly larger 500L wagon or the 124 Spider sports car, either.

That leaves the 500X as the last new Fiat.

Is it enough to keep Fiat in business? 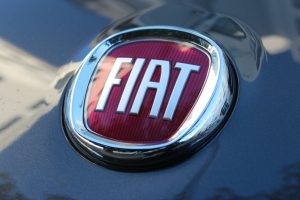 The 500X is also one of the smallest crossovers still on the market – even though it was the largest Fiat on the market – before Fiat took its other models off the market. It is just over 167 inches long, end-to-end, which makes it about a foot-and-half shorter, end-to-end, than a small sedan such as a Honda Civic.

But it has much more room, inside, than a small sedan like the Civic – at least, for cargo. This being the thing which makes small crossovers (and crossovers, generally) so popular.

The 500X is also available as the Jeep Renegade, if you prefer a different appearance – and pricing structure. Fiat-Chrysler (and Jeep) – which is now Stellantis – used the Fiat as the basis for the Jeep and both are for that reason nearly identical under their skins, sharing the same drivetrains but not the same skins. 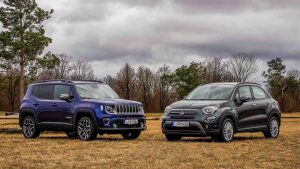 The 500X – which comes standard with AWD as well as a 1.3 liter turbocharged four cylinder engine and a nine-speed automatic transmission – stickers for $27,300 to start. The Jeep-skinned more-or-less-the-same-thing stickers for $24,195 with the same engine and transmission – but with front-wheel-drive. The same all-wheel-drive system is available in the Jeep; if selected, the MSRP rises to $25,095. The Jeep is also available with a more aggressive AWD system with a “crawl” mode that replicates the gear-reduction capability of a 4WD system’s two-speed transfer case.

The Fiat doesn’t offer that because it’s not meant to duplicate that.

While the Jeep focuses on being more rugged-looking and actually rugged in function, the Fiat emphasizes the dolce vita – via luxury touches such as the Yacht Capri trim’s folding-back targa roof and ambient mood lighting built into the headliner. 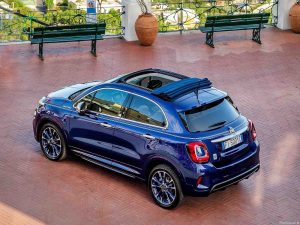 Other than a minor shuffling of trims/options/packages, the last Fiat soldiers on essentially the same as it was last year.

Lots of room for its size.

More power than you might expect, given the size of its engine.

You can buy the same thing, under the skin, for substantially less – in Jeep skin.

That little engine is under a lot of pressure. 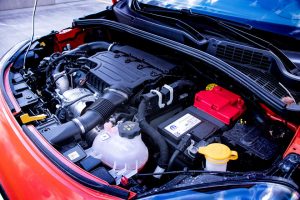 Every 500X comes with the same drivetrain – a 1.3 liter turbocharged four cylinder engine that makes 177 horsepower, paired up with a nine speed automatic transmission and a light-duty all-wheel-drive system that (like most such systems) normally routes most of the power to the front wheels, automatically routing some to the rear when the front wheels lose traction.

So that none break traction.

The Fiat’s engine is the smallest four cylinder engine on the market right now. It’s about the same size as some three cylinder engines, such as the one that’s optional in the Buick Encore GX – another small crossover that’s a possible cross-shop for this crossover.

But it makes substantially more horsepower. The Buick’s 1.3 liter three only manages 155 horsepower – a 22 horsepower difference. 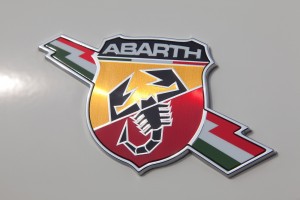 Probably chiefly because the Fiat’s engine is a slightly larger version of the engine that powered the 500 Abarth, which was the high-performance version of the 500, Fiat’s smallest (and now-discontinued) car. It was heavily turbocharged, in order to squeeze out the horsepower of a much larger engine.

And it is the same here.

Thirty-nine pounds per square inch of boost. That is a lot of boost. A lot of squeeze. To put it in some context, most modern cars with turbocharged engines operate in the12-19 psi range; a few high-performance models squeeze harder- but not many. 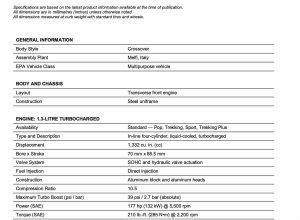 And they are high-performance models.

Therein lies what may prove to be the rub here – eventually. That much cylinder pressure puts a lot of pressure on the piston rings that maintain cylinder pressure; on the bearing surfaces that are smaller in such a small engine.

It’s a lot to ask of such a small engine.

Arguably, a vehicle like this little runabout would have been better-served by a larger engine that didn’t need so much squeeze to produce acceptable horsepower. Such an engine was available – in the Jeep-skinned version of this thing – as recently as the 2021 model year. It – the Jeep Renegade – came standard with a 2.4 liter four cylinder engine that made more horsepower (180) without needing any squeeze, at all.

But Jeep dropped the 2.4 liter engine for this year, leaving only the 1.3 liter engine – the same engine as used in the 500X. 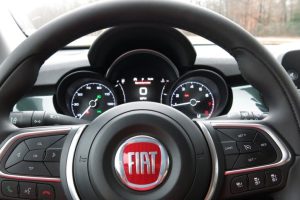 As to why – given that the 2.4 engine was stronger, with fewer parts and much less pressure – the only answer that accounts for it is the bigger engine’s slightly higher fuel consumption. On paper, the difference seems immaterial. The 500X with the smaller 1.3 liter engine/AWD combo rates 24 city, 30 on the highway. Last year’s Jeep with th larger 2.4 liter engine and AWD rated 21 city, 29 highway – a difference of about 3 MPG overall.

But it’s small difference that makes a big difference when it comes to dealing with federal fuel efficiency edicts, which punish any car company that doesn’t “comply” with them, even if the difference is only a little bit. It’s no small thing when fines are applied – for non-compliance – that must be transferred to the buyer of small vehicles like this Fiat (or that Jeep) because profit margins on small vehicles such as these are already a tight squeeze. Anything that makes a given model cost more than a rival that’s otherwise similar but costs less – because it “complies” while its rival didn’t – is like the kiss on the lips given by Michael Corleone to his brother Fredo. 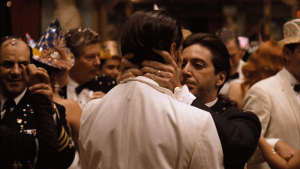 As in, the kiss of death.

So that’s why engines are getting smaller – ultimately, to the point of nonexistence. So as to replace them with motors, which don’t have to worry about complying with federal fatwas pertaining to how much gas they are allowed to consume – or “emit.” Though of course, once engines have been eliminated, it will be discovered motors do “emit.” Just indirectly. Regardless, the same insistence upon compliance will re-assert itself, so as to get us out of cars, period.

All that boost makes another difference – in low-end torque. This little engine summons 210 ft.-lbs., a big number for just 1.3 liters. The much bigger 2.4 liter engine that used to be available in the Jeep-skinned version of this thing only managed 175 ft.-lbs. and not until it was spinning almost twice as fast (3,900 RPM vs. 2,200 RPM).

That’s a difference you can feel, in two ways. The obvious way being in the small of your back, as the boost comes on and the torque multiplies. The other – less obvious – way is in your foot, which doesn’t have to press down as much or as hard to call up that first feeling. The two feelings make this little crossover feel especially good in stop-and-go, city-suburban traffic scenarios, where it doesn’t feel like it’s working hard – even though it is under a lot of pressure. 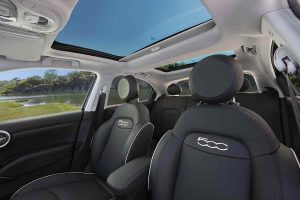 Even though it’s big – for a Fiat – it is a very small vehicle in comparison with almost every other vehicle out there. If you don’t feel intimidated by that, you can take advantage of that. The 500’s length being several feet less than the typical medium-large crossovers and SUVs that dominate the roads today lets you exploit gaps in traffic closed to them – and slip into parking spots they can’t fit into, either.

The car’s short wheelbase might ordinarily make for a darty-feeling thing, especially at high speeds, on the highway. But though it’s small, it’s not light. Would you believe 3,305 pounds? 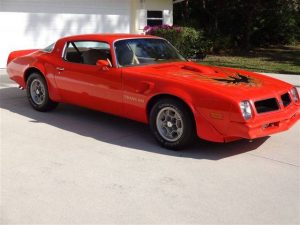 This being only about 400 pounds shy of the curb weight of a ’70s-era V8 muscle car such as this writer’s infamous 1976 Pontiac Trans Am. It’s why this little-engined, little thing only manages 30 MPG – best case – on the highway. But it’s also why it feels hunkered to the road, despite its small size and short wheelbase.

Because it is hunkered.

Kind of like the way you’d be, too, if you strapped a pair of 45 pound Olympic plates to your back and went for a walk. 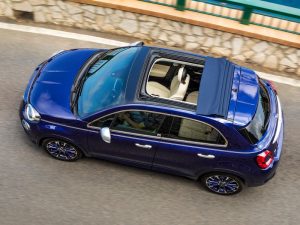 Even though it is related to the Jeep Renegade (or rather, even though the Jeep renegade was spawned by it – so to speak) the Fiat looks enough not like the Jeep such that few people are aware of the relationship.

One looks like a box with another box on top. The other looks like the antitheses of that. Practically every exterior surface is rounded and smoothed. This form does affect function in that headroom in the Fiat is considerably less than in the Jeep – in the back, where second row occupants only have 37.8 inches of it in the Fiat vs. 40.5 in the Jeep. 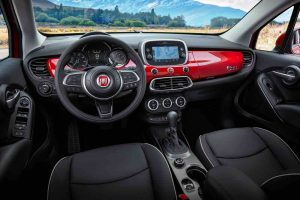 Interestingly – given the Fiat doesn’t emphasize rough-weather/off-pavement capabilities as much as its Jeep-skinned cousin does – the 500 has substantially more ground clearance (7.9 inches vs. 6.7). Yet it sits much lower – visually – because it’s only 63.7 inches tall vs. 66.5 for the Renegade. 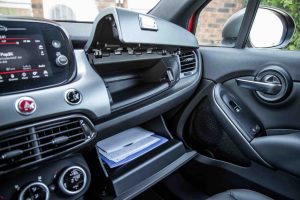 But it hasn’t got the cheery two-tone/body-colored-matching interior trim palettes that come standard in the Fiat, which also comes standard with several very handy design features such as a double-decker glovebox and unusual features such unusual-for-crossovers features, such as the available folding-cloth sunroof – which you can’t get in the Jeep-skinned iteration of this thing.

Some may not like the small – for a 2022 model year vehicle – LCD display at the top of the center stack. Others will be relieved to find it’s so small – and will appreciate the so-2015 rotary knob controls for adjusting temperature and airflow. 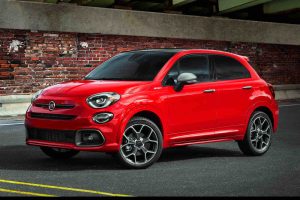 Surprisingly, this little rig can pull more than you’d probably guess. It boasts a standard 2,000 pound maximum tow rating, which means it can easily pull a 1,500 pound trailer with plenty of safety margin.

Many vehicles this small (and some that are larger) aren’t rated to pull anything at all.

And as far as badges: Don’t worry so much about Fiat’s disappearing – even if it does – because Fiat isn’t going away (it’s a major brand in Europe) and it’s also part of the Stellantis automotive combine that encompasses Jeep as well as Dodge and Chrysler and Ram – so as long they don’t disappear finding parts and service shouldn’t be a problem.

This may be your last chance to own an Italian Job that an average American can still afford.