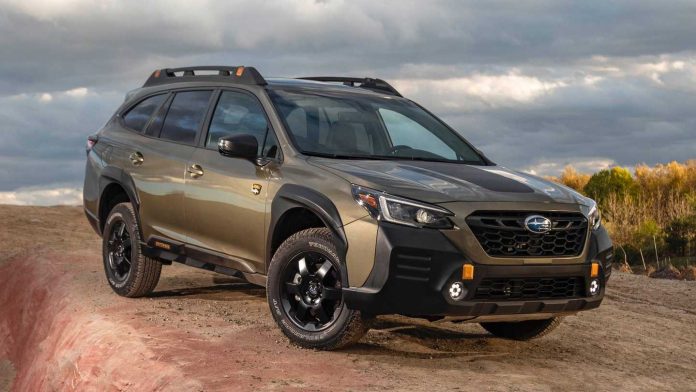 In the limbo under, it’s how low can you go.

In the Subaru Forester Wilderness, it’s how high can you go?

This new iteration of Subaru’s popular crossover wagon has as much clearance – 9.2 inches – as some 4WD SUVs and trucks.

The Forester a compact sized crossover – of which there are many, including similar-sized models like the Honda CR-V, Toyota RAV4, Mazda Cx-5 and Nissan Rogue. It is the only crossover in the class that offers as much airspace between its underthings and the pavement. Or dirt. Or snow.

Which accounts for why it is more likely to keep moving when the others get stuck. 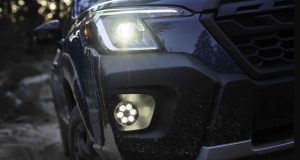 It is also the only small crossover with a standard boxer engine – a type of engine that’s also a flat engine. The layout lowers the Soobie’s center of gravity. The weight of the engine being equally distributed on either side of its centerline also increases its stability.

This makes it somethings the others aren’t – which helps it stand out from all those others.

Prices start at $25,395 for the base trim – which includes all-wheel-drive. In many other crossovers, it’s available – optionally.

The new Wilderness trim – which stickers for $33,020 – also comes standard with 9.2 inches of ground clearance (8.7 inches in other models) as well as five wheels – including a full-size spare with a full-size tire on it, not a “temporary use only” donut spare or a useless (if the sidewall is damaged) tire-inflator kit, as many others come standard with. 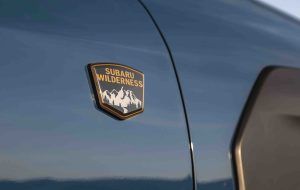 The Wilderness trim is the newest form of Forester, meant to make this already capable all-weather (and off-road-capable) crossover even more so.

Much more capability than other crossovers.

Attractive base price given what’s included, especially the standard AWD.

Others in the class – such as the Mazda CX-5 and the Nissan Rogue – offer stronger engines.

All trims come standard with the same engine – and transmission.

Other trims have half the rated towing capacity of the Wilderness trim. 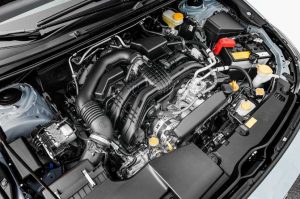 This is mostly a good thing. 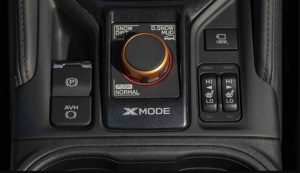 So the turbo’d alternatives don’t give you much in return for the turbocharging – which increases the load on the engine as well as parts bolted to the engine. This could increase costs – on you – at some point in the future, when the engine needs new parts, such as a new turbo.

Or maybe even a new engine.

The Mazda CX-5 is probably the closest shave for the Soobie in that it, too, comes standard with a non-turbo’d 2.5 liter engine – that makes 187 horsepower. Which can be boosted – if you like – to as much as 256 horsepower, via the optionally available turbocharged version of this engine. 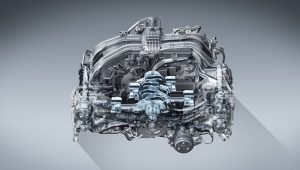 However, the Soobie’s engine is the only boxer engine of the bunch. To find another crossover that offers this type of engine, you’d need to head on over to your local Porsche store – and that’ll cost you about twice what you’d pay to get the same type of engine in a Forester.

A boxer engine is called that because its cylinders aren’t lined up in the usual row or in a “v” configuration, standing upright or mostly so. Instead, they are laid flat and with each cylinder opposing another on the other side of the crankshaft, back and forth. This layout was made famous by VW – in the original Beetle – and of course, by Porsche. It allows for a compact, low-mounted engine that is also naturally balanced and for that reason is lighter than the in-line/upright equivalents. All of these factors aid in balance and handling as well as giving the car a unique growly sound that establishes emotional separation between one so equipped and the rest. 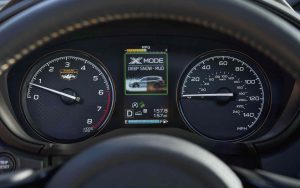 Another point of separation – from most of the rest – is that Soobie comes standard with AWD.

Mazda’s CX-5 comes closest, again. This rival also comes standard with AWD and its base price of $25,900 is only a few hundred bucks higher than the base price of the Subaru. But if you like the idea of a boxer engine under the hood, the Soobie is priceless. 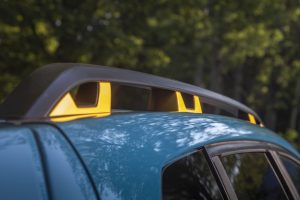 Most small crossovers aren’t rated to pull very much but the Forester can pull more than most  . . . if you buy the new Wilderness trim.

It carries a 3,000 lb. maximum tow rating. This is twice the standard tow rating and twice the maximum-rated capacity of rivals like the CR-V and Rogue, which both max out at 1,500 lbs.

It’s more about where you can go off-road.

Also, whether to risk the road when it’s underneath half a foot of freshly dumped snow. That’s what this Soobie is all about – especially the new Wilderness iteration, which has 9.2 inches of clearance, enough to leave several inches of clearance between that half-a-foot of snow on the road and the underside of this intrepid little crossover.

Which is fitted just the right shoes for such work, too. Seventeen inch Geolandar all-terrain tires grab the terrain at all four corners.

They do something else, too. 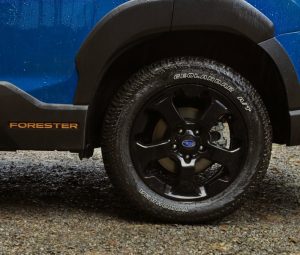 These tall sidewall tires – 225/60s – are meant to give and flex with terrain – and because of that, they also ride soft on the road. This gives  the Wilderness what would once have been described as a luxury car ride. Today, luxury-sport cars have short-sidewall tires that are very stiff for that reason and for just that reason ride like the sporty luxury cars they are.

It’s weird – and welcome – to find out just how luxurious-riding this Subaru is.

Drive it on a bad road and see for yourself. Hit a deep pothole on one of what’s left of America’s roads and see how how little you feel it. Drive it on an unpaved, washed-out gravel road and the Soobie’s civility will astound even more. It is one of the most pleasantly capable vehicles I’ve driven in years. 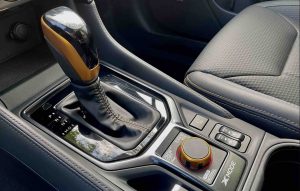 There’s not much reserve on tap to execute a quick, high-speed pass around a Clover Conga led by a car doing not much speed at all, say 48 in a 55. You’ll need precious time to build enough speed to make it around one such in time. If there are two or three of them ahead of you, the difficulty waxes.

The engine has adequate power for everything else.

A manual would let you make the most of what’s available but it’s not available. This is also true in the class, generally. Some of the competition does offer more power but it comes with a turbo – and everything else that comes with that. 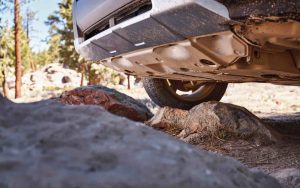 Driving the Soobie is a more engaging experience in that you must learn to depend on your ability to gauge time-distance relationships and make fullest use of the car’s available gumption. This can be fun in a way that driving a car with more-than-adequate power isn’t because you’re more challenged, as a driver. 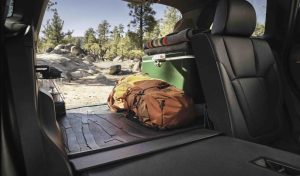 Like other crossovers in the segment, the Forester is all about making the most of the space you’ve got. Which is a lot given that it’s about the same size – well, the same overall length – as a typical compact-size sedan, something like a Honda Civic. But in spite of being only 182.7 inches long (a Civic sedan is 184 inches long) it has about twice as much space for cargo (28.9 cubic feet) as the Civic does (14.8 cubic feet) and that’s without counting how much more space you have available if you drop the Soobie’s rear seats. This expands the total space available to 74.2 cubic feet – about five times the space for cargo vs. a same-size small sedan such as the Civic. 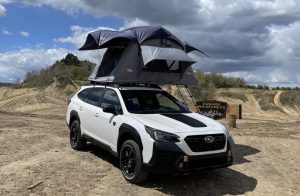 Unlike other crossovers, the Forester doesn’t look like them – if you get the new Wilderness version. The knobby (and raised white letter, if you like) tires alone make it look unlike the others, on account of the unusually tall sidewalls and the amount of air gap between the tires and the wheelwells.

It almost looks lifted – and in fact, it is.

Other versions of the Forester have 8.7 inches of clearance – still more than most other crossovers. But the Wilderness kicks that up to 9.2 and that’s a difference you can see, especially with those tires. 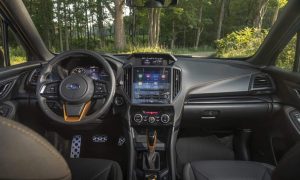 Wilderness iterations of the Forester also get rubber-armor around the wheelwells and front and rear lower bumper areas, which of course are the areas most likely to get scuffed – if they were painted. Inside, the seats are armored against water; if you get wet, the seats won’t soak it up.

If you dinna like – and dinna want – a flatscreen gauge cluster  you will like this Subaru’s still analog speedometer and tach; similarly, the refreshingly physical gear selector and adjuster knobs for the AC and heater.

There is even a CD slot.

There’s an LCD touchscreen, too – but it’s peripheral, as these things ought to be. You do not need to tap/swipe to change radio stations (or turn on the seat heaters) while driving. This makes the Subaru a safer to drive car – as opposed to using technology such as Lane Keep Assist to correct for people too busy tapping and swiping while driving. 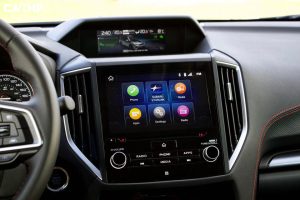 The Forester – all trims – comes standard with Lane Keep Assist, as well as a number of other electronic “assistance” systems, all of which can thankfully be turned off. If you need such “assistance,” you’re probably not paying attention

These systems – unlike ASS – remain off, once you’ve turned them off. It is not necessary to turn them off every time you start the car if you don’t want them on.

You can’t get rear seat heaters in the Wilderness – an option that’s offered only with the Forester Touring (which is also available with a gesture control interface that let you operate the climate controls without actually touching any controls). But the Wilderness is the only Forester trim that comes standard with a real spare tire, which can be just as handy on road as off. 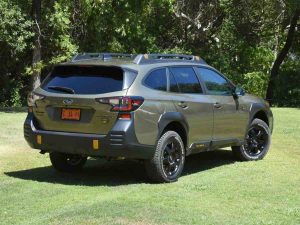 The tire inflator/repair kits that many new vehicles come with are great if you run over a nail but useless if you blow out a sidewall as by popping a curb or hitting a really bad pothole.

Cost was mentioned earlier – and it’s quantifiable in more than just dollars and cents. The as-it-comes $25k-ish Forester offers poor weather/unpaved roads capability that approaches that of 4WD trucks and SUVs – for thousands less than most of them cost. Not counting the cost of feeding a truck or SUV in these Let’s Go Brandon! days. 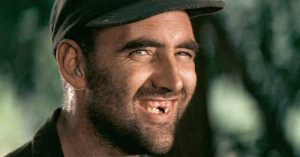 The luxury-car ride quality of the Wilderness trim is hard to put a price on – considering how hard that is to find, even in luxury-priced cars.

Subaru touts the higher capability of the new Forester Wilderness, which it has. But the inside skinny is that it comes with more civility, too.

As the toothless man said once, why don’t you try it and see?