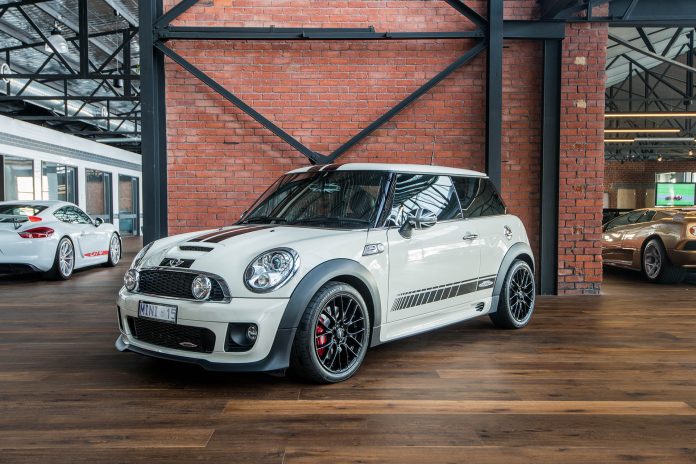 Small, economical cars may soon be in vogue again – for the same reasons they used to be in vogue. Money’s tight – and things cost more. 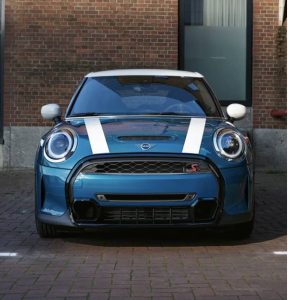 The Mini Cooper is the smallest new car available in the U.S. – as well as one of the most affordable, with a base price of $23,400 for the hardtop coupe (which seats five). A slightly larger version with four doors is also available, with a starting price of $24,400.

This one is still two feet shorter, end to end, than a compact-sized car like the current Honda Civic.

But it’s big on charm – and easy on gas.

The Mini hasn’t changed much since 2014, but that’s not a bad thing if you like what the Mini is – and what it resurrected. That being the original ‘60s Mini concept of lots of fun in a small package that’s surprisingly big on the inside. 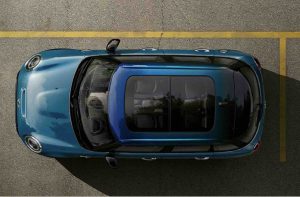 In addition to that sameness, there’s also some newness – in the form of a new-design front grille, a standard digital main gauge cluster and new multi-color (and multi-tone) paint combinations that enable the buyer to almost custom-order their Mini’s outward appearance.

Saves you money on gas – without costing you fun.

One of the  few new cars you can buy that still comes standard with a manual transmission.

Two and four-door bodystyles – and both have more room inside than many much larger cars.

Small (11.6 gallon) gas tank makes the Mini seem thirstier than it is.

Small – relative to the size of just about everything else. You may feel like a mouse scurrying around among elephants. 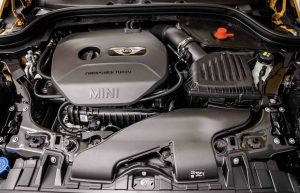 The two and four-door Minis are available with your pick of three different engines, all of them driving the front wheels only. Standard equipment is a turbocharged 1.5 liter three cylinder engine (one of the smallest engines available in a new car) that makes 134 horsepower and 162 ft.-lbs. of torque. It’s paired up with a standard six speed manual transmission or – optionally – a seven speed automatic.

Interestingly, there is almost no difference in gas mileage regardless of transmission choice. With the manual, the Mini rates 27 city, 37 highway; with the seven speed automatic, it’s virtually the same: 28 city, 37 highway. Either way, these are big numbers, a function of the car – and its engine – being small.

They’d be better, though, if the car were less heavy. 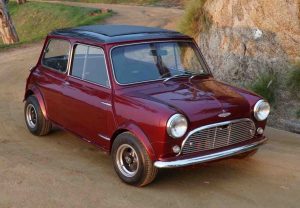 The two-door Cooper weighs in at a surprisingly hefty 2,712 lbs. – which is only slightly less heavy than the significantly bigger Honda Civic sedan mentioned earlier, which weighs 2,877 lbs. It manages 31 city and 40 on the highway – about the same mileage as the much smaller (and smaller-engined) but just-about-as-heavy Mini.

But why is the Mini as heavy as it is – for its size?

Probably because of its size.

If that sounds paradoxical, it’s only because you may not appreciate the effect of government “safety” regulations on curb weight. Specifically those pertaining to crash-testing. In order for a tiny car like the Mini – which has almost no car ahead of its front wheels or behind its rear wheels – to pass these tests, additional structure is needed behind those abbreviated overhangs and these add the weight you can’t see from the outside. It makes the Mini more crumple-resistant if you run into something – or if something runs into you – but it also makes it less fuel-efficient than it could otherwise have been. 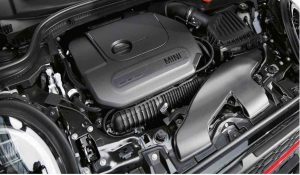 It is hard to know exactly how much more efficient it could have been without somehow lopping off the 1,173 pounds or so of curb weight that separate the modern Mini from the original Mini of the ‘60s – which weighed just 1,539 lbs. – but it is probable it’d be more efficient than the Civic sedan, so probably close to 50 MPG on the highway.

And that’d be a really big inducement to buy such a small car – even if the risk of crumpling up in the event something ran into it were higher. “Safety” is a value. But it’s not the only value. Especially when it’s a hypothetical vs. an actual value. You may never run into anything – or have someone run into you. But you will pay for every drop of gas the car uses. 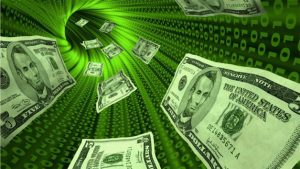 A larger – stronger – turbocharged 2.0 liter engine is available in the S versions of the Mini. This one makes 189 horsepower and 206 ft.-lbs. of torque (at just 1,350 RPM). The same transmission choices are available. It also uses a bit more gas – but only a bit: 23 city, 33 highway.

The big bite – as regards both engines – is their wanting of premium unleaded, which adds bigly into the cost of driving a Mini. The good news is that you don’t have to use premium; it won’t hurt the engine to fill the tank with less costly regular. But it will hurt power output/performance – as the Mini’s computer will dial back the turbo boost if it senses lower-octane fuel. 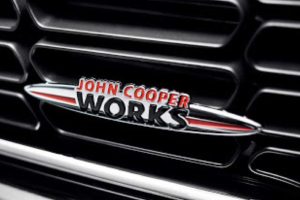 If this seems paradoxical, it’s probably because you’re unaware that Mini is actually a BMW – a premium brand. And the Mini uses engines designed by BMW and shared with BMW models. People who buy BMWs are by definition affluent people and such people are less worried about the cost of fuel than people who aren’t. 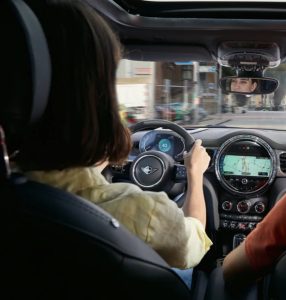 Driving a small car can be big fun.

In a small car, you can exploit those small gaps in traffic that larger cars can’t. You can slip past the left lane hog who is almost pacing the car to his right, but left just enough space for a small car to dart through the opening – and get around both. You can also park in spots larger cars can’t; some that only motorcycles can. And when you park in your garage, there is still space in your garage.

The Mini also connects you to the drive as closely as a car can without being a motorcycle. You’re close to the road, even more so than a bike, because of how low the Mini sits. Ahead of you is the road – because there’s very little hood.

But there is also not much wheelbase – the distance between the front and rear axle centerlines. Just 98.2 inches. The wheelbase of a compact sedan such as the Honda Civic mentioned earlier is 107.7 inches, nearly a foot longer. 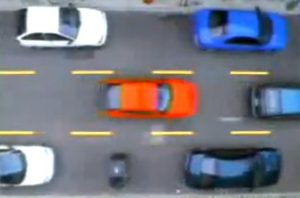 What does it mean?

The Mini is quicker to react to directional changes – because the rear wheels follow so closely behind the front wheels. The car also has an extremely tight turning circle (just 35.4 feet – about a foot tighter than the Civic’s). It is a highly maneuverable little skateboard, ideal for busy traffic and perfect for having fun in it. But it’s also more apt to come around on you in the curves, if you don’t keep your foot on the gas. The rear end is close – and light. When the weight shifts – as when lifting off the gas in the middle of a curve you went into too fast – it can swap places with the front end.

So be sure to keep on the gas in those curves, if you take them fast.

The ride is also skateboard-like, as you’d expect. This isn’t a deficit; it just comes along for the ride. 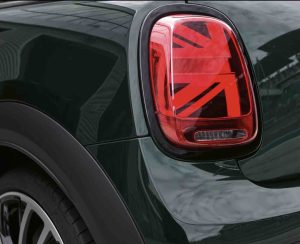 And there is that shifter – if you want it – as opposed to a gear selector.

Ten – five – years ago, being able to shift for yourself would not have been especially remarkable. You could get a manual in sedans like the Honda Accord and Toyota Camry, both automatic-only now. Even the Corvette is automatic-only now. Yes, the automatic’s shifts are quicker and more consistent. You never miss a shift when the selector is in Drive. But the action of shifting gears – and more than just that, of operating the clutch in syncopation with your shifting – is an intangible reward that cannot be quantified by cold numbers alone.

The manual in the Mini makes it a more engaging car to drive – because you literally are, in a way that you cannot be when all the engagement you’ve got is to put it in Drive and push down on the gas. 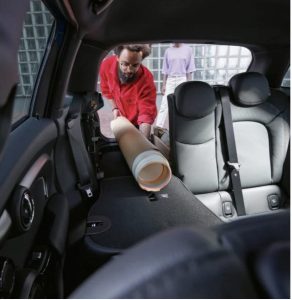 The Mini is . . . mini. Whether two or four doors, it is so abbreviated in length you look at it and think it might fit in your pocket. And – naturally – you then wonder what (if anything) will fit inside it.

It turns out to be a lot more than you might think.

The two-door version is just 152.2 inches long, end to end. Yet it has 41.4 inches of legroom for the driver and front seat passenger as well as 34 cubic feet of space if you make use of the available space by folding the back seats forward. This is a lot of space for a car this small. To convey some sense of how much space, consider that a Civic sedan-sized car only has 14.8 cubic feet of total cargo space.

Even with its back seats in use, the Mini’s still got 8.7 cubic feet of space behind them – which is about twice as much space for stuff as in the Mazda Miata, a two-seater sports car that is also a couple of inches longer than the Mini. 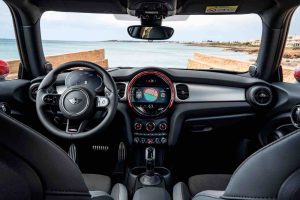 The two-door Mini’s back seats – which it has – are a little tight, having just 30.8 inches of legroom. But this is more legroom – again – than in many other much larger, allegedly four-seater two-door sporty cars like the Chevy Camaro, for instance (which only has about 26 inches of rearseat legroom) and the Ford Mustang, too (which has 29 inches and is three feet longer).

The Mini is also taller.

It only stands 55.7  inches off the pavement. But its roof doesn’t slant and its windshield is more upright – and that allows for more headroom in this little car than in many much larger cars: 40.3 inches up front and a functionally viable 36.9 inches for the back-seaters.

To convey some sense of that, there are only 34.8 inches of headroom in the backseat of a Mustang. There’s even less (33.5 inches) in the back of a Camaro. 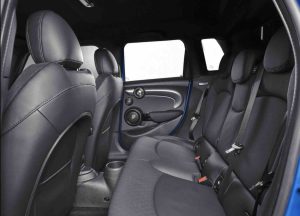 The long and short being that the Mini is more practical than you might think at first glance. This includes having the option to choose the four door, which increases both access as well as backseat legroom, which increases to 32.3 inches.

But while these numbers – and choices – are important, they are not what makes the Mini.

There is no other car that resembles it – except another Mini. And each Mini can be customized with factory and dealer options such as to make each one more individual than other cars, as well as other Minis.

The new/standard digital dash is very modern but the toggle switch controls for many functions are happily retro – and uncommon. This way of turning things off and on is intuitive and satisfying in a way that tapping/swiping isn’t. 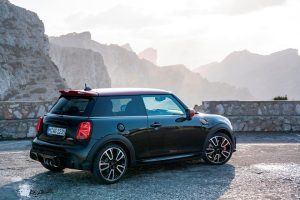 One thing that’s missing – due to its Mini-ness – is a spare tire. It would take up too much space. So – instead – there’s a tire-repair/inflator kit. This is fine – and works – provided you haven’t got a sidewall tear. If you do, then you’re stuck!

Small is beautiful, especially when it’s also practical – and affordable. Both to buy and to drive.