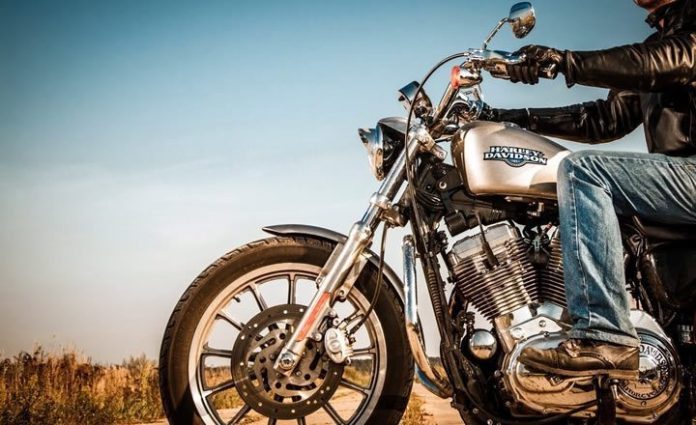 Lots of interest in motorcycles now – for practical reasons. They are a way of dealing with the doubling of the price of gas – by doubling or even tripling your gas mileage. Some smaller bikes with engines in the 250 cc range average 90-100 miles-per-gallon. Few bikes – regardless of engine size – average less than 40. Italics to emphasize the point that it’s 40 MPG not just on the highway (as some cars tout) but on average.

Some – like my Honda Silvering, which is a medium-sized (and engined) bike – average about 60. That means a little less than five gallons of gas – which is about a tankful for the Honda – costs about $25. Which is about what it used to cost to just-about fill up the 15 gallon tank of my old pick-up truck – which doesn’t average 60 or even 40 MPG. 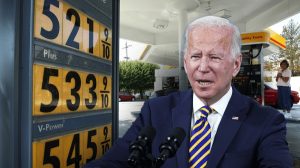 So lately, I’ve been riding the bike a lot. You might consider riding rather than driving, too.

But if you haven’t already got a bike – or know a lot about them – there are some things to consider besides how little gas they use. One of these being which type of bike – or rather, which type of cooling – is best.

The truth is, neither is.

But there are differences. Pros – and cons – to each way of controlling and shedding heat that may be of interest, so let’s have a look at some of them.

Also, access to the engine is usually much better  . . . because there’s no radiator in the way and no hoses to work around. This makes it easier to do basic service and also to clean the engine. 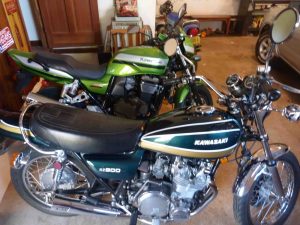 Faster warm-ups. An air-cooled engine will reach operating temperature faster, which is a boon if it’s an older bike with carburetors rather than fuel injection. A cold carbureted (and water-cooled) engine will often need more time on the choke before it settles down to a stable idle and the bike is ready to ride.

The sound. Air-cooled engines are more mechanical-sounding because the sounds of the valvetrain and reciprocating assembly (pistons going up and down, etc.) aren’t muffled by water jackets. The castings (block and heads) are usually thinner for that reason – and also so as to dissipate heat, which there’s no water to do.

Less power is probably the main downside of air-cooling.

The more power an engine makes, the more heat it makes. This heat has to be regulated and dissipated in order for the engine to not overheat. It is harder to do this with fins and airflow over them, which – along with oil (and, sometimes, oil coolers) is how air-cooled engines regulate and dissipate heat. But they do run hotter – and it is harder to cool them, the more powerful they are. This is why most sport bike engines making more than about 100 horsepower are water-cooled. 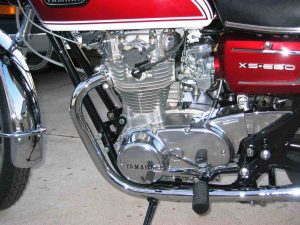 It is also why, if you modify an air-cooled engine to make more power, you will want to consider adding an oil cooler, if the bike’s engine hasn’t already got one – to increase the capacity of the engine to dissipate the additional hear it will make. You will also want to be careful about prolonged idling – as in heavy traffic – of such an engine on a very hot day – when there’s very little air flowing over the engine.

Fins. Most air-cooled engines have fins cast into them to cool them. The engine’s heat migrates outward to these fins, over and through which cooling air flows, taking away the heat. They are simple – no moving parts – and look neat – but can be Hell to keep clean. Which is important to do and not just for looks, because as grease and dirt accumulate in between the fins, cooling efficiency goes down and the hotter the engine will run. But getting at all those nooks and crannies – and getting out all the grease and grime – can be a lot of work.

The main one is power. A water-cooled engine can make more of that because it has an additional medium to transfer heat.

Both air and water-cooled engines rely on oil for both lubrication and heat dissipation. But water-cooled bikes add . . . water (well, a mix of water and ethylene glycol) to the mix. This greatly increases the capacity to carry away and dissipate the heat produced by the engine in the process of producing power. There are not many air-cooled motorcycle engines that made even 100 horsepower. My ’70s-era Kawasaki 900 was the most powerful bike of its era and its engine produced about 82 horsepower. Modern sport bikes with engines in the same “liter” class routinely boast in excess of 120 horsepower and some of the bigger ones close to 200. 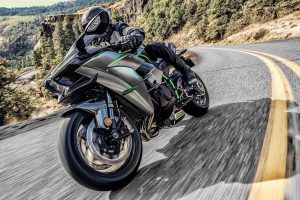 A water-cooled engine not only runs cooler it also runs a more consistent temperature. It is possible to regulate the engine’s operating temp using the thermostat and fan to maintain the same temperature, by increasing (or decreasing) the cooling. This is why you won’t see a water-cooled bike’s temp gauge ranging much, once the engine is warmed up – assuming the cooling system is operating properly.

No fins. Some water-cooled bike engines do have vestigial fins cast into the heads – chiefly for aesthetics (see that part above about looking good) and maybe a little for supplementary cooling. But they are not as deep (usually) and not as many and so it is much easier to keep the engine clean, which looks good. 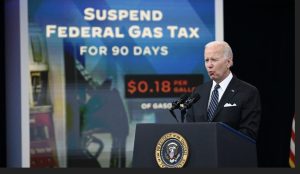 We’ve already gone over the main ones – which are the same ones described under air-cooled pros, except in reverse. Water-cooled engines are more complex, having more parts – and are usually harder to work on, because some of those parts are in the way of getting your hands (and tools) on the engine. You will also have the possibility of overheating caused by leaking – or because a thermostat got stuck or a water pump failed. You’ll be doing more maintenance to prevent such problems from happening.

Regardless of which form of engine-cooling you decide works best for you, one thing that’s for sure is you’ll be paying a third to half as much for gas when you ride rather than drive.

Plus, you’ll be riding rather than driving.

It’s a two-fer that’s also a good way to stick it to the Biden Thing. Flip him the bird as you fly by.

Classic Cars and The Smog Police