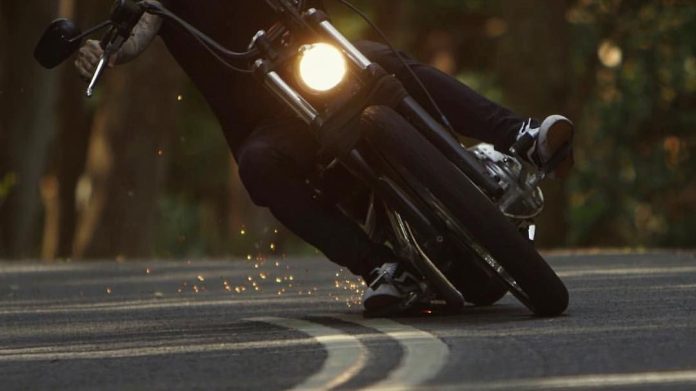 There is a saying about horses for courses. It means: Don’t take a Cyldesdale to the Kentucky Derby. Nonetheless, it’s sometimes fun to do just that.

My ’83 Honda GL650 Silverwing isn’t a Clydesdale – but it’s not exactly a sport bike, either. But I sometimes like to ride it as if it were. It’s fun to get that thing hard over in the curves, sometimes enough to scrape the underthings – which produces a nice trail of sparks. 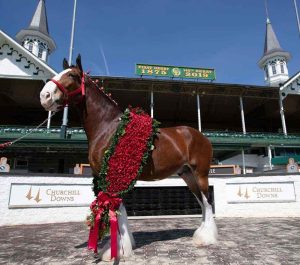 This happens sometimes, when you’re having fun.

It was less fun when I got home and discovered I could’t get the kickstand down, necessary to hold the bike up. I found out – after leaning the bike against a tree, to hold it up – so I could get off – that the kickstand was still there. It just couldn’t be kicked, because it had retreated up into the frame of the bike, behind the exhaust pipe. There had been a tab welded to the kickstand which prevented it from tucking up behind the pipe and which was also meant to be used to extend the kickstand, via the rider’s left foot.

But it wasn’t there anymore, because my having fun had scraped it off. More precisely, had stressed the welds that held it in place and it had snapped off, somewhere along the way. The result being a bike without a kickstand – kind of like some smaller dirt bikes – except my ‘Wing weighs about 500 pounds (relatively light for a faired touring bike with hard bags) which makes it hard to pick up if you just lay it down.

You can’t just pick up new kickstands for 40-year-old bikes down at NAPA, either. Especially weird 40-year-old bikes like this ’83 Honda, which was only sold here for one year. The good news is, there’s eBay – a kind of online Shamballa for owners of weird old bikes (and cars) where the light always shines because it’s almost always possible to find a replacement used part for the part you broke. And so it was. I found – and bought – a replacement used kick stand that had the necessary tab still welded to it.

But in the meanwhile – until it got here – what to do? Well, one could always just not ride the bike until it got fixed but that is not my thing. So I tossed a welding glove in the storage box behind the passenger seat, so that my girlfriend – who enjoys this sort of fun – could get off the bike when we stopped, get the glove – and pull the kickstand down for me, without burning her fingers on the hot exhaust pipe in the process.

This is an accessory Honda never thought to offer.

About a week later, the new used kickstand arrived and I went out to the garage to do the swap, which ought to have taken no more than ten minutes as there is literally just one 12 mm bolt to remove, which attaches the kickstand to the bike’s frame. But – as I quickly discovered – that bolt was going to take a whole lot longer to remove because there was maybe half an inch of room between the head of that bolt and the exhaust pipe. Not enough room to back out the bolt.

The exhaust had to come off. Not just the pipe on that side, either. The whole thing had to come off – or at least, partially lowered – because it is all connected. The two pipes – one for each of the “twisted twin’s” cylinders – feed a common plenum that just happens to be located in exactly the spot that makes removing the kickstand impossible, without getting that plenum and the pipes (plural) out of the way.

Normally, this is not a technically challenging job. Just a PITAS job. But this is a 40-year-old bike and the exhaust is original and also 40 years old. It is not improbable that something might break in the course of attempted removal. That gave me pause, because if it did, it might cost me a lot more than the $25 I paid for the replacement used kickstand, this being a one-year-only machine with an exhaust specific to that one year (the kickstand is the same on the whole series of GLs, including the smaller-engined 500 as well as the related CX series).

I could have rigged and welded a new tab onto the original kickstand, but the tab is unusually shaped, in order to align with the side exhaust pipe – and I hesitated to add to the junkyard dog look of the bike.

Then, inspiration! Why not just cut the tab off the new-used kickstand and weld it to the old/original? No having to touch the exhaust system and risk damaging it. So that’s what I did, except instead of welding with a torch – which I shied away from doing on this 40-year-old bike with slightly leaky carbs – I used the mechanics’s best friend, next to Duct Tape. 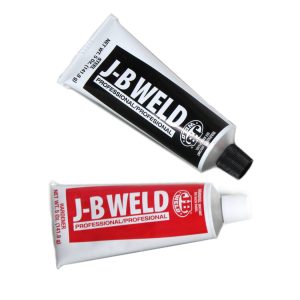 Just a dab’ll do ya!

I drilled out two holes for the tab, in the same location as the original mounting points, inserted the end prongs of the new/used tab I’d cut off the new/used kickstand and then JB Welded the works. After letting it dry overnight, I gave the repair a coat of semi-gloss paint and it all looks new again.

And now Dawn can put away her welding gloves.

This is what passes for fun on two wheels, for the freaks who enjoy this sort of thing. We certainly do – and maybe you do, too!