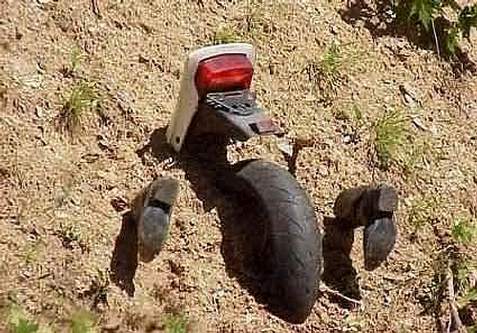 Just as there was a sweet spot for cars – a moment in time when they were just modern enough to start perfectly every time, never stall, last almost forever and rarely require more than routine maintenance but were not yet over-laden with expensive electronics that rendered them economic throw-aways when those electronics began to crap out – there is also a sweet spot for motorcycles.

And the good news is, it’s closer in time to right now – so there are still plenty of them left (and at reasonable prices).

With cars, the sweet spot was – roughly – the early-mid 1990s through the early 2000s. So about 15 years ago. This was the era when new cars came with electronic fuel injection – but not direct injection. When they had air bags – but usually just two. They had transmissions with overdrive gearing – but not eight, nine and ten gears. 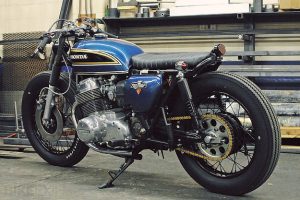 The cars (and trucks) from that era are worth their weight in gold, almost – because they can be kept going inexpensively almost forever.

When something breaks, it’s usually worth fixing – which is increasingly no longer the case with newer cars because the fix (more often than not, the replace) costs too much relative to the value of the car itself and – besides – something else Big Ticket will likely fail soon, too.

Once they reach a certain age, they quickly become money pits – and so, throw-aways.

Almost all of them now have computers, just like cars – and they are fuel-injected, just like cars. Even the small ones. Instead of spending twenty bucks on a set of jets to tune the carbs, as you could do until quite recently (relative to cars) you now send out the ECU to be reprogrammed.

For a couple hundred bucks.

You do not want to know what it costs to replace the computer – without which the modern bike won’t run. 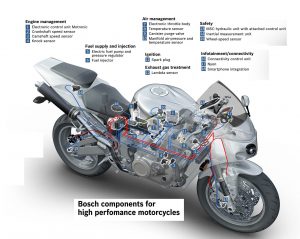 It may have drive-by-wire throttle (like a new car).

An old-school push-pull cable isn’t as Tech but it only costs about $20. You do not want to know how much it costs to replace the drive-by-wire system.

Or the ABS pump.

They are installing the same kind of idiot-proofing on bikes that afflicts all new cars: Traction control (even wheelie control – yes, really) and developing automated kick stands. A few bikes have air bags.

These bikes will be interesting to own when they are 20 years old.

Probably, they will not be owned by then. They will have been recycled by then. Such bikes – contrary to the norm in the motorcycle world since the dawn of two-wheeling more than 100 years ago – are not long-term keepers. It is one thing to keep, say, a ’70s Universal Japanese Motorcycle (e.g., a Honda CB750 or Kaw 900) for decades because they last for decades and because whatever goes south is easily and usually cheaply put right – with hand tools and garage time.

Not computers and shop time. 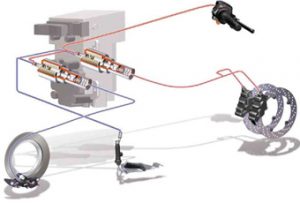 When your injected, ABS-equipped and traction-controlled bike develops Code Fugue, it is time to call the man. And the man may have to send out the ECU to another man – because he lacks the necessary inscrutable diagnostic equipment and other such to deal with it.

New bikes are even more like iPhones than new cars because of the fact of lesser value, more rapidly depreciating – and higher fix-it costs. Take a bike you just bought for say $12,000. Five years from now, the bike will be worth half that. In ten years, it will be worth almost nothing. Are you going to spend $1,000 on a catalyst-equipped replacement exhaust system for it – plus the 02 sensor? Buy a new $800 ECU?

New bikes do amazing things – just like new cars. But it comes at a price. Nothing’s for free in this life.

So – where’s the sweet spot for bikes? 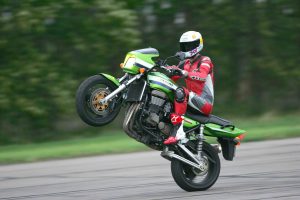 As recently as about five years ago – depending on the bike.

Many bikes – even sport bikes – didn’t even have computers or catalytic converters until around 2005 or so. Some within a few years of that range still had carburetors (my 2003 Kawasaki ZRX1200 is one of them) and these bikes are, in almost every meaningful/functional way – as easy (and cheap) to keep riding indefinitely as the bikes made 30 years ago. Only better because – as with new cars – the build quality/standards are generally higher and these bikes are modern where it counts (e.g., electronic ignition systems) and have almost all the advantages of the brand-new stuff as far as handling/braking/suspension equipment but lack the crap.

The electronic (and saaaaaaaaaaaaaaaaaaafety) add-ons that will – inevitably – turn them into throw-aways, just like cars have become.

A bike like my ’03 Kaw is still entirely hand-tool fixable. It has mechanical parts that may need to be adjusted or repaired at some point. But it has very little in the way of electronic stuff that will one day need to be replaced. One does not need to plug it into anything. There are no codes to read.

Besides which, I like that it’s up to me to maintain control of traction. To apply just the right amount of pressure to the front and rear brakes, proportioning the ratio myself – by feel, based on experience.