Here is a sound we’ll not be hearing much of soon – except in passing.

It is the sound of a better, vanishing time. A time when ordinary Americans could afford to own a V8-powered car or truck, a thing unprecedented in other countries – where exorbitant fuel costs and exorbitant taxes and restraining “regulations” assured only the rich could afford such an indulgence.

Stalin, for example, had a big Packard (later a ZIL, which was a copy of a big Packard) that had a big V8. He and his apparatchiks reveled in the power of “Soviet state power.” The average comrade in the old Soviet Union was lucky if he had a Trabant (which was made of recycled plastic and powered by a dismal 500 cc two-stroke, two-cylinder).

It produced the sounds of Communism. And millions of Russian comrades got to hear it. Soon, millions of Americans won’t hear even that – because not even a two cylinder 500 cc engine will be allowed them under the regimes new rules. They will hear the electric drill whirr of “zero emissions” electric cars, perhaps sound-augmented to give them a treacly memory of what they used to be able to hear – and have.

Several, actually. Big Mercedes touring cars, powered by supercharged V8s, sidepipe’d and chrome bedazzled – Fuhrerstandard flags flying. The volk got the wagen. Maybe, after many years of scrimping and saving. In fact, few ever did – because of the war.

They got bombed, instead. 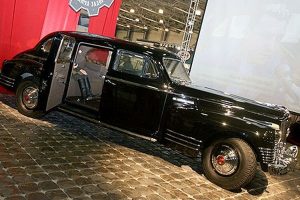 The Biden Thing has a V8, too.

Big limos and big SUVs, all of them powered by big V8s that use a lot of gas – and “emit” lots of the “gasses” we are told must be reduced to “zero,” by forcing us to give up gas-burning engines (all of them) in favor of electric motors, no matter how unaffordable.

Perhaps you have discerned a pattern.

It is not that big V8s – and big cars – are bad. No more than guns are bad – to draw another parallel. The government has plenty of guns – including guns that can fire automatically – and it isn’t going to give them up anymore than it is going to give up big vehicles with big engines. These are not bad things, you see.

For if we have them, it diminishes the haughty exclusivity of them having them.  It is not enough that they are wealthy and comfortable. We must be made poor and uncomfortable in order for them to enjoy it. 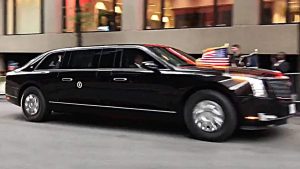 The great problem of affluence is its generality. What is wanted is a return to fuedality – to a time when there was great distinction in being the king or even one of his court flunkies. Those inside court had everything. Those outside, reduced to nothing. They were told it was the natural order of things, right and proper.

Today, we are being told it is necessary – to keep the “climate” from “changing.” In fact, it is to resurrect the privileges of king and court, to return us to our proper place.

The sound track accompanying this reversal of our fortunes is the sound of the 5.0 liter V8 that powers the ’22 Land Rover Defender Carpathia. It is a sound few will ever get to hear, except in passing – because this V8-powered Rover starts at $109,000. The average American – like the average comrade in Stalin’s Russia, the volk in Hitler’s Germany and now, Biden’s America – will only get to hear the sound as it rushes by, with someone else at the wheel.

Probably someone important, which he isn’t – to them.