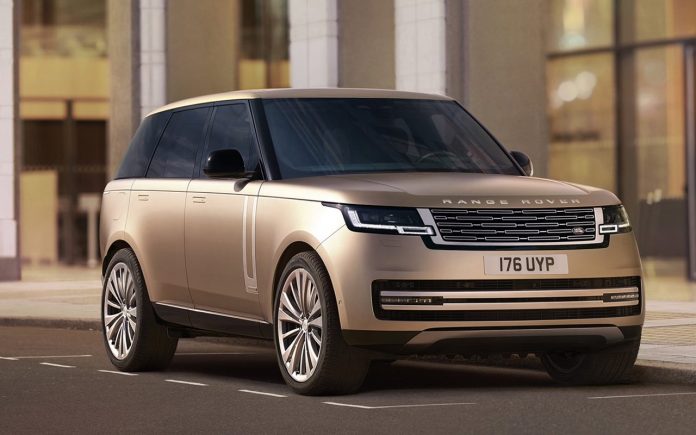 Before there were “SUVs,” there were 4x4s such as the original Ford Bronco, the Chevy K-5 Blazer and the International Scout. These were go-anywhere rigs but not gentleman’s rigs.

You wanted a Range Rover, if you wanted something like that.

The original model was also a 4×4 – there were no “SUVs” back in 1970, when the first one was offered for sale in the United States. But it largely created a new class of 4×4 SUV, before anyone had ever heard of such a thing.

Others have picked up that ball and run with it. But RR gets credit for being the one that invented it. 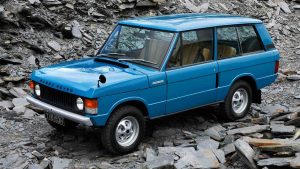 The Range Rover is Land Rover’s largest, most luxurious SUV. It is available in two lengths and seating configurations (five or six in two or three rows).

Each comes standard with formidable off-road capability, a high measure of on-road civility and immense power/performance.

The standard six cylinder engine makes almost 400 horsepower and the optional V8 makes more than 500. This is a gentleman’s 4×4 that goes anywhere quickly. 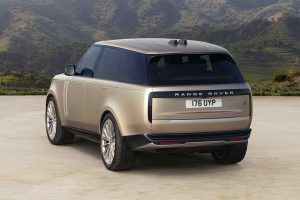 Prices start at $104,000 for the standard wheelbase/five-passenger model in SE trim. The long-wheelbase SE – which can be had with seven seats or more cargo room – stickers for $110,000. These come standard with an almost-400-horsepower 3.0 liter six cylinder engine teamed up with a “mild hybrid” system that throttles off the engine when it’s not needed, as when the RR isn’t moving. 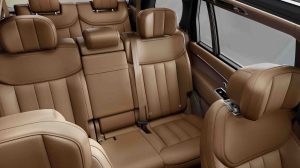 Cross-shops include other gentleman’s 4x4s such as the Mercedes GLS, the BMW X7 and the Cadillac Escalade.

The new Jeep Grand Wagoneer probably ought to be included, too.

The ’22 RR is all new. But – confusingly – the old (previous generation) RR is still being sold new, through the end of the current model year.  The upside there – if you’d like to pay a bit less than six figures for your gentleman’s 4×4 – is that you still can. The old/new RR is still available for $93,800 to start. This one comes standard with a slightly less powerful version of the 3.0 six (355 horsepower).

This is also your last chance to get the old SV – with a supercharged 5.0 liter V8 – brand new.

The slogging power of a draft horse combined with the performance of a race horse.

Room for five – or six. Or just more stuff. 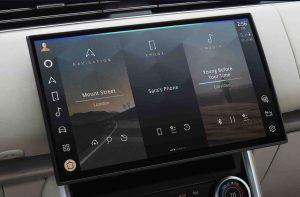 Land Rover – like ever other premium brand – has arguably made a mistake going all-in on LCD-only displays. These were exclusive to high-end vehicles when they first came out about five years ago. But – electronics being the one thing that gets less expensive each year – they are now common in cars that cost half as much (or even less). This detracts from the exclusivity of high-end vehicles so equipped.

12V power point (as for radar detectors) is hard for the driver to reach because it’s located in back.

Auto-stop/start system (like all vehicles equipped with this annoying system) detracts from the luxury vehicle experience. The good news is it can be disabled. 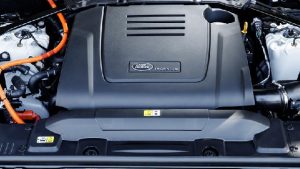 Both of the new RR’s engines are upgraded engines.

The base engine in the new RR is a turbocharged 3.0 six that makes 395 horsepower and 406 ft.-lbs. of torque, as compared with the 355 horsepower version of the same basic engine that is still standard in the old (but still available) RR.

The engine is paired with a “mid; hybrid” system of the kind that is becoming oddly common in high-end vehicles. Odd – because it doesn’t save much gas and even if it did, would people who buy six figure vehicles care about that? But even high-end vehicle manufacturers such as Land Rover do have to care about that. Not because of the gas savings but because of the gas emissions. By shutting down the RR’s engine as often as feasible – as when it isn’t need to move the RR – the output of the dread gas carbon  dioxide can be reduced to zero, at least for as long as the engine’s off. That’s why even high-end luxury vehicles are almost all now hybrid vehicles. 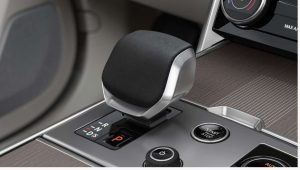 There’s some more good news, too.

But it’s even more than that. 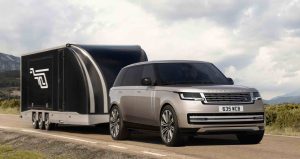 Every new RR comes with a multi-mode (and configuration) four-wheel-drive system with variable terrain programs, ride heights and selectable gearing. The center and rear axles lock – or unlock – according to the program selected for the conditions selected. All four wheels are always powered but more leverage can be dialed up – literally – by rotating the knob on the center console to select Low range gearing.

8.6 inches of ground clearance is standard but you can raise that to 11.6 inches at the touch of a button.

Max towing capacity with either of the RR’s new engines is 7,716 pounds. 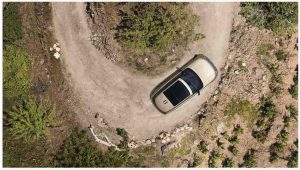 Don’t be deceived by how plush this rig is – or how fast it is. That latter is something it doesn’t have in common with the original RR, which was very elegant, very capable . . . and very slow. It was designed to get you there, comfortably – but all in good time.

Select “wade” and it rises to the occasion- again, literally. The adjustable ride height adjusts upward so you can proceed onward.

Other modes include Grass/Gravel/Snow, Mud & Ruts, Sand and Rock Crawl – as well as individually configurable settings to suit your inclinations. And no worries about mussing the carpets with mud from outside – because it’s no longer necessary to stop and get out to have a look-see at which way your wheels are angled. Just look up – at the Heads-Up Display, which displays your current wheel angle as you steer. This means not having to stop (and potentially lose momentum) while rock-climbing. 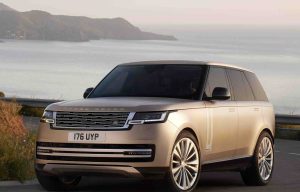 Speaking of angles . . . the RR comes standard with a four-wheel steering system that decreases it turning radius to just 35.9 feet and endows it with the maneuverability of a smaller rig.

But what’s most remarkable about the new RR – vs. the original RR – is that its off-road/adverse-weather capabilities are matched by its on-road capabilities

The original RR was plush, but tipsy.

That being a function of the times. Once upon a time, you had to pick a specialty. High-performance vehicles were almost always low-performance vehicles in adverse weather (and forget off-road conditions). Highly capable vehicles like the original RR had to be driven with respect for their limitations on road, especially in the curves. You might be able to wade through almost three feet of water but forget trying to take a corner posted 35 MPH at 55 MPH – unless you wanted to risk taking it on two wheels.

Those first-generation gentleman’s 4x4s had to be driven gently, on road. The new RR can be driven as enthusiastically on-road as it can be depended upon off-road. It’s a miracle on par with being able to eat whatever you like and still have a six pack. 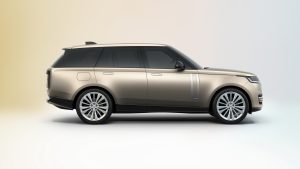 Probably one of the reasons why cars – sedans in particular – have been almost entirely supplanted by crossovers (and SUVs) is because they largely lost their individual identities. They began to look increasingly the same, regardless of brand or even price –  and that refocused attention on their lesser practicality vs. crossovers, say. Which also look much alike but have the everyday virtue of being practical.

The RR is still happily individual. Its ultra-flush (even the door handles retract) modernized shape is still distinctively retro – just as is the case of the handful of still popular cars, such as the Dodge Charger, that don’t look the same as other cars. That summons memories of their iconic ancestors – which makes you want (vs. need) them. 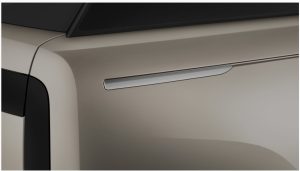 You can get the RR in the standard length/wheelbase (198.9 inches long/118 inch wheelbase) which gets you two rows, seating for five and 40.7 cubic feet of cargo space behind the second row. Drop the second row and this expands to 83.5 cubic feet in total.

The longer-wheelbase (126 inches) version stretches out to 207 inches end to end and now you have the option to increase the seating capacity to seven or increase the cargo capacity behind the second row, substantially. Total cargo space opens up to 92.9 cubic feet. However, be aware that if you do opt for the third row of seats, the cargo space behind them winnows down to just 8.7 cubic feet.

One area of big difference between the new RR and its iconic ancestor is inside. The general themes are similar, but the classic RRs of the past did not have flatscreens in lieu of instruments. The problem there is that – increasingly – everyone else does. Including even entry-level cars. Maybe not yet as big or as fancy as the ones in the RR.

LCD flatscreens are among the few things getting less expensive to make – and to make bigger and fancier, for less. It won’t be long before practically every car has an LCD gauge panel (and secondary panel) just as big and just as fancy as those found in the highest-end vehicles, like the RR. And that detracts from the high-end specialness that ought to be standard in a high-end vehicle.

A return to the elegance of finely crafted instruments that cannot be made cheaply, in Chyna, might be the way to re-establish that. 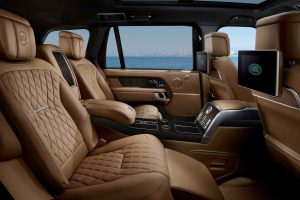 Every RR comes standard with a wealth of equipment – including the adjustable-height suspension and four wheel steering – plus a truly excellent Meridian audio system, front and rear seat heaters, real leather seat covers and a soft suede cover for the transmission gear selector

A 34 speaker (not a typo) Meridian system is standard in the Autobiography and First Edition trims.  Plus a front console ‘fridge in the glovebox and massagers for the front seats. The First Edition ups that ante with 23 inch wheels, massagers for the rear seats and leather-covered cushions for sitting on the lower section of the RR’s two-piece tailgate.

A heated windshield is available on any RR and well worth getting if you have to deal with winter. It helps clear the glass much faster when it’s freezing cold out. 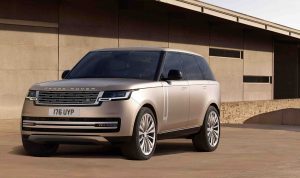 There’s not much missing that can be imagined, except for one thing. That thing being a place to plug in an accessory with a 12V cigarette-lighter-style power plug. Well, there is a place. But it’s not in a place that’s easy for the driver to reach. The sole cigarette-lighter-style power point in located on the back of the center console, where it is easy for people sitting in the back seats to reach. It means that if you want to power a radar detector, say, it is necessary to run the cord from front to rear and unplugging is hard to do (if you’re the driver) without stopping to get out, go back there and do that.

It’s a minor gripe – but necessary to make it.