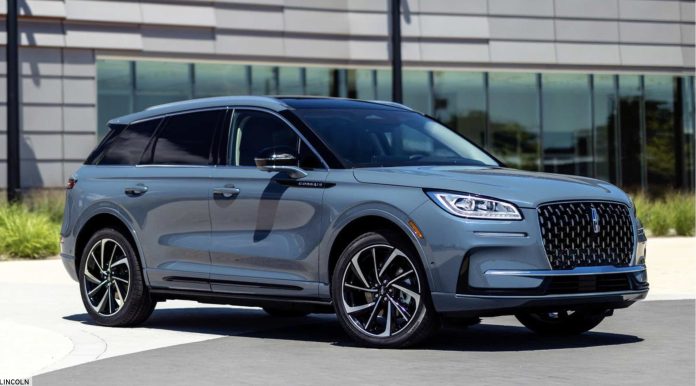 This is understandable. SUVs – and crossovers (which are basically light-duty SUVs built on car-type platforms) offer more for the money, literally.  An SUV or crossover always has more cargo room than a car of the same length and often, more room for passengers, too – in the form of an often available and sometimes standard third row of seats.

Lincoln’s Corsair doesn’t have that. But it does have about four times as much cargo-carrying capacity as a car the same size. 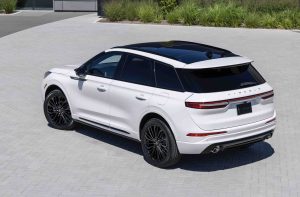 The Corsair is a compact-sized luxury crossover SUV based on the Ford Escape.

Being a Lincoln rather than a Ford, the Corsair comes standard with the Escape’s top-of-the-line 250 horsepower engine and offers a stronger plug-hybrid powertrain that enables the Corsair to travel about 28 miles (at normal road speeds) on battery-electric power alone. In addition, the Corsair is available with an adaptive suspension system that’s not available with the Escape and a new self-driving system Lincoln calls ActiveGlide.

Being a Lincoln, it’s also more expensive than its Ford relation. 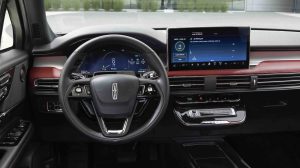 Prices start at $38,690 for the Standard trim with front-wheel-drive. AWD can be added as a stand-alone option.

A Reserve stickers for $43,075 with the same engine (and FWD/AWD choices). This one an be equipped with a Jet Appearance Package that adds black anodized 20 inch wheels and a premium 14 speaker Revel audio system.

The top-of-the-line Grand Touring comes with the plug-in hybrid powertrain and a full-length panorama sunroof, among other upgrades. 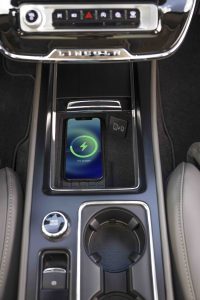 The Corsair gets a styling refresh as well as larger 12.3 inch LCD main instrument panel and an even larger 13.2 inch, Tesla-like secondary infotainment screen. The previously available 2.3 liter turbocharged engine has been dropped, making the plug-in powertrain the Corsair’s strongest powertrain.

Plug-in hybrid option allows electric-only operation without being tethered to a power cord (the gas engine kicks back on automatically if you exceed the vehicle’s range on battery power).

Lots of cargo room vs. a car the same size.

Back seats are roomy.

Hybrid uses only slightly less gas than the standard model. 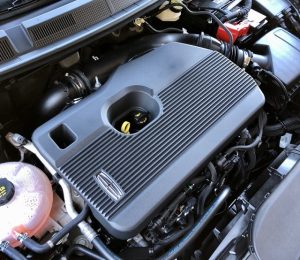 The Corsair’s  standard engine is the same 2.0 liter turbocharged four cylinder engine that’s optional in the merely Ford Escape. It produces 250 horsepower and is paired up with an eight speed automatic transmission. Front-drive is standard, with AWD available optionally.

This set-up gets the Corsair to 60 in about 6 seconds – and gets you 22 miles-per-gallon in city driving and 29 on the highway.

The Corsair’s optional powertrain is a plug-in hybrid set-up that pairs a 2.5 liter Atkinson Cycle engine with a lithium-ion battery pack and electric motor. The combo delivers 266 horsepower and 34 miles-per-gallon in city driving and 32 on the highway. 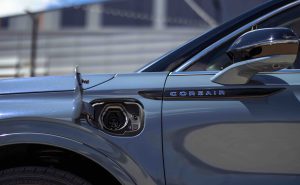 With a couple of asterisks.

The first relates to the second.

Because it is a plug-in hybrid, you could end up using less fuel than advertised. If you are able to do a lot of your driving within the hybrid’s 28-or-so-mile range on a fully charged battery. If, as a for-instance, your drive to work is only about 20 miles distant, you could drive to work without using any gas at all. And if you can leave your Lincoln plugged in while you work – a full recharge on household curren takes about three hours – you could drive home without using any gas getting home, too.

If you drive it this way, you could save a lot on gas and – depending on the cost of gas – you might even recover the buy-in cost of the plug-in hybrid.

And if you don’t drive it that way?

Well, the good news is at least you won’t have to stop when you run out of range, as you would have to do if you were driving an EeeeeeVeeeee.

The plug-in hybrid’s biggest plus, arguably, isn’t so much the gas you’ll save but the time you won’t be forced to waste. So long as you’ve got gas in the tank, you won’t have to stop for a charge when the hybrid’s battery side runs down – because the gas engine will charge it back up as you drive. This, of course, burns gas. But it eliminates the having to obsess over (or at least, plan around) the range/recharge times that come along for every drive in an EeeeeVeeeee. 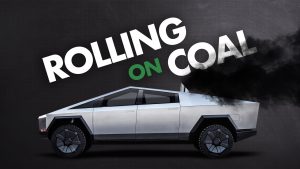 Spontaneous trips? Check! Forgot to charge it up?

And if you’re worried about “the environment,” don’t be. Even though a plug-in hybrid does burn gas, it emits very little in the way of harmful gasses. EeeeeeVeeeees, on the other hand, emit lots of C02 (if you consider that gas harmful).

Just not at the tailpipe.

Many small crossovers have small (or even no) towing capacities but you can pull a small trailer with the Corsair, up to 3,000 lbs.

Lincoln may not be making cars anymore but the SUVs that carry the badge have the feel. The Corsair isn’t in a hurry because that’s contrary to the point of enjoying the getting-there. It does not try to be “sporty” – because why be what almost everyone else is trying to be? Instead, it succeeds at being plush, which is the quality that used to be sought-after by those in search of luxury.

They will find it here.

You feel it before you drive it. Once you sit in it. The seats are  . . . plush. And so is everything you touch. Softness abounds, accentuated by gentle curves rather than harsh angles.

It calms you down before you start the engine.

Once you do – and drive off – the plush theme continues. You feel it in the seat of your pants and the small of your back. Or rather, don’t feel it. The Corsair’s suspension is set up to be . . . plush.

If you want to go autocrossing, this isn’t your ride. But you won’t lose hubcaps in the curves, either – in part because the Corsair hasn’t got hubcaps. But also because it still corners with more poise than a lot of “sporty” cars did, back when Lincoln was still making cars. 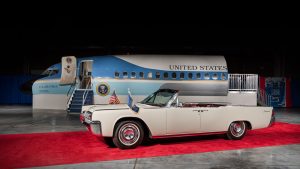 And – speaking of that – while the Corsair with the standard 2.0 liter engine isn’t as quick as some others in the segment, zero to 60 in six seconds is quicker than probably 90 percent of the V8-powered muscle cars of the once-upon-a-time ’60s.

The hybrid iteration isn’t as quick (chiefly because the hybrid components render it heavier) but it is even quieter – when operating on battery power alone. And it feels quicker, at first – when starting from a dead stop – because of the right-now torque produced by the electric motor. But the chief virtue – again, per above – is not being tied to a cord. You can plug in when you have time.

Or not, as you prefer. 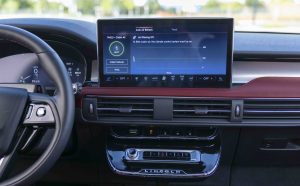 The styling refresh for ’23 is subtle, in terms of the exterior. The grill is larger. The side lights have been changed. But the most noticeable changes are inside – where there are now two large LCD touchscreens, one in front of the driver and a second one built into the center stack. Since practically every car now comes with an LCD touchscreen – something that was a high-end-vehicle-only thing as recently as five or so years ago – the trend is to make them bigger in high-end cars.

The upside here is it’s easy to see and use the larger LCD touchscreens, which (as here) have larger icons for the various functions. The downside – if you are a higher-end-brand like Lincoln – is that within another few years, every car (including lower-end brands) is probably also going to have big LCD screens, because electronics are the one thing that gets less expensive each year. 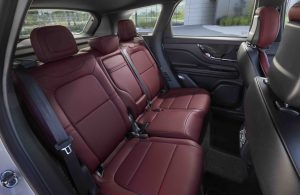 And – when everyone has a big LCD screen – it detracts from the exclusivity of having a big LCD screen. It becomes an expected thing, like AC – which was also once-upon-a-time a high-end feature that set apart the cars that came with it.

One thing that isn’t apt to get old is the plenty-of-room you get – even in a compact-sized crossover such as this Corsair. It is only 181.4 inches long, which makes it about the same length as a compact-sized sedan such as a Honda Civic (which is actually a bit longer, at 184 inches end-to-end) yet it has about four times as much space for cargo – 56.2 cubic feet with its second row folded forward – than a Civic-sized sedan (which has 14.8 cubic feet in its trunk). Even with its second row up, the Corsair has about twice the cargo space – 26.9 cubic feet – and more usable space, too, on account of the much larger opening of a liftgate vs. a trunk.

Oddly – for a luxury vehicle – wireless charging costs extra. So also an extra set of USB points for the rear seat passengers. 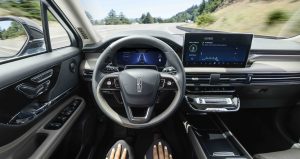 Lincoln offers a self-driving system called ActiveGlide that allows “hands-free” driving in what are called Blue Zones (more about this, here) which are sections of highway that supposedly have the necessary data point cues to allow the system to work. This includes hands-free lane changing, too.

\However, Lincoln says – and you should – keep your eyes on the road at all times, just in case there any miscues. 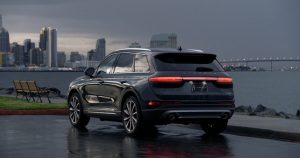 The catch there is expecting people to keep their eyes on the road when their hands aren’t on the wheel. Lincoln includes an eye monitor that supposedly detects a driver whose eyes aren’t focused on the road – and will disengage the “hands-free” system if he doesn’t watch the road. But what about the lag, in between? And what is the point of a “hands-free” system that still requires the driver to keep his eyes on the road – and be ready to drive at all times?

It’s not a Continental – and it hasn’t got suicide doors. But it’s still very much a Lincoln at heart.