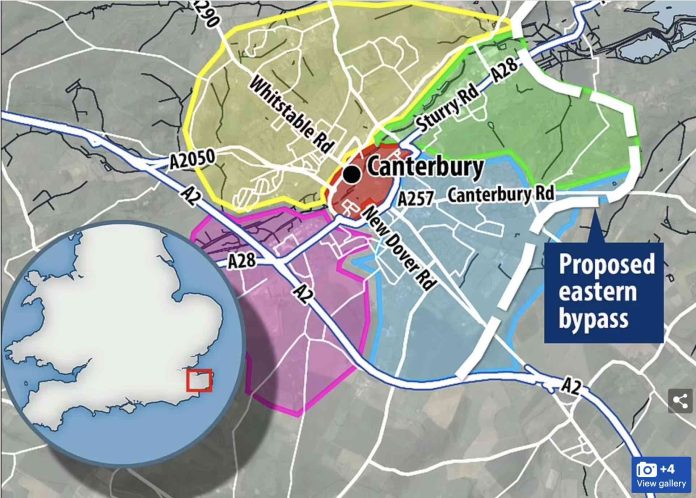 Some believe that the creatures behind the curtain give us a preview of the show to come – a kind of anticipatory taunting. To let us know, but also to let us know we can’t do anything to prevent it from happening, prior to it happening.

Perhaps the best example of this being Event 201, which “simulated” a worldwide outbreak of a coronavirus – the cases! the cases! – just months before we all became unwilling participants in the exercise.

Other looks-behind-the-curtain come to us via films, where we are given glimpses of what they have in store for us. Some of that may be just intuitively prophetic; extrapolation from current trends to future probabilities. But perhaps such prophecies sometimes get a little inside-baseball help. This isn’t speculative. There is the fact of Operation Mockingbird, the CIA’s infiltration and use of media-celebrity-entertainment stooges to “front” story lines and plot twists the CIA wanted the public to imbibe as true.

Which brings us to The Hunger Games, with its interestingly coincidental use of the term Mockingjay, Part 1 as the second half of the book/movie’s title. Perhaps even more interesting, in terms of what the book/movie was perhaps meant to preview for us, is the book/movie’s fictitious land of Panem, the former United States, ruled “democratically” – in the East German/North Korean/American Leftist – sense – that ” . . .was established sometime after a series of ecological disasters and a global conflict brought about the collapse of modern civilization.”

It consists of a “federal” – meaning, centralized, authoritarian – capitol city, in which all the beautiful and rich (as well as not-hungry) people live  . . . and everywhere else. 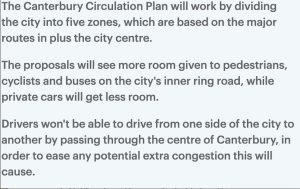 This brings us to the goings-on in the British city of Canterbury where a kind of Panem is being erected for real, perhaps as a Beta Test, a la Event 201. In the name of “encouraging” – which means of course, coercing – the people of the area to “walk, cycle or use public” (that is government) “transportation” rather than use their cars to move freely about, the area surrounding downtown Canterbury (effectively, the capitol city of Beta Test Panem) will be isolated from the outlying areas, which are each divided into four “provinces.” Each of these will, in turn, be isolated from the other.

Drivers who breach the containment of their “province” would be fined – meaning, if they fail to pay, violent men (and women and probably also  “men” who were once women, given the state of things) will force them to pay, using every means necessary until they do pay. Such being the nature of “fines.” And of using them to “encourage” compliance. 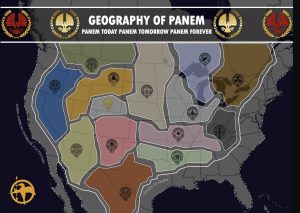 People can still leave their province by car – for now. But if they wish to avoid being “encouraged,” they must ” . . . drive out of one neighbourhood onto a new ring road around the city, before re-entering their chosen section,” as the Daily Mail describes the Panem Plan. Which is called the Canterbury Circulation Plan, an ironic thing to call it since it is designed to throttle “circulation.”

The plan’s critics say it “… will stop direct journeys across the virtual lines, meaning that short trips to supermarkets, cafes and GP surgeries in cars will be banned and create more traffic.” ALPERS – automated license plate readers – will be “operating at entry and exit points to each of the area. This will stop drivers from sneaking between neighbourhoods without facing a fine.”

Just like in the book/movie, where the residents of each province of Panem were “encouraged” to remain within the confines of their province. The gleaming Capitol was, of course, off limits.

It has the ring of the pending, doesn’t it?

One of the planners behind the Panem Plan is a “conservative” politician, Ben Fitter-Harding (a name that sounds as if it came right out of the book/movie) who says “I really hope that in 2045 people will look back and see this is what made Canterbury realise the potential it has. No one’s movement will be constrained at all – it’s cars going down the rat runs that will be stopped.”

“No one’s movement will be constrained at all” – provided they walk, cycle or use government transport to move. It is “cars going down the runs that will be stopped.” In other words, your movement will be constrained – if you want to move using a car. Meaning, you will be “constrained” from moving any farther than your feet make feasible, which means only so far. Or as far as you can pedal, using your feet. Or – last resort – according to the government’s timetable and under the government’s control, via a government-controlled bus or train.

How soon before Panem come to you? 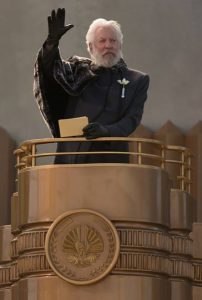 In varying degrees, it is already here. In “provinces” across the United States, planners are busily planning Panems for us. You will perhaps have heard about “road diets,” for instance – by which is meant mobility rationing, if you do not wish to use foot/pedal power, or government controlled forms of mobility. The “diet” is meant to “encourage” you to stop driving. Which means, as a practical matter, you will be “encouraged” to live no farther from where you want or need to go than your feet or bicycle or government transportation can get you. Which will not be very far, because it will not be very convenient. It will take much longer and be much less pleasant and – most of all – it will be entirely out of your control as to when and how you go, unless you walk or pedal.

“For residents within the five zones, they can access the facilities within their neighbourhood by car if they need to, says hyphenated-name politician, who could stand in for Panem’s President Snow. “But if you want to travel into a different neighbourhood, the best way to do that will be by walking, cycling or using public transport.”

Welcome to Panem, for real – which is what they are planning – and have just given you another preview of.

If Only Clover Would Move Over