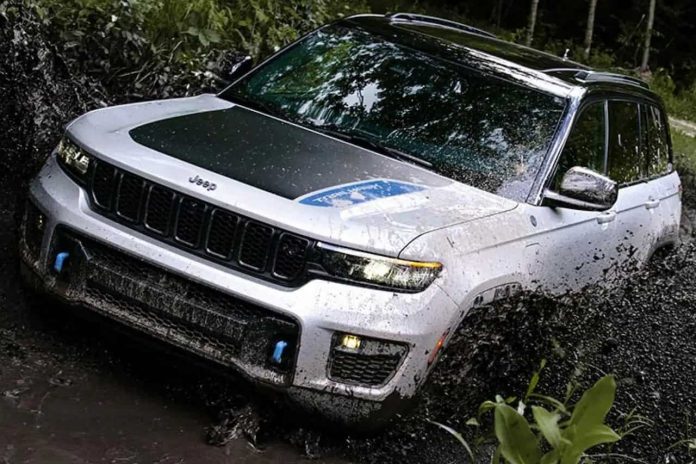 The saying goes that you cannot eat your cake and have it, too. But what if you could?

Plug-in hybrids like the Jeep Grand Cherokee 4xe can be electric vehicles – without the problems that beset electric vehicles. It can travel about 25 miles without burning any gas. But you don’t have to worry about what you’ll do when it runs out of range.

You can charge it back up.

Or fill it back up.

That’s having your cake – and eating it, too.

The only catch being – can you afford it? 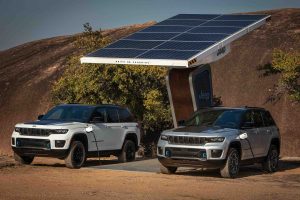 It is not a crossover SUV – the latter referring to a vehicle that looks like an SUV but is mechanically/functionally more like the cars that crossovers are based on. Those cars being (typically) front-wheel-drive  cars (with AWD usually optional and sometimes standard) and not having the two-speed transfer case and 4WD Low range gearing that is one of the mechanical/functional attributes  that defines an SUV.

The leverage advantage of having 4WD Low range gearing gives SUVs more pulling power to get through deep snow and mud, especially on unpaved surfaces. But it’s not just that. An SUV is also usually heavier-duty in its construction, so as to be less likely to break if used off-road (and also for towing, on road).

That’s why the GC is an SUV rather than a crossover.

It can also be an electric SUV – if you buy the 4xe version, which is really a drivetrain option for the Overland and Summit/Summit Reserve trims and standard equipment with the Trailhawk, the most off-road-ready of all GC trims.

In addition to the plug-in hybrid/four cylinder gas engine drivetrain (which is also stronger than the available V8 drivetrain) this one comes with adjustable ride height for more clearance to get over deep snow and through deep mud/standing water (up to tw feet deep) plus  an electrically de-coupling front sway bar (to enable more front wheel articulation and so crawl over objects in its path more readily), Goodyear all-terrain tires, front tow hooks and a special closed-circuit camera system that feeds images of wheel position/angle into the cockpit so the driver doesn’t have to stop, get out and look to see where the front wheels are pointed.

But you can also get the 4xe drivetrain – without the Trailhawk off-road enhancements – for $60,360.

If you select the 4xe drivetrain or the V8, 4WD is included as part of the deal. V6-equipped models can be ordered with 4WD, if desired.

Two rows of seats and five-passenger capacity are standard but those who need an additional row – and seating for seven – can get them in the Grand Cherokee L (reviewed separately, here). 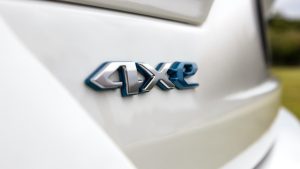 A 19 speaker McIntosh audio system is available in higher trims (including the Trailhawk 4xe) and Limited and Overland trims now come standard with a larger, 10.1 inch touchscreen.

No waiting to charge up for the plug-in hybrid.

400-plus miles of range with the plug-in hybrid.

More than V8 power (375 horsepower) with the plug-in hybrid.

Trailhawk is only available with the plug-in drivetrain, mightily decreasing the affordability of the most off-road-ready version of the GC. 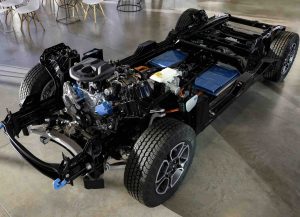 Probably not for long, though – which is harbingered by the new plug-in hybrid drivetrain and more so by the fact that neither the V6 nor the V8 are available with the most off-road-capable version of the GC.

That one being the Trailhawk.

The one designed to appeal specifically to buyers who would probably be inclined to buy the V8 – if it were available.

So, how to make a 2.0 liter four cylinder engine more appealing than a 5.7 liter Hemi V8? Make it more powerful. 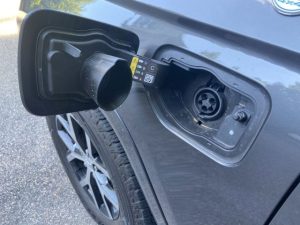 The plug-in set-up allows for electric-only driving (when the battery is fully charged) of about 25 miles. That is obviously much less range than a pure electric car, but the critical factor is not being tethered to a cord. As a practical matter, a plug-in hybrid has more range because it does not have to stop for long when it runs out of range. The gas engine comes online and you keep going – in this case, for more than 400 miles of range on a full tank. 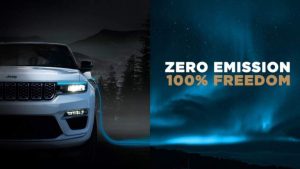 When you have time to stop – for a charge – you can plug the 4xe in as you would an electric car. But if something unanticipated comes up and you need to drive, now – not tomorrow morning – you can. 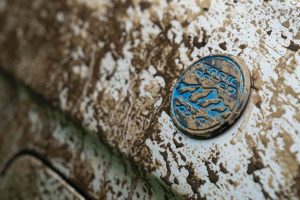 In theory, you might be able to squeeze more mileage out of the 4xe if your daily driving allows you to operate often in electric-only mode – and assuming you regularly start out with a full charge, so as to avoid the gas engine coming on for most or even all of your drive.

The difficulty there is the same with full-time electric cars in that you have to budget the time to fully recharge – several hours at least on 240V and overnight on 120V. If you can arrange your driving around that, you may approach the “56 MPG e” rating, which is a difficult-to-parse (and arguably misleading) measure of an EV’s MPG-equivalent fuel consumption.

The real point is maintaining what buyers expect in terms of power/performance in a top-line GC, which in the near-future will not be available with the V8 at all. Stellantis – Jeep’s parent company – has already announced the pending retirement of the 5.7 liter Hemi in all Stellantis models after the 2024 model year. The Trackhawk – which was powered by the same supercharged V8 used in the Hellcat Charger/Challenger – has already been retired. The plug-in hybrid drivetrain is a way for Jeep to comply with existing and pending federal regs that have effectively sealed the doom of V8s and also V6s without giving in entirely to 100 percent “electrification.”

At least, not yet. 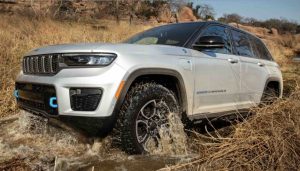 Being able to just drive – as far as you need to, whenever you need to – is a thing we have taken for granted that “electrification” is taking away.

Whatever your take on electric-only vehicles, there is no getting around the fact that there is more to them than just driving them. If wherever you need to go is farther than the range you have left, you will have to think about where you’ll charge – and whether you have the time to wait for it. You may find you need to get someplace right now, but haven’t got the range to get there right now. Yo may find there is no place on your way to “fast” charge – and so may  have to go out of your way to get there.

Assuming you make it there. 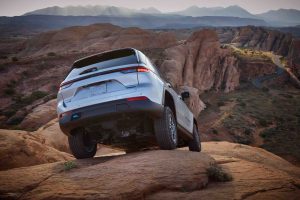 No such issues with a plug-in hybrid like the 4xe. It eliminates every hassle of owning an EV while preserving every benefit of owning a non-electric vehicle. Some may say it’s not as “clean” as a pure electric vehicle, but this is a debatable contention given that most EVs are powered mostly by hydrocarbon fuel-burning power plants and their high-powered electric batteries (which are much larger than a hybrid’s) consume more power that way, too.

But the point – if the object isn’t to just limit how far people can drive and how often they can drive – is that a plug-in hybrid doesn’t restrict people’s driving. 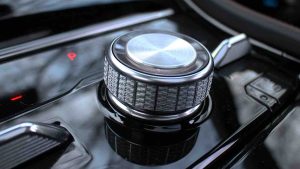 The 4xe is almost Hemi-quick, too.

It gets to 60 in about six seconds, dead heat with the Hemi-equipped GC’s 6.2 seconds. The chief difference here is feel – and sound. The 4xe combo pulls with more authority at low-mid-range speeds with less pressure on the accelerator pedal. But missing is the bass rumble of the V8 as you trundle along and when you floor the accelerator, the 4xe’s four cylinder engine sounds like what it is – as opposed to the authoritative sound of the V8.

It’s weird going V8 fast without the V8. But it’s nice that you still can – and without having to stop or sweat how soon you’ll have to. 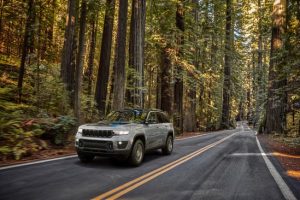 If you choose the hybrid powertrain, you will get two fuel doors – one for gas, the other for electricity. Thoughtfully, the door for electricity is located up front, on the driver’s side front quarter panel – so you don’t have to back up to assure the plug is close enough for the cord to reach wherever you’re going to plug in to.

If you choose the Trailhawk with the plug-in powertrain, you will get an adjustable ride-height suspension that can be lowered or raised via a selector button on the center console. The highest setting provides 10.9 inches of ground clearance. Jeep’s most capable 4WD system – Quadra Trac II – is also part of the package. It includes a 2.72:1 Low range, 47.4:1 crawl ratio and locking differentials, 18 inch wheels with all-terrain tires and multiple driver-selectable terrain modes.

You also get a set of blue-anodized tow hooks ip front. 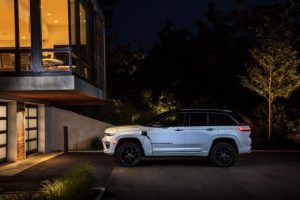 4xe models also get hybrid-specific displays in the main gauge panel as well as the secondary LCD touchscreen in the center stack. These include dual range (electric-only and gas-electric) and real-time power flow, so you can see what’s being powered – and by what. There is also a charge scheduling menu, but the beauty of this Jeep is you don’t have to schedule your charging or even think about it much, if at all.

The Trailhawk isn’t just the most capable version of the GC. It is also one of the most luxurious. It comes standard with leather seats (heated and cooled) and it can be equipped with driver and front seat passenger massaging seats, front seat passenger 10.25 LCD touchscreen that mirrors the main touchscreen in the center stack, night vision and a powerful McIntosh premium audio system with 19 speakers. It’s so luxurious that even the top-of-the-line Summit Reserve – which approaches $80k  – isn’t that much more luxurious. It has a few additional niceties, such as open pore wood trim and a soft-to-the-touch suede headliner. But you will be hard-pressed to feel deprived of anything significant in a loaded Trailhawk 4xe.

Jeep seems to be very serious about sluicing buyers toward the hybrid powertrain by installing it in the most capable (and almost-most-luxurious) version of the GC. Probably so as to assure them that they’re not going to be deprived of anything, besides the number of cylinders under the hood.

The 4xe’s maximum tow rating  – 6,000 lbs. – is a couple hundred less than the V8-equipped GC’s 6,200 lb. maximum. But the real difference is the cost – of the hybrid drivetrain – and the fact that you must pay it if you want the Trailhawk upgrades.

This has raised the bar for entry much higher.

The new Trailhawk costs an astounding $16,210 more this year than it did just two years ago. That’s quite a price hike – and it is probably going to cost Jeep some sales for the simple reason that there are fewer people who can afford to spend $65k on a vehicle, irrespective of its desirability. This can also be seen as what it effectively is – that being a restricting of the most capable version of the GC to those affluent enough to be able to afford it. Which is what “electrification” amounts to, in practice as opposed to rhetoric. Electrified vehicles are more expensive and becoming even more so – due to the expense of raw materials such as lithium – rather than less expensive, as people were told they would be. 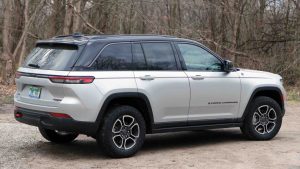 This is also why electrified vehicles tout power, capability and luxury. Because people who can afford to buy them won’t accept a basic vehicle at that price.

The GC 4xe is hard to fault – except insofar as what it costs.