By 1974, the muscle car frenzy of the 1960s had petered-out like an all-night kegger at sunrise. After a ten-year bender with 100-octane leaded premium and 300-horsepower V-8 engines, Ford Motor Co. faced a harsh hangover of “catastrophic converters” and watered-down 87-octane unleaded which you had to stand in line all day to get. Reeling, wild-eyed, and increasingly desperate, Ford belched up the Pinto-sourced, “downsized” Mustang II; it had all the power (and build quality) of a crushed plastic beer cup.

The “little jewel of a car,” as then–Ford Chairman Lee Iaccoca daringly called it, was emblematic of the era—a time of equally-downsized expectations and a sad harbinger of things to come. As a jewel, it was cubic zirconium.

In addition to being much less physically substantial than any previous Mustang (the 1974 model was almost 20 inches shorter and some 400 pounds  lighter than the 1973), it was also the first entirely performance-free Mustang. Initially no V-8 engine was even available—a depressing “first” for Ford’s pony car. The only alternative to the 88-horsepower Pinto-derived rattletrap four-cylinder engine was a just slightly less pathetic 105-horsepower 2.8-liter “Cologne” V-6 sourced from Ford’s European operations—along with a half-hearted “Mach 1” stripe package intended to remind buyers of better days.

It was thin gruel, however, compared to the previous year’s fastback Boss 351—a car that would prove to be the last decent Mustang Ford would build for another decade.

Having foot holes in the floorboard like a Flintstones car might have seemed like a way to get the hapless little pony moving faster, and thanks to its rust- and leak-prone thin-gauge sheet metal, this proved to be a common “aftermarket accessory” with just a winter or two of road salt—but without any noticable speed boost. Automotive journalists of the era praised the Mustang II as being “right for the times”—even while noting that trim pieces often fell off in their hands. Any real cowboy riding a horse this slow would have sharpened his spurs and powered-up the cattle prods.

In 1975, Ford tried to re-attach some of the Mustang’s gelded “equipment” by bringing back a V-8 option. But even though there were eight cylinders, just 122horsepower was developed—an all-time low for the Ford 302. The 5-liter engine’s potential was further hampered by the ever-stricter emissions equipment imposed by the federal government—but even more so by the fact that Ford was trying to bandage a 1960s-era engine that had never been designed with either good mileage or low emissions in mind. Making matters worse, the struggling engine was only available with a power-sapping three-speed automatic and “highway gears” designed to promote fuel economy, not acceleration. The result was performance hardly better than the V-6 with the four-speed manual—and insufficient to outrun any real Mustang of the past.

Still, Ford gamely made a “performance package” of this basic combo—and in 1976 tacked on billboard-sized “Cobra II” stickers that screamed “I’m slow!” in perfect tune with the sickly whistle blowing from the single exhaust pipe. By 1977, an even more gaudy set of air dams, chin spoilers, and a hood scoop, which, of course, didn’t scoop anything, were added. It seemed the weaker the car got, the more aggressive and outsize the decals it was papered-over with, like dressing a turtle in cheetah skin.

The ultimate embarrassment came in 1978—when the blunt-toothed, sore-gummed King Cobra appeared. Taking a cue from the huge success of Pontiac’s gaudy Trans-Am of the period, Ford may have reasoned that buyers would at least feel fast driving a car with a massive prismatic decal of a stylized Cobra draped over the hood and loud “5.0” engine call-outs on the now rear-facing—but still fake—hood scoop.

5,000 King Cobras were made before the plug was pulled—and the damage to Mustang’s once-proud legacy finally put to an end.

* 1974 was the first year a four-cylinder engine was used in a Mustang—and the first year no V-8 option was offered. (You want eight cylinders? Buy two cars!)

* The downsized Mustang II was named “Car of the Year” by Motor Trend magazine in 1974. (But remember, this was the same year that the song from The Towering Inferno won an Acadamy Award.)

* In 1976, a Cobra II was featured in the popular TV show, “Charlie’s Angels” and driven by Farrah Fawcett’s character, Jill Munroe. (Did I mention the emphasis of appearance over substance?)

* 1977 was the first year for T-tops, which became a popular option—and the Cobra’s fake hood scoop now had its “air intake” at the back (facing the windshield) rather than up front. 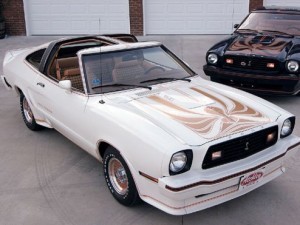