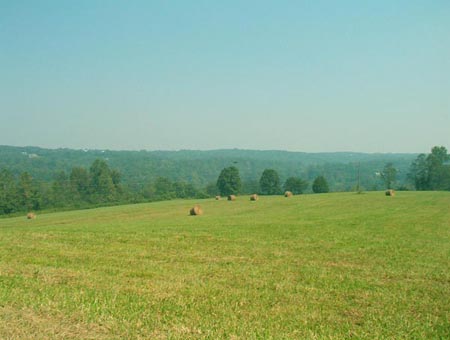 Last weekend, we bought some land.

This flies against policy (our policy) of never buying anything except that which can be paid for at the time of purchase – and even though I know full-well that we won’t really own the land, just as we don’t really own the land we have (or the house that sits upon it) because owners don’t pay rent in perpetuity to the government, which we, like all “owners” must (in the form of annual property taxes) if we wish to continue to be allowed to remain on the land (and in “our”) house.

We did this deed as a way to hedge against what I am increasingly convinced is coming – the destruction of the dollar, followed about five minutes after this becomes common knowledge by the final implosion of what’s left of the American economy.

Land – physical land – is a good way (perhaps the only way, in a major economic crisis) to keep at least some of your wealth intact and more importantly – if you act in time – a way to transfer the value of fiat dollar-denominated assets into something tangible, of real value. Gold, of course, is another way to do this but it has a major disadvantage: It is only valuable as a sort-of proxy for wealth; that is, it has value only as long as someone else who has something you want is willing to trade you what he has for the gold you have – which means that he (the owner of the item you want) must believe he will be able to then swap the gold he gets from you to some other person who has something he wants, something that’s not gold. Put another way, gold is fungible only if there’s a still-operating economy. If the worst happens and the system really does experience a catastrophic collapse, the value of gold may collapse along with it – at least, for awhile. Until civilization re-assembles itself. But in the meanwhile, what will you do with your gold? It is pretty to look at but you can’t eat it and outside of a few specialized industrial applications that won’t matter during a period of crisis, it is useless.

Land, on the other hand, not only has tangible value (like gold) and is fungible (also like gold) because you can always convert it into gold  or trade/sell it for something else you value – but perhaps much more importantly, in a time of real crisis, land can give you life.

You can grow food on land – which could mean the difference between life and death, when the system runs off the rails and Costco and Safeway are looted to the linoleum. Which – count on it – is sure to happen the moment the masses get a whiff of the dollar’s imminent collapse. And you can hunt on land, too – assuming enough acreage.

But the number one advantage to land, as I see it, is physical distance between yourself – you and your family – and the latter-day Golden Horde that is already in the process of forming itself up. (Witness the so-called “flash mobs” of “youths” in Wisconsin, Philadelphia and other places.) Just as it is harder for a thug to assault you from 20 yards away than when he’s right up in your face, you stand a  better chance of making it through what may be coming if you and yours are not in the immediate vicinity (or path) of the rampaging mobs. They may not even notice you – and more significantly, you will enjoy a greater likelihood of noticing them before they notice you. In old-school cowboy lingo, this means getting the drop on them. And that can be the difference between life and death as much as having some food and other supplies stored up to get you through a few months of hard times.

In the most extreme eventuality – minions of the Clover State coming to round you and yours up for “relocation” to a FEMA camp or god-knows-what-else in the immediate aftermath of a SHTF-type scenario – you have the option of just… disappearing. Of going off the grid, into the heart of darkness. It will not be easy. It will certainly not be pleasant. But it is much more pleasant than the alternative.

I am in my 40s now and like most people in that age bracket, I like my comforts. I enjoy having my motorcycle and car projects; even doing the chores around the place that need to be done. But if the S does H the Fan, I will do everything in my power to make it through to the other side of whatever’s coming, which will hopefully be something better than what we have now. But above all else, I will not Submit and Obey. If they come for me and mine, if they are not willing to leave us be in return for us extending the same common decency toward them – well, then we have options.

Because we have some land.

If you are reading this, there is still time for you to do the same. I hope you will consider it – and I hope you can make it happen.

Meanwhile, let’s hope for the best and that all we’ll be doing next summer is cutting the grass…. .