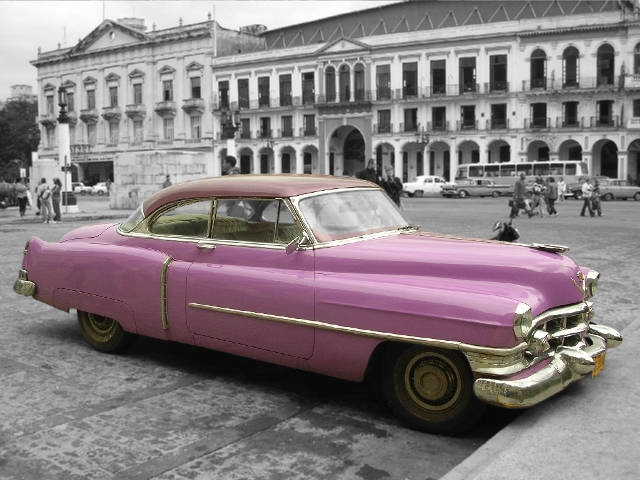 In Cuba, they’re still driving cars from the ’50s. Not to antique car shows on nice Sunday afternoons, but every day.

Soon, most Americans won’t be able to afford new cars, either.

Whatever ephemeral, manufactured, smoke-and-mirrors “growth” the economy has supposedly undergone since the last collapse, back in ’08, has just been undone, son. We’re back to where we were – only we’re worse off this time. Because the jig is up. It is no longer insider baseball that the U.S. economy is in its late – probably terminal Ed McMahon stage: Old, tired – and broke. You can only spray so much ether into the carburetor… and people are cluing in. Not just the elites in DC and New York who run the show. Us. You and me and thee.

We’re on to the con.

In the space of about four days (since last Friday) the Shyster Market has lost 4-10 percent of its value – value that may have been entirely paper value but nonetheless, the effect on the paper sent to millions of Americans (their next 401k statements) is going to be less-than-stimulating. Correction. It will stimulate them. But in an entirely different direction than the cheerleaders of “recovery” intend, hope and pray. It will make the sensible (yes, such still exist) batten down the hatches, where previously they perhaps had them open juuust a crack, suspicious but cautiously hopeful. No mas. Only an idiot (or someone who no longer cares about tomorrow) would continue to spend more than absolutely necessary for everyday life in this pre-Weimarian nightmare that is early 21st century America.

Meanwhile, life is going to get much harder for the not-sensible;  the people who live on credit, in the moment – and well beyond their means (just like Uncle). It is a safe bet that interest rates are going to skyrocket while the value of a dollar plummets and the price of commodities goes through the proverbial roof. This triple tag team will make loans unthinkable – and new car purchases all-but-impossible for anyone who can’t lay a stack of bills on the table, a la Tony Montana.

Is it even necessary to ask how this will affect the car industry? Buying a new car – when not absolutely necessary – amounts to a vote of confidence in the future. It reflects the buyer’s belief that he will be able to pay for it; that his job will be there tomorrow – next year – and that he has the luxury of disposable income to spend on something “extra.” How optimistic is America feeling right now? Imagine how optimistic most Americans will feel when they discover they’ve been cheated (again) out of (for most 401k holders) thousands of dollars they thought they had last week.

The big question (well, one of the big questions) is whether the industry can survive another street beating in the space of less than four years. Ford is doing ok but GM (and much more so) Chrysler-Fiat are still pretty rickety. None of them can probably withstand a protracted downturn.

Meanwhile, the Great Seer in the White House – with his usual impeccable timing and mastery of all things economic – has just imposed another billion-dollar-mandate on the car companies; a near-doubling of federally-required “fleet average” fuel economy requirements – known inside the Beltway as CAFE. The Car Czar has decreed that new vehicles shall be “x” more fuel efficient – without also telling the rubes that they will as a result also be much more expensive.

That, of course, doesn’t even factor in the great likelihood that the cost of a new car in two or three years is likely to be 5-10-20 percent more than it is today even without the add-on costs of CAFE as a result of “QE3” (more Fed funny money “stimulating” the dying economy) and all the rest of it, including possible double-digit interest rates to compensate lenders for the effects of the former.

The ultimate result of all this will probably end up looking something like an American version of Fidel Castro’s Cuba. We already have the bleak, dead-looking cities; listless people shuffling around with little more to look forward to than their next slice of government cheese (for as long as that lasts). All that differentiates the United States is the still-extant appearance of prosperity.The shiny new cars we see all around us, in particular.

But it is a mirage.

If you were to put a big red dot on every car currently on the road that’s still being paid for, it would amount to more than half the cars on the road. Of these, a large percentage – around 20 percent – are “under water” (the owners owe more than the car is worth) just like the suburban McMansions many of these same people live in. For now.

The people driving paid-for cars are going to hold onto them – and forget about buying a new car. The people driving cars with outstanding notes aren’t going to be buying anything, anytime soon. And the rest – the Payday Lender frequent flyers and equity-spending “consumers”? Well, the music has stopped and all the chairs are occupied. Sorry.

And where does that leave the car industry?

Reader Question: The Future of Diesel?