Sometimes, being second in line is the best place to be.

For example, letting someone else buy you a discount on a great new car. He gets it first – but he also gets to pay full mark-up – as well as absorbs the depreciation in value that occurs during the first few months of a new car’s life.

If you check into it, you’ll discover that some models are particularly exceptional buys the second time around – largely because of the 20-30 percent (or more) difference in their retail value from showroom new to just a year or two old.

For the most part, there is nothing wrong with these cars in terms of function or reliability. Some simply had inflated prices when new due to being “the latest thing” – a case in point being the Chrysler PT Cruiser. When it first appeared, some dealers were getting $25k or more for cars with an MSRP of $17,000 simply because it was “hot” and “new.” In recent years, the PT – now very much passe – sold for less than sticker new and slightly used ones could be had for fire-sale prices.

Or, let’s say a manufacturer launches a car with high expectations – and a high MSRP – but it doesn’t do as well as hoped for one reason or another. An excellent example is the Volkswagen Phaeton – an uber luxury sedan with a base price of $66,950 that could go as high as $100,000 when equipped with every available option. The Phaeton was VW’s first foray into the very high-end luxury segment – but as nice a car as the Phaeton was, people weren’t lining up to pay Mercedes or BMW money for a Volkswagen. VW just doesn’t have the name recognition as a premium brand on par with the established luxury brands. As a result, one could buy a two-year-old Phaeton for half or less the original sticker.

Here are some other cars that are steals the second time around: 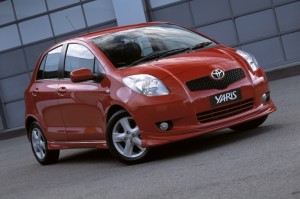 A new, much-updated version of Toyota’s entry-level subcompact sedan/hatchback just came out this year (2012) which means the previous version – which was a little homely and more obviously an economy car – is now a much better deal.  It’s also a great A to B commuter that is simple, known to be reliable and capable of 40 MPG on the highway. The ’12 Yaris starts at $14,115 but you should be able to nab 2-3 year old Yaris for around $9k or so. The car was the same from  2007 to 2011, so the older the better, as far as price goes. Current retail prices on the 2007s are in the $6-$7k range – half the cost of the base price of the 2012 model.

For whatever reason, Nissan decided to stop making the “tall roof” version of the Versa 1.6 sedan this year. Now, the low-cost version of the Versa is only sold as a conventional compact sedan. To get the much more roomy (especially back seat) version of the Versa, you’ve got to buy the Versa 1.8 – which starts at $14,480 vs. $10,990 for the Versa 1.6 sedan. But if you go back just a year or two, you can get the “tall roof” bodystyle and the more economical 1.6 liter engine in the same package – for a lot less money. How much less? According to current used car retail value guides, 2010 model Versa 1.6s are selling for around $7,800. That’s barely two years old – and about half the price of a new Versa 1.8 “tall box.” 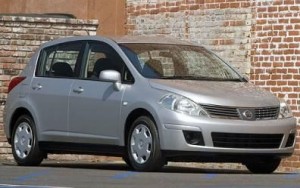 Like the Phaeton ultra-luxury sedan of the early 2000s, the Eos over-reached a bit.  It is very expensive – new. The 2012 version of this retractable hardtop 2-plus-2 is $34,350 – well into BMW/Audi/Lexus territory. But as nice a car as the Eos is, it’s still a VW. Not that there’s anything wrong with that. It just means they’re not selling very well – and when they do, they depreciate rapidly. Current used car guides have the first-year ’07s pulling in only about $14k – and barely three-year old 2009s going for about $20k – a $14k discount over the base price of a new (and basically the same) 2012 Eos. 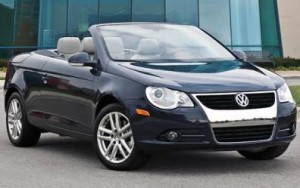 This one’s a little dicey but could be a great deal. Saab is now out of business but just before the curtain fell, it launched an all-new version of the 9-3. It is arguably the best 9-3 Saab ever made, too. Unfortunately for Saab it was too little, too late. But this might be fortunate for you. The 9-3’s turbocharged 2.0 liter engine is a GM-sourced engine (GM owned Saab until just before The End) identical to the 2.0 turbo engine used in a number of current GM cars, such as the Buick Regal GS. So, it should not be difficult finding basic service parts for the engine. But be aware that other parts might be harder to find – especially trim pieces. The key factor here is that the market value of Saabs is plummeting to the ocean floor just like the Titanic did 100 years ago. A new 9-3 that stickered for almost $40k last year can probably be acquired today for $30k or even less.

The reincarnated muscle car legend suffered from anonymous styling – and first-year(2004) models were  really hurt by the hardly-secret news that GM planned to increase the car’s engine size and power substantially for the ’05 model year. Why buy a 350 horsepower GTO with a 5.7 liter V-8 when, a few months later, you could buy a 400 horsepower one with an even bigger 6 liter engine? The value of those first-year GTOs is lowest – retail value guides list them averaging just over $10k. And even the later, more powerful versions are dirt cheap relative to equivalent-performing new stuff. The ’06s, with 400 hp, cost about $14k now – which is around $6k less than the price of a base V-6 2012 Camaro or Mustang and about half the price of a new V-8 Mustang GT or Camaro SS. Remember: The GTO’s running gear – engine/transmission, etc. – is shared with the Camaro and Corvette. So service and maintenance is no problem, even if Pontiac sleeps with the fishes. 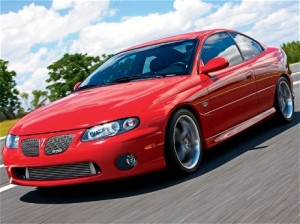 This one has several things going for it – for you. One, it’s a good car. Even though it’s basically a rebadged Ford Fusion, the Fusion is a solid, attractive, well-built and comfortable mid-sized family sedan. And so is the MKZ – only it’s nicer, because Lincoln added lots of luxury features (such as heated leather seats, a better stereo, etc.)  to justify the higher price: $34,755 new. Unfortunately for Lincoln – but fortunately for you – badge-engineered luxury cars aren’t selling well and depreciate rapidly when they do. Two-year-old (barely) MKZs are retailing for around $20k, according to the used car price guides. Go back to ’08 or ’07 and you can pick one up for about $12-$13k, less than you’d pay to buy a new base model compact economy car.  Prices on used MKZs ought to get even better in the near future, because an updated MKZ is on deck for the 2013 model year – which will probably cause the older versions to depreciate even faster. 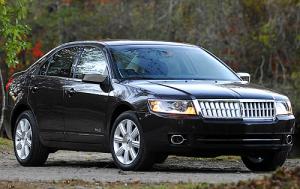 This large, four seat (four real seats, including adult-usable back seats) convertible is one of the few pre-Fiat (and pre-bankruptcy-bailout) Chryslers that’s not only worth considering but ought to be considered a great buy – because it is. It’s a very pleasant cruise-mobile in its own right – the only large convertible that isn’t also a $50,000 convertible. But the other thing to know is that while it was technically retired after the 2010 model year, its replacement, the current Chrysler 200 convertible, is basically the same car under the skin (the current model even has the same base 2.4 liter engine under the hood). Yes, it has been updated and improved – and so has the price: $26,775 to start. Meanwhile, you could snap up a slightly used 2010 model for under $15k. That’s a discount sufficient to overlook the mostly minor updates you’d get in a 2012 200.