There are two battery-related challenges to owning an old muscle car. 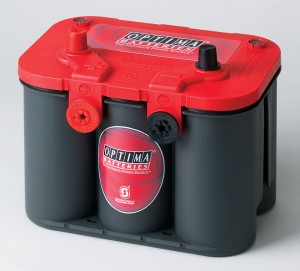 First, the old beasts can be hard to start – especially if the engine is a big V-8 with high compression, which makes it tougher to crank – which places high demand on the battery.

Second, classic cars often sit for weeks at a time,which can be harder on a battery than daily use because it’s not being constantly recharged by the car’s charging system – which of course only works when the engine’s running.

A solution to both problems could be a high-performance battery such as an Optima spiral cell (see here).

These batteries – available in both current 12 V and 6 Volt versions for antique vehicles – are physically and functionally different from conventional batteries. Each battery contains six spiral cells (instead of plates in line) that wind around a central core. Instead of liquid electrolyte sloshing around between the plates as in a conventional battery, the Optima’s electrolyte is held in suspension on absorbent mats that act like a sponge. The design allows more total plate surface area, which results in superior performance in a compact design that is also leak-free and corrosion-free, because there is no flowing electrolyte. Even turned upside down, it won’t spill – because it can’t spill. 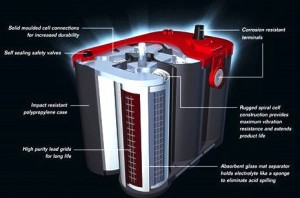 When you hit the ignition key, Optima claims you’ll get the “strongest 5 second burst” of power available, which should make starting even the hairiest big block a snap.

I got one (RedTop version with 1,000 cold cranking amps) recently for my 455-powered ’70s-era Pontiac Trans-Am and the results were excellent. Where the old battery – a conventional plates-in-a-row type – often noticeably strained as it tried to rotate the big V-8 despite having the same exact same 1,000 CC amps rating, the Optima spins the 455 over as easily as the PR materials claimed, with a near instantaneous start. I also really like that the Optima is completely sealed and leak-proof. No more acid-rot on my battery pan and inner fender liner.

Superior hot-start performance – a big issue for muscle car owners – is another plus. With the old-style battery, my Pontiac would sometimes not re-start until it had cooled down for 20 or 30 minutes. So far, no such issues with the Optima. 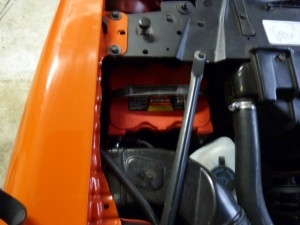 The design is also better able to withstand vibration (another issue for muscle car owners, especially if your car has a lumpy cam) and because the battery is completely spill proof, you can safely mount it in the trunk, even  on its side, if you wanted to.

An Optima battery is more expensive up front (about 40 percent more than a similarly rated, plate-type premium battery) but in addition to being able to start your car reliably, every time, the Optima will last longer because the spiral cell design is inherently more durable, doesn’t shed lead paste (as happens routinely with the plates-in-series suspended in electrolyte fluid found in a conventional battery) and can take being “cycled” (discharged and recharged) more often without affecting its ability to hold a charge. The increased surface area of the spiral-wound cells, meanwhile, also gives faster recharge times. (More in -depth technical date here).

One more plus: Optima batteries are generally a bit more compact than the units they replace, which helps with installation and mounting. In my case (’70s-era Pontiac) getting the battery in and out is now a lot easier. The unit also came with the same factory-type side terminals as the OE battery, so the stock cables bolt right up. The only downside, other than the higher cost, is that these batteries are clearly not “factory” in appearance – which some hobbyists won’t like because it can cost them points at old car shows. I’m not a fanatical purist. I like my old stuff to work. So I’m ok with this. Of course, you could always rig a dummy box (or cover)  that looks like the factory battery, and slip the Optima inside. 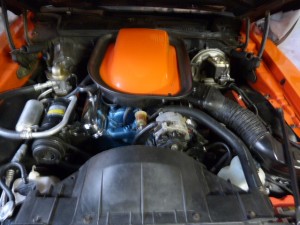 The RedTops are available for pretty much any classic muscle car and are ideal for modified vehicles and hot rods. If you have a lot of aftermarket electronics, Optima’s YellowTop line is what you want. In addition to the superior starting power of the RedTops, the YellowTops are designed for maximum cycling (discharge/recharge) capability. As such, they’re well-suited for use in hybrids (see here for info about that).