Now we can’t lawfully speak or peaceably assemble. Not within earshot or sight of those who rule us, at any rate. 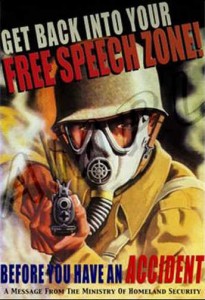 HR347 – the Federal Restricted Buildings and Grounds Improvement Act is now “the law.” (More accurately, an updated version of the Law to Remedy the Distress of People and Reich. The phraseology and cadences are becoming so familiar, aren’t they?)

It codifies the federal government’s practice – ever since the days of The Chimp – to shunt protestors into what Judge Andrew Napolitano rightly calls No Speech Zones and more,  expands on it – criminalizing mere speech, mere peaceful assembly, if it “impedes or disrupts the orderly conduct of government business or official functions” – as defined by the agents of the federal government. The language is so sweepingly vague it amounts to carte blanche suspension of the First Amendment whenever and wherever the government so decides.

Heckling – or even standing silent with a protest sign could and will be construed as “impeding” and/or “disrupting” the “orderly conduct of government.”

And the punishments for transgressing the new befehl are severe: As much as ten years in prison and an unspecified fine. The minimum sentence is up to one year in prison and an unspecified fine. No more plastic handcuffs, temporarily fitted – a short ride to the pokey and a misdemeanor fine (even that is an outrage, of course). Henceforth, “offenders” will be facing life-changing hard time. Even a month or two in the clink is enough to result in the loss of one’s job – and with that, the cavalcade into destitution begins. A year in jail and it’s over for most people. Ten years? For “impeding or disrupting the orderly conduct of government business or official functions”? In other words, for heckling a pompous politician? For denouncing ObamaCare? For causing Obama (or Romney or any of the other front men) to see or hear  dissatisfaction with their rule?

Rapists are treated more gently. Of course, rapists – and murderers – do not offend against the state. It is a key thing to grasp. They merely trample upon the rights of other people. And they – the people – don’t matter.  As George Orwell’s Winston Smith explained in 1984, the real crime is political crime; i.e., dissent. In his dystopia, ordinary criminals were likewise treated almost kindly – relative to the consequences that awaited Thought Criminals such as Winston Smith.

The chilling effect this will have on (formerly) free speech will be extreme. How many will dare to say anything – to even stand on a street corner – in the face of this? Which is precisely the object of those behind the new law.

This is a history lesson in process. 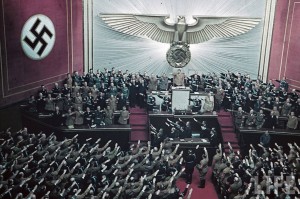 People often ask, couldn’t the Germans see it coming? Why didn’t they do anything?

We’ve already surrendered our (former) Fourth Amendment and Fifth Amendment rights. We are subject to random – and thus, utterly unreasonable – searches. Exactly the same as was done to Germans in the ’30s and the Soviets for most of the 20th century. And we’ve accepted it on the same grounds – “safety.” We must Do Something about dangerous drunk drivers. And what we did was give up our former right to be searched only after we’d given cause to suspect a crime had been committed (or was about to be committed) by us; i.e., by a specific individual – not just anyone or a member of some vaguely defined group (e.g., “motorists” or “air travelers”) based upon specific probable cause, usually supported by a judge-issued warrant. Now that’s all out the window. And thus, we may be searched whenever, wherever – without even the pretext of probable cause. Now 80-year-olds and five-year-olds must submit to having their crotches palpated. Armed goons are at liberty to detain us and demand “our papers” literally anywhere. We are not even safe and secure inside our homes. The armed goons can bust right on in – and if we do anything other than go immediately limp, we are guilty of “resisting” and can expect to be Tazered or shot, then charged and prosecuted. All in the name of “officer safety,” of course. The officers can’t be too safe. Check Vons Ad and Jewel-Osco Ad. We expect no less of these heroes. (Notice here again the verbiage that echoes through the ages: Deification of the goons with guns, in blue and black suits – and cammo, too. And the iconography – the wearing of the symbol of the partei on every official lapel. )

We are now required under penalty of law to provide evidence that will be used against us in a court of law. Not merely information, either. Our physical bodies may be thrown across the hood of a cruiser and our bodily fluids extracted as evidence. 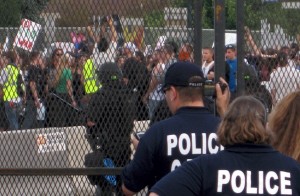 Because some people bought into the argument that this sort of thing would make us “safe.”

Well, how safe do you feel when you see a cruiser in your rearview – or a “safety” checkpoint up ahead?  When your most intimate areas are being fondled in public by a complete stranger? When you are forced to throw your arms up in the humiliating “I surrender” pose?

How safe do you feel knowing that you are subject to being stopped at any time, having done nothing to warrant it – and if you resist in any way, you will be thrown face-first to the pavement, hog-tied and charged with a “crime”? That even your own home is no longer inviolate?

And now, you cannot even complain about it without risking a year (or ten) in the slam.

Where did we think this would end up? That is, where did those among you who endorsed all these things expect it would end up?

SmartCar Gets Even More Stupid