Yesterday, I needed to get some new Heli-Coil inserts to fix some damaged threads, so I hopped on one of my bikes and headed into town – “town” being Roanoke-Salem in southwest Virginia. On the way home, I encountered a traffic jam. This is a rare – almost nonexistent – occurrence down here. Almost always, there’s an accident and that’s what’s holding things up.

This time, Mittens was holding things up. 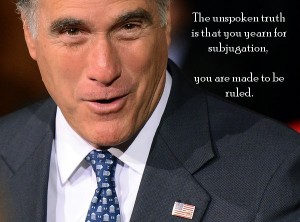 Mittens had come to town – along with his Praetorians, a motorized consort of black SUVs with black tinted windows and what appeared to be every cop in town (and perhaps the surrounding towns, too). “Keeping us safe,” apparently, takes a a back seat to keeping Mittens safe from us.

Mittens’ time is also valuable – while ours of course is not. A Praetorian had closed down the intersection I  – and dozens of other motorists – were hoping to pass through. The intersection we paid for, mind. But which Mittens and his kind may exert exclusive ownership over at any time.

For a long time, nothing happened.

Nonetheless, we were required – at gunpoint – to wait for the royal procession of the GOP dauphin. Any of us mere Mundanes who dared to perform a U-turn or do anything other than freeze in place risked the ire – and the gunfire – of the Praetorians. And so, we sat – and stewed. It was easily 90 degrees outside. But no doubt, Mittens’ chariot is air conditioned.

At least fifteen minutes went by; the cars were now stacked up for a good half mile – as far back as I could see, at any rate. I shut off the bike. Unlike Mittens, I pay for my own fuel and so try not to waste it. I suppose when you are the elected king and have unlimited access to the public exchequer then such things are not much bother. Only the “little people” pay for their own gas, after all.

Then, in the distance, a sound – and a flash! He was coming.

To the accompaniment of his Praetorians – blue lights flashing, surrounded by his protective begleitkommando – Mittens’ gigantic tour bus arrived. As it approached, emotion welled up within me and boiled over. I could not help myself. stood up and gave Mittens the universally understood “up yours” salute and jeered at the black-windowed bus as it passed by. It is my fervent hope that Mittens saw at least one proletarian who will not remove his cap and bend his knee when in The Presence. Who knows the emperor has no clothes. That he is just some guy – a guy who wields tremendous power, it’s true. But that’s just the point. Nothing makes Mittens – or any of them – worthy of deferential treatment. It’s just some guy.  Some guy – who wants to control your life.

Screw him! If you met such a character on the street – and he didn’t have Praetorians backing him – you’d probably tell him precisely that. The fact that most of us are afraid to do it when it’s Mittens – and his Praetorians – speaks volumes about the nature of our relationship to the government.

So, the experience was cathartic. I felt good for the rest of the day.

I wish more Americans would do the same – or similar. In fact, I regard it as essential that more of us do the same. That more and more of us refuse to be respectful. After all, what is there to respect?

It would be a healthy thing for liberty if creatures such as Mittens – and Barry and Newtie and the whole stinking gaggle of them – dared not venture outside their fortified compounds lest they see and hear and feel the utter, withering contempt in which they are held by those they imagine themselves born to rule. 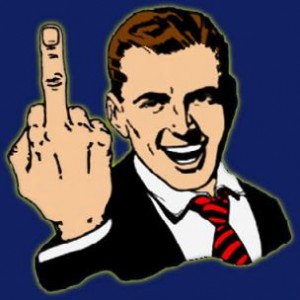 By people who cherish liberty – and so, despise them.

Caesar Augustus was more in touch with the average Roman than these latter day Elagubali  – and in defense of the imperator, Augustus had some admirable qualities.He was not a poltroon. And he did exhibit a degree of civic virtue.

But these people? Glad-handers and tools. Front men for money men – not the honest kind who produce wealth. Rather, the kind that manipulate money. Other people’s money. Street corner shysters in $3,000 suits – paid for with money stolen from the citizenry. Disposers and redistributors of  other people’s life’s work. Mass murderers, who glibly throw away other people’s lives.

The pomp and circumstances accorded these cretins is literally sickening. Even more so the way most people deferentially oblige. The  expressions of reverence whispered by the average American toward the presumptive Imperious Leader – the would-be auctioneer of other people’s liberties. These beady-eyed hustlers and power-lusters. These dissemblers and demagogues.

It is a bleak thing indeed that so many people no longer reverence their rights – and instead instinctively defer to any manifestation of power that intends to deprive them of their rights.

They are in awe of power.

Which renders them very small.

Whatever happened to the America – to the Americans – who didn’t like being told what to do? Who respected authority only when it respected them? When did this nation become a collection of servile, scraping submissives? Of eyes-lowered authority lovers?

I view the likes of Mittens as unworthy of the respect I owe any honest laborer – including the humblest ditch digger. Because that ditch digger is doing an honest job – and isn’t putting a gun to my head and telling me to like it as he smiles through his set of $5,000 capped white piano-peg teeth. He has earned the right to be respected. But Mittens? Or The Chimp? Or Barry? Or any of them (excepting of course Ron Paul)… ? They are less deserving of respect than a common street thug. Because at least one has a sporting chance against the thug – and no common thug would have the audacity to insist that he was “helping” you by victimizing you – and expect you to thank him for doing so. We’d kick him in the balls the moment we had the opportunity – and would feel great if we succeeded.

Americans need to get off their knees – and give creatures such as Mittens, et al, a healthy rebel yell. Or maybe the “up yours” salute.

They have earned it.

A Smokey & The Bandit Experience