AW11 is the chassis code Toyota assigned to the mark 1 (first generation) MR2 when it was introduced in 1984. It has affectionately become the nickname of all first generation MR2s (similar to the RWD Corolla with chassis code AE86 being called the Eight-Six). The MR2 was a two-seater rear wheel drive mid-engined sports car that wasn’t a European exotic. The engine (4AGE) was designed by Toyota with Yamaha (cylinder head) and a supercharged version (4AGZE) was soon developed as well but not made available to the USDM until 1988. 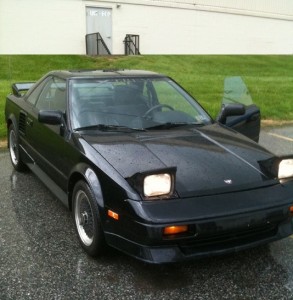 My pops bought a 1989 supercharged model brand new. This was only an option in the US for ’88 and ’89. It’s still parked in his garage and is driven sparingly (195K+ miles). I spent many hours of my youth in that car, great times. Right before I turned 17 I bought a 1991 MR2 turbo (SW20) and drove the piss out of that car for 4 years. I did a lot of stupid things in that car but it protected me (hey, I am still here today) and it taught me how to drive properly and improperly.

I have owned quite a few vehicles since I sold that turbo, a Civic Si and even a Suzuki GSXR 750 to name a few but they didn’t feel right. The mid engine layout not only offers nearly 50/50 weight distribution and turn on a dime capability but has unique characteristics – for example, when under hard braking, the nose doesn’t dive like a normal car. Basically it just feels different. In May of 2010 I stumbled across an ’89 supercharged MR2 being sold by the original owner on craigslist (pic above) and decided to buy it for a very fair price.

I drove it that summer and shelved it for the winter in our 2-car garage. My wife and I found out we were going to be blessed so the spring was dedicated to painting/prepping and setting up the nursery. But once that was done my wife’s car went outside and the MR2 was centered in the garage and the work/fun started.

Here are a few pics before “surgery:” 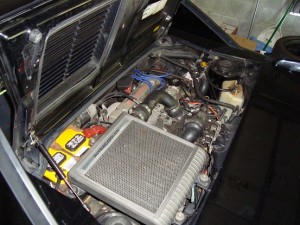 I also built up a cache of parts from Two’s R Us (some pictured here). I still haven’t added up all the receipts for the parts, I don’t think I want to know how much I actually spent.

Pulling the motor out of an MR2 can be a little tricky and challenging, disconnect everything, driveshafts, fuel lines, feed the wiring harness thru the firewall etc… but this car’s setup is essentially a front wheel drive transverse mounted engine but in the rear. The compartment is pretty tight for the regular 4AGE so the addition of a supercharger and piping on the 4AGZE makes you wonder what the engineers were thinking. And the amount of coolant I drained out was ridiculous. 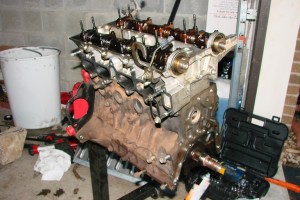 I proceeded to work on the engine. It had good compression and I didn’t have time to do a 100% rebuild so I left the top end and bottom end as is. I wanted to be able to have it ready for the summer and I am buying a spare motor to rebuild perfectly over the next year. That way it will only be off the road for a week when that swap is ready.

All the gaskets and seals were replaced, the distributor was rebuilt along with a new oil pan, starter, alternator. I also swapped out the crank pulley with an NST unit (red anodized), the SC was replaced and with a re-routed vacuum line setup boost can reach 13.5 psi (up from the stock 7psi). I also added a boost gauge to keep tabs on the pressure and the “Grunt Box” to prevent the lean condition at lower rpms. While everything was apart I added a Fidanza flywheel and Clutchmasters Clutch.

Getting the engine back is pretty straightforward. Here’s the empty engine bay, to make it easier just remove the rear trunk lid and spoiler.

With the engine back in place, it took a little while to get all the wiring properly rerun, the nest of vacuum lines properly hooked up and after fixing a fuel leak it was mostly buttoned-up. Bleeding the coolant system is somewhat of a challenge with this car. The radiator is in the front so with piping running the length of the car you will need 12.8 liters of coolant! It actually holds a nearly identical volume of coolant as my Tundra. Bleeding air bubbles tends to be more of a chore than the average car. It took me about 2 hours to get it purged (have been told it takes about 45 mins for a seasoned mr2 mechanic to do it). The front and rear suspension components were finally completed and installed. 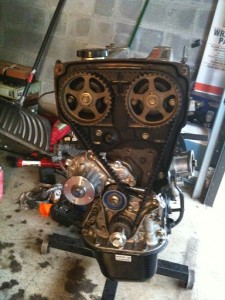 I have typically done most of the necessary routine maintenance on my vehicles and have helped with about half a dozen engine swaps, clutch replacements and various overhauls but I never attempted anything this involved completely on my own. It didn’t end when the motor turned over. Setting the timing with the aftermarket pulley kit was a challenge and working out all the various bugs like replacing a malfunctioning VSV no longer available from Toyota and researching/determining the suspension settings I wanted all gave me a great learning experience. Replacing the speakers and head unit and steering wheel rounded out the remaining changes. I really thought I knew MR2s before, but I didn’t. My recommendation to everyone out there: Get the shop manual for whatever car you own, a decent set of tools and start figuring things out by doing them; there are few things more empowering than truly knowing your car.

When Clovers Kill (Or Try To)