Clovers are ok with the American Police State because to them, it’s not a police state. They see no imposition – much less tyranny. They see “democracy,” lawful order. The flag – and (to them) freedom. The mindset is nicely articulated by the well-worn Clover cliche: “If you just obey the law you won’t have any problems.” 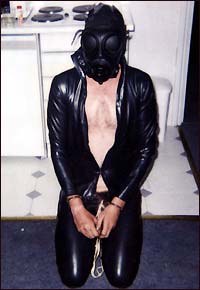 It’s circular reasoning, obviously – with the circles becoming ever tighter as they spiral down toward the drain into outright and abject slavery. Which even then, Clover will not see as slavery. He will still be free to act, he thinks – provided of course that he acts within the boundaries laid down for him. In the same way a slave was free to pick cotton; or the medieval serf free to farm his small plot… so long as he gave his Lord the specified portion of his crop.

Clover does not grasp that each time he submits, he has surrendered a piece of his life. And much worse, the lives of others, too.

Eventually, there will be nothing left to surrender.

But this ugly inevitability does not trouble Clover. He agrees to allow others to direct and control his life, to make his decisions for him. And because he has accepted this “direction,” so also must others. If they do not, if they object in any way, then they deserve what comes to them.

It will please Clover to see them punished.

Yet this is precisely what Clover does in fact demand. And it’s the reason why Clover gets absolutely furious when they do not comply.

The other day, my wife went to the post office in one of our trucks. I had peeled off the old (out of date) state “safety” inspection because I figured this would be less conspicuous to any passing costumed enforcer. My wife encountered a Clover instead. She parked in front of the post office, and as she was exiting the vehicle, an angry little man lectured her about the absence of the “safety” sticker on the truck. Since he had to waste his time and money on a “safety” inspection, it infuriated him to see someone else who had not yet submitted. Rather than be angry with the Police State and its minions, he had become a minion himself.

We see this kind of thing all over nowadays. Most recently in the tattle-tale campaigns of the Department of Heimat Sicherheitsdeinst that counsel, “If you see something, say something.” For example, there’s the case of Brian Loftus. He went to a local gun store and bought several boxes of ammunition for target shooting. Still legal in this land of the allegedly free. Except, someone “saw something” – and “said something.” Which led to Loftus being telephoned and interrogated by the state police. (See here for the story and a video of Loftus.) In Cloverstan – er, America – there is no problem. Loftus should accept that the state police police were just “trying to keep us safe.” Clover cannot fathom the man’s anger; in fact, it makes Clover angry that anyone would get angry about such a thing.

After all, if he had nothing to hide… .

Similarly, the also-recent case of a sixteen-year-old student who got a visit from FBI thugs because of the pro Ron Paul (and police state critical) video he had put together for his high school government class. “We need to talk to your son,” the FBI thugs intoned when the kid’s mother answered the doorbell. They then tried to intimidate the kid into becoming an informant. To infiltrate – and rat out – online groups and individuals that seem to have an “anti-government” (that is, pro-liberty) attitude.  He declined. (See here for that story.)

On the road, Clover goes ballistic when someone else declines to obey “the law” – not because of any objective danger, but because they have declined to obey. It drives them absolutely out of their minds. Check CVS Ad on WeeklyAds2. And the assertion that it’s not any “danger” represented by the law-ignorers, but rather the fact that they have dared to ignore the law, that enrages the Clover is clearly backed-up by the classic example of the Clover who uses his car to prevent another car from passing. Though the Clover reviles “speeders,” he himself will speed – in order to thwart a passing attempt by another driver. He will use his car to block other cars – deliberately, recklessly. Because he cannot stand the idea that anyone might violate the law he worships in the same way that a jungle savage worships a shrunken head.

Clovers at the airport get upset when a traveler dares to assert his fourth amendment rights. Clovers manned the camps in Germany and Soviet Russia, in Cambodia and Cuba. And they will man them here, too.

Clover cannot abide outliers, people who prefer to live their own lives (and leave others free to live theirs). It is exactly like the medieval church and its anathemas and burnings at the stake; its insistence upon absolute catholicism – and utter submission. Any deviation from the orthodoxy cannot be tolerated – not because the “deviant” seeks to deconstruct the hierarchical coercive collectivism of the institution – but merely because he wishes to be free of it. Which amounts to the same thing. Because if someone is allowed to be free – to go in peace – then potentially, everyone may go in peace.

And that simply cannot be tolerated.

Clover knows it – and will literally kill to prevent it.

Cloverism represents humanity’s Dark Ages – an atavistic (perhaps stunted is the better word) intellectual-moral mindset that lingers still, despite the surface trappings of modernity, technology and civilization – and which always threatens to return humanity to a literal Dark Age.

If enough of us allow that to happen.